Ankit Rajpoot's 5-for, versus Sunrisers Hyderabad, is the sixth best spell in IPL history. It included 17 dot balls.

Ankit Rajpoot of Kings XI Punjab (KXIP) returned figures of 4-0-14-5 against Sunrisers Hyderabad (SRH) in Match 25 of Indian Premier League (IPL) 2018, at Rajiv Gandhi International Stadium, Uppal, Hyderabad; these are the sixth-best figures in IPL history. Rajpoot started by having Kane Williamson caught at mid-off by Ravichandran Ashwin with his fourth ball; with his eighth ball he had Shikhar Dhawan caught by Karun Nair; and with his 17th, Wriddhiman Saha, caught by Andrew Tye.

Rajpoot returned for the final over of the innings, where he bowled Manish Pandey with the fourth ball; two balls later he had Mohammad Nabi caught by Mayank Agarwal. Here are the best figures in IPL history.

As is evident from the table, Rajpoot s figures are now the best for KXIP. He beat Dimitri Mascarenhas s 4-0-25-5 against Pune Warriors India at Mohali in 2012. Adam Zampa (4-0-19-6) still holds the record for the best figures against SRH. Rajpoot also beat Rajasthan Royals s James Faulkner s 4-1-16-5 against SRH in 2013, the best figures at Uppal before today. 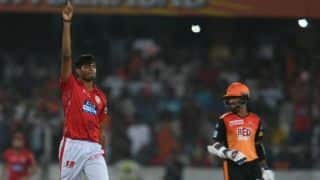