Sunrisers Hyderabad would look to select players with a view of not increasing Bhuvneshwar Kumar's workload, and fill in some handy contributors down the order.

The Indian Premier League (IPL) 2018 player auction is just a few days away. The hype and media attention is such that it has put the India-South Africa Test series in the backseat (Of course, Proteas’ unassailable lead helps too). With Chennai Super Kings, Mumbai Indians and Royal Challengers Bangalore retaining their core players MS Dhoni, Suresh Raina, Ravindra Jadeja and Rohit Sharma, Jasprit Bumrah, Hardik Pandya and Virat Kohli, AB de Villiers respectively, Sunrisers Hyderabad aren’t far behind. By retaining their batting and bowling department spearheads David Warner and Bhuvneshwar Kumar respectively they would look to strengthen their chances by creating a balance between young and experienced players.

According to Right to Match (RTM), every franchise is entitled to retain three Indian players, two overseas and three uncapped Indian players. Sunrisers have two slots for retaining Indian stars, one for a foreign player and three uncapped players. They have always depended on their top order, and filled in variety in their bowling lineup. With Ashish Nehra’s retirement and Mushtafizur Rahman’s scratchy form (coupled with long layoff due to injury), the one-time champions would look to select players with a view to not increase Bhuvneshwar’s workload, and fill in some handy contributors down the order.

Shikhar Dhawan a sure shot choice?

Sunrisers would most likely go for Shikhar Dhawan. Dhawan and Warner have formed a formidable opening pair for the franchise. Both the left-handers compliment each other very well, and know how to work on their strengths and weaknesses collectively. In addition, Dhawan has looked tentative at start but grown in confidence courtesy Warner’s presence and blitz.

In the last two editions, Dhawan has averaged more than 35.

No prizes for guessing. It would be a sin if Sunrisers overlook Afghanistan sensation Rashid Khan. In 2017, Rashid ended as the third-highest wicket-taker in the shortest format. In 10 T20Is, Rashid attained 17 scalps with the best economy rate and average among the top five bowlers.

Bought in 2017 for INR 4 crores, Rashid didn’t disappoint Sunrisers’ camp. He picked up 17 wickets at 21.05 and economy of 6.62. Further more, he enjoys good support of coach Tom Moody and skipper Warner. His BBL and CPL heroics makes him a strong contender overall.

This would take some thinking. Nonetheless, Sunrisers aren’t out of options. Siddharth Kaul did a splendid job for the franchise, bowling in the ‘crucial’ death overs versus the best in business Dhoni, Steven Smith, Kieron Pollard etc. To accompany Kaul, Sunrisers may even retain Vijay Shankar. Shankar, recently being appointed as Tamil Nadu skipper in Syed Mushtaq Ali Trophy, has improved leaps and bounds. He is a composed batsman, and has shown his potential through ‘occasional outbursts’ with the long handle. Sunrisers would have an eye on the youngster to handle the lower order responsibilities.

After retaining their players, Sunrisers would look to build a new team around their ‘core members.’ They have plenty of options. Warner would be keen on having his Australia opening partner, Aaron Finch, in the Orange Army. Finch has been in phenomenal form, and can bat anywhere from No. 3 to 6. Kane Williamson seems a lost name, and may get replaced by England Test skipper, Joe Root. Root showed his inclination towards the mega tournament, and can be a like-for-like replacement for Williamson.

T20 franchise cricket has caught the viewers attention worldwide. Every league produces new match-winners, and few among these will be ‘hot property’ in the IPL auction at Bengaluru. Some of them are as follows: DA’rcy Short, Alex Carey, Ashton Turner, Jofra Archer and Joe Burns. 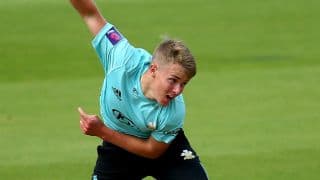