The 11th edition of IPL could witness the rise of the Kings from the land of green revolution, leading domestic T20 supremacy.

Picture Faf du Plessis donning the red and silver jersey of Kings XI Punjab (KXIP) against his former team Chennai Super Kings (CSK); an unimaginable scenario, right? According to KXIP CEO, Satish Menon, du Plessis could be the fulcrum of Punjab s most adored and treasured sports side. The good thing about the fate is that it will change one day. Last few years haven t been good for us. Fans still supported the team during the bad times. And they want better. You may never know that we might resurge in this season with Faf du Plessis as the Kings XI Punjab s skipper, Menon said.

They retained only Akshar Patel and now face a problem of plenty with a purse of INR 67.5 Crs. With 2 RTMs in the kitty, KXIP could possible knock over the biggest takeover in IPL auction history. Still to win an Indian Premier League (IPL) trophy, this season might just help Punjab reclaim their kingdom, once again.

Under Virender Sehwag s directions, KXIP showed sparked of brilliance but dried out more often than anyone would have liked. Sehwag has always liked players who are hard-working and adapt according to the situations than just go all out.

Sehwag did hint the franchise could pick Harbhajan Singh and Yuvraj Singh, giving the side a desi Punjabi tadka’. He also mentioned that KXIP could deploy the RTM for Maxwell and David Miller. .

Punjab , however, will like to keep their face since IPL 2008, Shaun Marsh in the side as well. Hashim Amla was a revelation for them in IPL 2016, accumulating 420 runs including 2 hundreds. Another player KXIP could not do away is Marcus Stoinis. Stoinis IPL run was cut-short to an injury last time but his stokes could sell like hot-cakes.

Shubman Gill could be snapped by Punjab as he falls under their catchment area. His form for India Under-19 has been phenomenal. Another player that Sehwag would be keen on purchasing could be Anmolpreet Singh. Add to the mix, Akshar and Punjab has a young potent Indian contingent. Manpreet Gony might just find his way into the side, courtesy a brilliant run in Ranji Trophy. One bargain player for KXIP could be Tom Curran, who has a base price of 1 Cr.

The 11th edition of IPL could witness the rise of the Kings from the land of green revolution, leading domestic T20 supremacy. 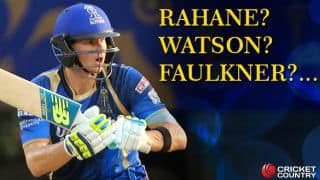