With Rajashtan Royals' about to commence their second innings post spot-fixing saga, Steven Smith returns to mark his second association with franchise.

January 4, 2018: BCCI released a list of players retained by all franchises ahead of Indian Premier League (IPL) eleventh edition.

With the magnanimous success of the first ten years, the upcoming season promises to take the league forward. Every team had their players released, and got their ‘core members’ retained ahead of IPL auction in Bengaluru. With Rajashtan Royals‘ about to commence their second innings post spot-fixing saga, Steven Smith returns to mark his second association with franchise.

The captain is the boss of the team

You may have come across the above phrase several times (during one of Ravi Shastri’s mandatory Kohli-praise mode). Royals retained only one player Australia skipper, Smith. Needless to say, he will lead and have a huge say in the team selection. Royals could go with a clear strategy to build a side around Smith. Royals, in addition, are known put their money on uncapped players and give them full license. Smith would bring in some valuable additions from Australia’s domestic circuit (for instance: DA’rcy Short), whereas also have an knack for Indian stars.

RTM for one overseas slot

What is Right to Match? Under RTM, an IPL franchise can retain three Indian players, two overseas and one uncapped (Indian) player. With Smith already in Royals’ dugout, this leaves them with one overseas player. Who could it be? Faulkner rose to fame with an impressive IPL season for the blue brigade in 2013. In his first season, Faulkner finished at the 84th spot in terms of highest-run scorers. His growth was evident, finishing the following edition on the 40th position. He averaged 45.55 with a strike rate over 190. In the bowling department, Faulkner ended as the second highest wicket-taker (28 scalps) in his debut season.

In the hindsight, Royals may not waste an RTM for any overseas candidate as well.

There are two other interesting candidates for the foreign player-slot, who RR can purchase. Shane Watson or Tim Southee.

Former Royals’ skipper, Shane Watson. Watson was instrumental in leading Royals to their title-win in the inaugural edition. Currently not amidst high stakes, Watson can still be handy. He is involved in ongoing Big Bash League (BBL) 2017-18. Leading Sydney Thunders, Watson has accumulated 309* runs from 9 innings at 38.62.

From Southee’s perspective, he averages a decent 24.87 and strikes with the ball in every 17 deliveries in the shortest format. Nonetheless, he hasn’t played a single T20I in 2017. A bowler with plenty variations up his sleeves, Southee can still be a bonus by all means.

Here is why Royals may have refrained from retaining Rahane. With a base price of INR 2 crores, Rahane can still be retained at a very low cost. Had Royals gone for Rahane in the retention, they would have had to churn out a minimum of INR 7 crores. Smart no?

Other India options – Sanju Samson, Dhawal Kulkarni, Yuvzendra Chahal (That is, if RCB overlook him).

With Royals known to spring a lot of surprises, they may also add new members in form of Aaron Finch, Brendon McCullum, Evin Lewis, Mayank Agarwal etc. In Smith’s presence, expect some handy Australian players in the frame. Lewis West Indies’ T20I star will give them edge in the Powerplay overs. Agarwal, with over 1,000 runs in Ranji Trophy 2017-18, also looks a Royals material and he has good amount of IPL experience as well. 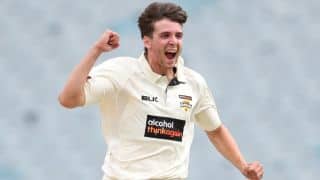