Both Knight Riders and Royals' hopes of making the IPL 2019 playoffs are hanging by a thread.

Kolkata Knight Riders are undergoing a slump. It’s no secret. Despite having a destructive and perhaps, the most in-form batsman currently, in Andre Russell, they have succumbed to four straight defeats, hurting their chances of making the IPL 2019 playoffs.

They are dealing with multiple issues. Their spin trio of Piyush Chawla, Kuldeep Yadav and Sunil Narine hasn’t been able to make an impact. Kuldeep was dropped for their last match against Sunrisers Hyderabad which they lost by nine wickets. Their batting is fragile. Except for Russell, others have been highly inconsistent. Barring their demolition of Rajasthan Royals, three of their four victories have come due to the brilliance of Russell. Had it not been for his explosive batting, they wouldn’t have enjoyed the start early in the season and struggled like RR and Royal Challengers Bangalore.

Russell is also at the centre of a debate where should he bat? He himself admits of his desire to bat higher up the order giving him more time to settle and score runs. Against SRH, he batted at No. 7 which raised question mark over the captaincy of Dinesh Karthik.

Speaking of captaincy, their opponents RR have endured mixed results since implementing a change in that department. Steve Smith has struck consecutive half-centuries since taking over the reins from Ajinkya Rahane in a win and defeat. Rahane’s own form has undergone a turnaround as he struck a century in a six-wicket defeat to Delhi Capitals. They are soon to be hit by IPL exodus with the likes of Ben Stokes, Jos Buttler, Jofra Archer, Steve Smith the top stars to leave for their respective nations for World Cup preparations. Time is running out for them.

Weather: Generally clear with a low of 26 degrees Celsius

They made three changes against SRH hoping for a turnaround. It didn’t work. Rinku Singh (replacing Robin Uthappa) scored 30 off 25 (second highest of the innings) while Yarra Prithviraj (replacing Prasidh Krishna) and KC Cariappa (Kuldeep Yadav) bowled five overs between them for 63 runs and one wicket. With just one of the three making significant contribution, will KKR revert to their tested players? Or give the freshers one more go? In a crunch match, going with the experienced lot makes sense. Team management has some big calls to make.

With three straight first-ball ducks, Ashton Turner’s IPL career is off to a nightmarish start. RR will certainly do well to drop him for the clash and replace him with Liam Livingstone who has played just one match so far this season.

“We ve done it before. We have won 11 in a row… Certainly it s possible and the guys will try hard both off the field and on the field,” KKR coach Jacques Kallis 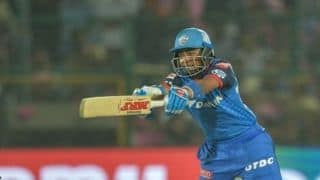