While Russell, who batted at number three, hammered an unbeaten 80 off 40 balls, Gill scored 76 off 45 balls and Lynn scored 54 off 29 balls to give the team fans a treat.

Mumbai Indians (MI) bowlers had a night to forget as Andre Russell, Shubman Gill and Chris Lynn powered Kolkata Knight Riders (KKR) to 232/2 in the 47th match of the Indian Premier League (IPL) 2019 at the Eden Gardens in Kolkata on Sunday.

While Russell, who batted at number three, hammered an unbeaten 80 off 40 balls, Gill scored 76 off 45 balls and Lynn scored 54 off 29 balls to give the team fans a treat.

Such was the onslaught from the three that KKR, who had suffered six defeats in a row, went on to register the highest team total of the 12th edition of tournament, surpassing Sunrisers Hyderabad s (SRH) 231-run total against the Virat Kohli-led Royal Challengers Bangalore (RCB).

KKR set the ball rolling from the first ball and offered no respite to the likes of Jasprit Bumrah, Lasith Malinga, Hardik Pandya, Krunal Pandya and Rahul Chahar, hitting 21 fours and 15 sixes, scoring as many as 174 runs in the fours and sixes. The opening duo of Lynn and Gill put on a 96-run partnership in 57 balls, Russell and Gill added 62 runs together in just 35 balls. (ALSO READ: Russell, Gill, Lynn power Kolkata Knight Riders to 232/2 against Mumbai Indians)

Delhi Capitals (DC), who had earlier in the day beaten RCB to make it to the playoffs, occupy the fourth spot in the list with their 213-run total against MI. While RCB are on the fifth spot in the list, having scored 213, on the back of Kohli s hundred, against KKR. 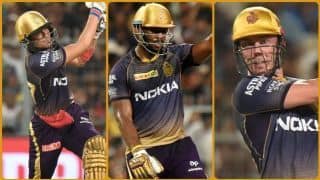