How much did the no-ball to reprieve Russell cost? How good was Narine upfront?

Fuelled by an excellent all-round performance from Andre Russell, hosts Kolkata on Wednesday made it two wins in a row with a 28-run victory over Punjab at Eden Gardens.

Here are the major reasons for Kolkata’s victory:

Russell had made three runs from five balls when Mohammed Shami changed his angle, ran in and nailed an accurate yorker that scooted under the batsman’s bat and into the stumps. Russell, his head fallen, turned and began slowly walking back to the pavilion while the Eden Gardens fans watched stunned. Shami celebrated, but his happiness was short-lived. (VIDEO: All-round Russell seals second straight win for Kolkata)

The umpire Anil Chaudhary had an arm outstretched to signal a no-ball, and then twirled his hand to signal a free hit. Shami looked dazed, David Miller next to his had a complexed look on his face. R Ashwin, Punjab’s captain, ran up and questioned Chaudhary, to be told that he had only kept three fielders inside the ring.

Ashwin, incensed at his sloppy captaincy, vented his frustration and walked off. But that was just the start of the pain.

Given a life, Russell hit eight successive boundaries in a stunning display of power hitting to end on 48 off 17 balls. Of those, 45 came after he had been given a life.

Narine returns to open, and does his job

Sunil Narine, ever since he was promoted to open for Kolkata a couple seasons ago, has been a big hit upfront. Even when he’s only scored 20s and 30s, they’ve come at a a fantastic strike-rate which is what you really want an opener to do inside the Powerplay. Back against the team versus whom he scored his highest IPL score – 75 – in 2018, Narine wasted no time in getting going. (READ: Kolkata power to second victory with 28-run win over Punjab)

Facing the mystery spinner Varun Chakravarthy, whom Punjab had forked out a whopping Rs 8.4 crore for at the auction, Narine swung the rookie with glee in a 25-run over – the most expensive by a bowler on his IPL debut. Narine got on strike for the second ball of Chakravarthy’s over and hit him for two sixes and two fours.

Narine made just 24, but it came off nine balls at a strike-rate of 266 and pushed Kolkata to 36 in the fourth over.

Nitish Rana was sent back into the middle order after opening the innings against Hyderabad and getting 68.After nine overs, he was 13 from 15 balls. After the tenth, he had moved to 21 from 18. At the end of the 11th, he was 22 from 21 balls.

Then, sensing an opportunity, Rana backed himself and lofted Ashwin for two sixes in the 12th over. Two more off Mandeep Singh followed, before the big over came. Hardus Viljoen was hit for 20 in the 14th over, with Rana getting to his half-century in 28 balls with a four first ball.

The left-hander fell moments later for 63 off 34 ball, a very handy innings that allowed Robin Uthappa and Russell to cash in.

Dinesh Karthik made a tactical decision when Punjab came out to bat and it proved a smart one. Instead of using one of his three spinners in the Powerplay, as he most often has done at Eden Gardens, Karthik used only pace in the first six overs.

The result was that Lockie Ferguson got KL Rahul and Russell prised out Chris Gayle inside five overs, and Punjab had lost their best two batsmen.

The move was taken with sound logic, because Rahul and Gayle have scored freely against Narine and Piyush Chawla. 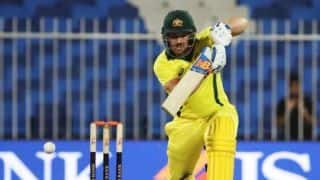