Central to both of SRH's win last week was their wicketkeeper batsman, Jonny Bairstow, who with two fifties is our IPL Player of the Week.

After three losses in a row, last year’s runners-up Sunrisers Hyderabad last week won both their matches to move to fourth place on the IPL 2019 points table. Central to both wins was their wicketkeeper batsman, Jonny Bairstow, who with two fifties is our IPL Player of the Week.

In his maiden IPL season, Bairstow has not put a foot wrong. With 445 runs in nine matches at a stunning average of 63.57, the England wicketkeeper has been instrumental in Sunrisers success this season. Bairstow already lit up the IPL with his scintillating century against the Royal Challengers Bangalore, and played another couple more impactful knocks, which resulted in Sunrisers put their campaign back on track.

There was a time when Sunrisers were in the top three at the points table, but a hat-trick of losses to Mumbai Indians, Kings XI Punjab and Delhi Capitals put their campaign in jeopardy which resulted in them slipping below. However, with recent consecutive wins against Chennai Super Kings and Kolkata Knight Riders, Sunrisers have slowly climbed back to take the No, 4 spot on the leaderboard, and leading from the centre from both games was Bairstow, whose assault at the top and the ability to finish off both games takes the cake.

Against CSK, courtesy David Warner s stunning assault, Bairstow was kept quiet. And as SRH raced to 68 runs inside the Powerplay, Bairstow had only faced nine balls till then. Chasing 133 to win, Warner bludgeoned a 24-ball fifty and by the time he departed, the asking rate was brought down to less than five runs per over.

However, Imran Tahir triggered a small comeback for CSK by grabbing the wickets of Kane Williamson and Vijay Shankar cheaply. So after watchfully playing out Tahir, Bairstow took the rest of the bowlers on. Karn Sharma was taken for a couple of sixes in his first over, and later a third as Bairstow finished the game in the 17th overs, offering a boost to SRH s run-rate.

Then, on Sunday against KKR, Bairstow was brutal in his approach. He forged a fourth century-plus stand of the season with Warner, bringing up the 100 in the ninth over. Bairstow made most of his lifelines he was dropped three times and once again finished the job for the Sunrisers. In the second over, Bairstow was spilled by debutant KC Cariappa at deep point after he had uppishly cut Yarra Prithviraj another player making his IPL debut and later by Harry Gurney and Piyush Chawla on 55 and 58 respectively.

Bairstow then decided not to waste time and finished the game in the 15th over, smoking Chawla for 16 off three deliveries to finish the game. In his last home game of the season, Bairstow had exited with a bang. 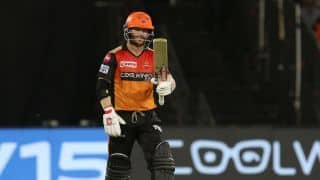