Kane Williamson scored his maiden half-century but Shimron Hetmyer and Gurkeerat Mann ensured RCB went out with a win.

The Royal Challengers Bangalore finished their IPL 2019 campaign with a four-wicket win over Sunrisers Hyderabad on Saturday to make the equation tougher for Kane Williamson and his side. Help came from a couple of unexpected names – Shimron Hetmyer and Gurkeerat Mann, as the two batsmen forged a game-changing partnership which sent RCB out with a bang. We analyse a few passages of the game which led to the outcome.

Erratic RCB let SRH get away

In the first 15 minutes of the match, RCB were pretty much all over the place. There was a dropped catch from Yuzvendra Chahal, an overthrow conceded by Kulwant Khejroliya and Umesh Yadav was dished out a forgettable treatment by Martin Guptill and Wriddhiman Saha. Guptill found his rhythm, and Saha, who was dropped on five, stuck a hat-trick of boundaries off Chahal as Sunrisers were off to a fantastic start of 44 without loss after four overs. Three balls later, however, Saha was dismissed, and except one batsman, Sunrisers middle order was subject to yet another struggle

That one batsman was Sunrisers skipper Williamson, who, after a series of ordinary scores, finally struck form with a composed 70 off 43 balls. Williamson batted like a million bucks, initially milking the balk away for singles to forge a 45-run stand with Vijay Shankar, who contributed with 27. But as the rest of the batsmen found it tough to get going, Williamson switches gears effectively in the death. In the 16th over, Sunrisers were 127 for 5, but Williamson s late assault ensured the team reached a reasonable total. Umesh was taken for 6,4,6,4 and 2 (nb) in the last over, lifting the score to 175.

It may be baffling but Saturday night s game was Washington Sundar s just third of the season. He wasn t unfit, and neither were the conditions unfavourable for him. Hence, it might remain a mystery why Kohli held him back so long. None the less, Sunday seized the most of his chance against Sunrisers, he began emphatically. Second ball of his spell, Sunday had Guptill chipping a flatter delivery to short mid-wicket. Three balls later, Manish Pandey perished by pulling to Hetmyer. The came the crucial wicket of Shankar, who was beginning to look threatening after putting an important partnership with Williamson. Sunday came around the wicket to which Shankar played the slog sweep but found the fielder at short fine leg.

After quite some time, RCB s batting found themselves in a bit of a quandary. After the horror of the first six games, that RCB s campaign fell slightly back on track was courtesy three guys Virat Kohli, his opening partner Parthiv Patel and the charismatic AB de Villiers. On Saturday though, all three were gone, with the score reading 20 for 3. Bhuvneshwar Kumar had Parthiv top edging for a duck, before Khaleel had Kohli and de Villiers out caught behind. Kohli s wicket was key here as the RCB skipper was looking is brilliant nick, having drilled a boundary down the ground and lofted Khaleel over his head into the stands. But it was the sheer determination of the young left-arm pacer that he eventually got his India skipper out caught behind and took out de Villiers in an almost similar manner.

Shimron Hetmyer came into the IPL with a reputation to protect. Considered the next big thing in West Indies cricket, Hetmyer made headlines during West Indies otherwise abysmal tour of India last year. But an underwhelming start to the IPL, which saw him score 0, 5, 9 and 1. He was unlikely to feature in another game but that Kohli stuck with him and Hetmyer rewarded his captain s decision turned out to be an ace of a move for RCB. Portraying a whole new player, Hetmyer disdainfully hammered four fours and six sixes during his knock of 74 off 47 balls, four off which came off Rashid Khan, perhaps the toughest bowler to hit sixes of. Hetmyer brought up his half-century off 31 balls, supported marvellously by Gurkeerat Mann, who struck a half-century himself. Although his was a more supportive role, Mann ensured RCB had the required run-rate in check and stitched a massive 144-run partnership. Both batsmen eventually departed but had made the way smooth for the next batsmen to see RCB through. 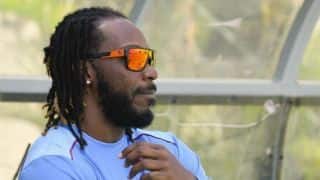 Cricket News Live: Archer on his World Cup chances, Gayle back to Tallawahs