IPL 9: 11 cricketers who will be dearly missed

IPL 9: 11 cricketers who will be dearly missed

As the ninth edition of the IPL is ready to rock and roll, Suraj Choudhari pens down 10 such names which will be dearly missed in the IPL due to retirement, injury or being unsold at the auctions.

India s grandest stage of T20 cricket Indian Premier League (IPL) is all set the kick-start on April 9 after a month long T20 World Cup 2016. The fans will be desperately waiting to witness the high voltage clash of the titans where teammates turn into rivals and vice versa. IPL has become an ideal platform for the budding talents to showcase their talent and sculpt a spot in their respective national sides. We have seen the likes of Hardik Pandya and Jasprit Bumrah rise in the ranks. It is also widely reckoned to exhibit iconic players who are no longer a part of the side. As the ninth edition of the IPL is ready to rock and roll, Suraj Choudhari pens down 10 such names which will be dearly missed in the IPL due to retirement, injury or being unsold at the auctions. FULL CRICKET SCORECARD: Mumbai Indians vs Rising Pune Supergiants, IPL 2016, Match 1 at Mumbai

1. Virender Sehwag: The maverick opening batsman is one of the superstars in the Indian cricket circuit. He enjoys massive fan following and fans just love him to watch in action on the cricket field. Sehwag has redefined batting with his unique style and his absence will certainly hurt his fans across the globe. Sehwag will miss out from the league as he has called it a day from all forms of international cricket and IPL. He has a fantastic record in the IPL; in 104 matches Sehwag has amassed 2728 runs at a modest average of 27.55 and a staggering strike rate 155.44. The manic right handed batsman recently featured in the Masters Champion League (MCL) and enjoyed a prolific run in the tournament and led his side successfully to the title. He is definitely the biggest name to miss out in the coveted tournament. READ: IPL 2016 Schedule, Time Table, Fixture PDF Download

2. Martin Guptill: Guptill surprisingly remained unsold in this year s auction and his current form is a slap on the face of team owner. Guptill is inarguably one of the best limited overs batsmen in contemporary cricket and his current form is just captivating. He was seen in good touch in the recently wrapped up World T20 and his approach has been nerve wracking. He scored a scintillating double century in the 2015 World Cup and IPL franchises has definitely missed out on a big name as the elegant right-handed batsman remained unsold in the auctions.

3. Pragyan Ojha: The wily left-arm orthodox spinner was the Purple Cap holder for clinching the most number of wickets in the third edition of the IPL in 2010. Ojha has a good record in the tournament as in 92 games he has chipped 89 wickets at a good economy rate of 7.36 and an average of 26.20. He was a part of the MI set-up last year but did not manage to fetch any buyer this season.

4. Kumar Sangakkara: The elegant Sri Lankan southpaw was amongst the noted retirements in 2015. He is one of the greats to have played the gentlemen s game. His elegant style of play has earned him accolades across the globe. He was in tremendous form in the 2015 World Cup as he fired four back-to-back centuries in the tournament. He also featured in the MCL for Gemini Arabian and signed off the tournament as their highest run-scorer. He has been raking up runs all around the world in domestic leagues and the amount of experience he carries on his shoulders is huge. Sangakkara is a crowd puller and IPL will just be poorer without him.

5. Mike Hussey: Australia s Mr.Cricket has been a consistent performer in all formats. Hussey played a key role for his side Sydney Thunders in the Big Bash League in 2015-16. He was the skipper of the side and led his team successfully to the title. Hussey carries a reputation of being a big match player. He had a prolific run in the Big Bash League (BBL) and averaged 43.71 in nine outings. His humble attitude and ability to stick to the grounds during crisis will be missing in the IPL. A mainstay for Chennai Super Kings (CSK) for many years, IPL will miss the Australian great. 6. Usman Khawaja: The rise of Khawaja has been irresistible. If you thought that his classical approach suited the longer format more, it was in Big Bash League, his enticing form made the difference for his side. He played with same buoyancy in the World T20. Many fans hoped his inclusion in the IPL but it wasn t to be as he was one of the unlucky players who remained unsold at the auctions.

7. George Bailey: The smiling assassin from Australia won billions of hearts with his playful character and ever-smiling nature. He led his side Kings XI Punjab side in the previous season but failed to attract any buyer in this auction. Bailey led KXIP to the runners-up position in 2014 and is loved by Indian fans for his amazing display of sportsmanship and leadership qualities; apart from this his prowess with the bat is also well spoken.

8. Mitchell Starc: Australia s frontline bowler Mitchell Starc is inarguably the best customer in the game. His ability to bowl deadly yorkers on a regular basis is what enthrals the fans but unfortunately the lanky left-arm pacer has been ruled out of the tournament due to an injury and will not be a part of Royal Challengers Bangalore (RCB). Starc is a well polished bowler and his presence indubitably increases the level of competition in any game.

9. Marlon Samuels: You ought to be special when you win two World Cup finals for your side in this format. West Indies T20 World Cup hero Marlon Samuels has once again shot to limelight with his match-winning knock of an unbeaten 85 in the finals against England. Samuels proved the fact that he is a big match player and likes immense pressure. He bailed his team out of crisis and carried it over the line along with Carlos Brathwaite. He is the talk of the town and Indian fans will miss the happy-go-lucky Jamaican in this tournament.

10. Manoj Tiwary: Tiwary has been unlucky not to make the cut as he s been a productive cricketer in the domestic circuit. He is widely remembered for his final over heroics in the 2012 edition of the IPL where he smashed two boundaries to Dwayne Bravo to see his side lifting the coveted trophy for the first time in their cricketing chronicle. Tiwary, once touted to be the next big thing of Indian cricket, is among the list of unsold players. His base price was INR 1 crore.

11. Darren Sammy: Cricket s most whimsical and playful cricketer Darren Sammy is known for his shenanigans on the field. He carries a big smile on his face irrespective of how tensed the situation is. He is a great leader, which he famously displayed in the recently concluded ICC World T20 where West Indies lifted the title for second time under his captaincy. Sammy remained unsold during the auctions and fans will undoubtedly miss his champion dance and big hitting with the bat. 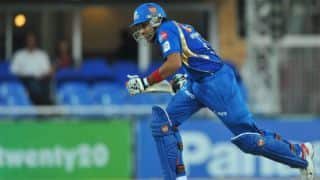 IPL 2016: Should Rohit Sharma open for Mumbai Indians in IPL 9?

Will shifting IPL out of Maharashtra solve the state's drought issue? This guy has an answer!