Despite the fandom and glitz around RCB, they have been underachievers and IPL 2018 auctions gives them a chance to look beyond the plush and opt for utility, strengthening their bowling and wicketkeeping.

Virat Kohli and AB de Villiers were expected retentions for Royal Challengers Bangalore (RCB) ahead of IPL Auction 2018. Retaining Sarfraz Khan raised a few eyebrows. He played just 5 matches in the 2016 edition and an injury prevented him playing the 2017 edition. However, RCB s decision to back Sarfraz transports us to a decade back: in 2008, they had invested in a teenaged Kohli, picking him as an under-19 cricketer, and now have pocketed rich dividends.

Despite the fandom and glitz around RCB, they have been underachievers. They have lost three finals (2009, 2011 and 2016), and finished last in 2017. Very few teams have managed to match RCB s star power. This auction gives them a chance to look beyond the plush and opt for utility, strengthening their bowling and wicketkeeping.

Analysing their shortcomings over the years, it is their bowling that has let them down and therefore it was quite a surprise to see them not retain Yuzvendra Chahal, their most successful spin bowler till date.

Note: Chahal has 70 wickets for RCB from 55 games at 21.92, and an economy rate of 7.89. Only Vinay Kumar with 80 wickets has been more successful than Chahal for RCB.

“I am not thinking too much as to what happened in the retention. I trust RCB. They still have the Right-To-Match card so I am 100 per cent sure I am coming back to RCB. However, it also depends on how it will go at the auction,” Chahal told New Indian Express.

Chahal remains the top contender for RTM. The other option can be Kedar Jadhav or KL Rahul. It depends on where the focus lies. Rahul, a local boy, is more valuable as an opener. Jadhav can don the finisher s role. Both can keep wickets while Jadhav gives the extra option with his off-spin.

Considering Kohli opens for RCB, will he want someone who likes to bat through or an explosive option that Chris Gayle has given them over the years? The chances are more likely for the latter.

With the Bengaluru wicket slowing down considerably since the re-laid turf and Kohli s fondness for wrist spin, RCB can well use the RTM for Samuel Badree, the ranked sixth T20I bowler.

End of the Gayle run, who next?

IPL Auctions 2011. Kolkata Knight Riders (KKR) had decided against retaining Gayle. Gayle was not picked in the auction and only played in the tournament as replacement of an injured Dirk Nannes.

The record looked more formidable till 2015. He was averaging close to 50 for RCB with a strike rate soaring over 157. 2016 was disappointing by his standards, and Kohli did not hesitate to drop him, 2017 was a step lower. He managed 200 runs from 9 games at 22.22. The strike rate fell to 123. Though he has bludgeoned at will in CPL and BPL, he has not been the Gayle force in West Indies colours either.

At 38, Gayle isn t getting any younger and with Kohli s focus on fitness and agile cricketers, the RCB door seem shut for now.

That brings us to the question: Who next?

Chris Lynn sounds a viable option. RCB have been victims of Lynnsanity in the past. He scored 295 runs at 49.16 and a strike rate of 181 for KKR last season. KKR have not retained him and there lies an opportunity for RCB. In the ongoing BBL, Lynn has blasted 309 runs at 154.5 with the strike rate reading 177.6!

Karun Nair, who scored a 51-ball hundred in the ongoing Syed Mushtaq Ali Trophy, has expressed desire to play for his home city, Bengaluru. Alongside AB, Sarfraz and Jadhav, Nair can make a good middle order.

RCB emptied their pockets with a whopping INR 14 crores for Yuvraj Singh in 2014. They wanted him in 2015 as well but were outbid by Delhi Daredevils. Kohli has left no stones unturned to revive Yuvraj s career. It might be the case here as well. Yuvraj scored 252 runs at 28 at a strike rate of 142 for Sunrisers Hyderabad last season.

Note: Lynn and McCullum are both priced at INR 2 crores while Nair is at INR 50 lakhs.

Once upon a time, Mark Boucher used to keep wickets for RCB. Vishnu Vinod, Rahul, Jadhav have all kept wickets for RCB in recent times. AB is a superior wicketkeeper than any of them but he is reluctant for the role especially with his history of injuries. This is an area they have struggled in the last two seasons following the Dinesh Karthik era. The best bet for them will be to bring in an explosive wicketkeeper-batsman at the top.

RCB can eye either of Quinton de Kock and Jos Buttler. QdK is an explosive opener, while Buttler has done more than a decent job at the top for Mumbai Indians.

The other option is to go for someone like Sanju Samson or pick Ishan Kishan and groom him.

Expect RCB to empty pockets on Ben Stokes. Stokes can fit into the Shane Watson role. Here is the option of an explosive batter in the middle-order, a death bowler, an exceptional fielder and someone who fits into the RCB megastar template.

RCB surely have Mitchell Starc in mind. Mustafizur Rahman or Chris Woakes can be smart picks too.

Adding either of Mohammed Shami or Umesh Yadav to the kitty will be smart. To build on to the Indian bowler resource, they can target locals like Abhimanyu Mithun, Sreenath Aravind or Vinay Kumar, men who have already represented RCB before. They can also invest in Under-19 stars such as Avesh Khan (from 2016 edition), Kamlesh Nagarkoti or Shivam Mavi.

If RCB wish to move on from Badree, the other spinner they could target is Nathan Lyon. Yes, the same man who decapitated Indian batting at Bengaluru in March 2017. Lyon has been phenomenal in BBL and no reason why he can t form a formidable pair with Chahal.

The IPL 2018 auction is RCB s best chance to tighten the screws and fix their perennial bowling and keeping woes. 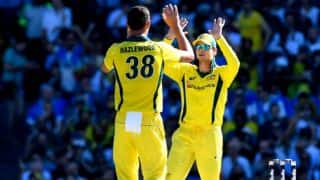