The Indian Premier League (IPL) is here. And once more it is time to set aside national loyalties and pick a city-based franchise to cheer this season. 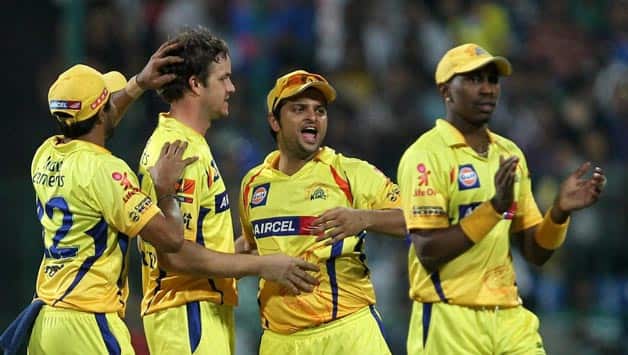 The Indian Premier League (IPL) is here. And once more it is time to set aside national loyalties and pick a city-based franchise to cheer this season. As a loyal Chennai Super Kings (CSK) fan ever since the league’s inception, I will be egging on Dhoni’s men to shrug off last season’s heart-breaking loss in the final and come up trumps this time to claim the championship for the third time in six seasons.

Here, in no particular order, are my top five moments as a CSK fan over the years:

In the context of the game, the hat-trick may not have mattered much; three wickets remained and the batsmen were going for their shots anyway. Still, to see a Lakshmipathy Balaji (a local lad and one of my favorites) pick the first hat-trick was a sure sign of things to come. For CSK to do well, the local players had to step up — and how they did!

CSK’s strength is the quality of big-hitter batsmen in their side. Over the years, they have had Matthew Hayden, Andrew Flintoff, MS Dhoni, Suresh Raina, Albie Morkel and Dwayne Bravo — all players who could step in to top gear at a moment’s notice. While these players were largely known quantities, one player who chose the IPL to announce himself to the world in grand style was Murali Vijay.

Think Dharamsala and you would associate it with serenity and beauty; but in one night, the usually calm and collected MS Dhoni exploded to viscerally demolish Irfan Pathan in the final over of the game to give CSK a much-needed win. The team was having an average run up to that point, but when Dhoni punched his helmet to celebrate the victory, it signaled the onset of a turn-around in fortunes.

CSK were cruising to their first IPL title in the final when big Kieron Pollard walked in. Mumbai Indians (MI) had made a strategic error by sending Pollard in too late, but it didn’t seem to matter as the ‘other KP’ smashed 22 runs off a Doug Bollinger over to raise MI hopes of a last-minute heist. This is where the calm and calculating Dhoni sealed the game, as he positioned CSK’s own big man Matthew Hayden at a straightish mid-off and waited for Pollard to hit one straight to the fielder. He duly obliged in the final ball of the penultimate over as CSK sealed the game in their favor.

5. Albie Morkel plunders 28 in one over of Kohli (vs Royal Challengers Bangalore in 2012)

This was one of the highlights of IPL 2012 and it will not be easily forgotten by those who were following the match. CSK needed 43 runs to win from 12 balls when Dhoni got out. In came Albie Morkel with a clear set of instructions: hit the ball as hard as you can. As luck would have it for the Men in Yellow, he had to tee off against Virat Kohli, not really the bowler you would want to throw up against a fearsome hitter of the ball. What followed was carnage, as 28 runs came off the penultimate over, and CSK stole an improbable victory off the last ball of the game. In a season which ultimately ended in disappointment for the team, Albie Morkel’s assault was one of the bright spots to cherish.

Another season, another opportunity for the Super Kings to shine. What do they have in store this year?