On April 15, 2011, Sachin Tendulkar smashed his first T20 hundred during an Indian Premier League (IPL) encounter between the Mumbai Indians and the Kochi Tuskers Kerala. Some suggested that the youngest format wasn’t his cup of tea, but a scintillating performance in the IPL 2010 had silenced them into submission. The hundred showed that he was willing to conquer new territories. 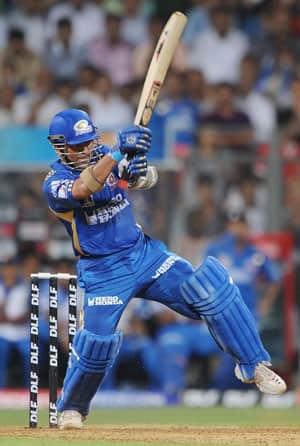 Sachin Tendulkar essayed a helicopter shot that sped across wide-long on for four. The left foot was off the ground as the bat turned in his hands and the ball raced away like a bullet. © AFP

On April 15, 2011, Sachin Tendulkar smashed his first T20 hundred during an Indian Premier League (IPL) encounter between the Mumbai Indians and the Kochi Tuskers Kerala. Some suggested that the youngest format wasn’t his cup of tea, but a scintillating performance in the IPL 2010 had silenced them into submission. The hundred showed that he was willing to conquer new territories.

The IPL 2011 was played under the shadow of India’s triumph at the 2011 World Cup. There was a celebratory buzz around the country and as the fans soaked in India’s epic victory. The World Cup hangover was inescapable all over the country. For Tendulkar, the World Cup triumph was dream come true, his personal form on the world stage was magnificent and he came into the IPL on those twin highs.

Tendulkar walked in to open the batting with the South African Davy Jacobs. An enthusiastic Wankhede crowd welcomed their hero as he strode out to the centre. There was a scare in the first over as Tendulkar tried to sneak a leg-bye, but was sent back. Replays showed that a direct hit would have had him in trouble. However, all the nerves eased when he essayed a trademark straight drive that beat the fielders to the boundary. Such was the class that the commentator remarked, “That is just Rolls Royce cricket.”

Jacobs struggled to get on with things at the other end even as Tendulkar was in control. He punished anything short outside the off-stump and also used his deft touch to guide a few boundaries. Vinay Kumar bore the brunt of Tendulkar’s class, but the legend was fortunate to have survived leg-before shout early on. One could see that it was Tendulkar’s day as Parthiv Patel couldn’t hold on to an edge as it flew past him and went for a four.

With Jacobs going slow, it was Tendulkar who played the aggressor. Gomez then shattered Jacob’s woodwork in the ninth over with Mumbai on 61. Ambati Rayudu joined Tendulkar in the centre and they were a bit cautious in the overs that followed. However, Rayudu shifted gears and that allowed Tendulkar to take a backseat. While Rayudu attacked the bowling, Tendulkar was happy to rotate the strike and hit the occasional boundaries.

Tendulkar got to his fifty in the 14th over with a flick through square-leg off Jadeja. It had taken him 43 balls to get to the milestone as he slowed down a touch after the initial outburst. Seeing Rayudu smashing the bowlers to all parts, Tendulkar decided it was time in the 16th over. Vinay Kumar was at the receiving end yet again as Tendulkar moved across the crease and guided a shortish delivery into the stands at fine-leg. He then bludgeoned another maximum over long-on and a four to make it 20 off the over.

The next two overs were relatively quiet as Jadeja and RP Singh kept things tight. At the start of the 18th over, Mumbai were solidly placed at 157 for one. Tendulkar was on 77 off 57 balls and not many had thought a hundred was possible. That was to change in that over as Perera ran in.

The shot that would stand out in memory came off the third ball of that over. Taking a cue from his India team-mate Mahendra Singh Dhoni, Tendulkar essayed a helicopter shot that sped across wide-long on for four. The left foot was off the ground as the bat turned in his hands and the ball raced away like a bullet. The world watched in awe as this senior pro emulated an idiosyncratic innovation made popular by the Indian captain.

Moving about the crease, Tendulkar was trying to disturb the bowler’s rhythm, but managed to maintain his balance. As he moved to cover his stumps, Perera bowled it a little wide only to see Tendulkar smash it over long-off for a huge six. At the dawn of the final over, Tendulkar was on 90 and three figures looked very possible now. The master had shown that even after years of breaking records and setting milestones, his thirst for conquering unscaled peaks remained © AFP

Poor Vinay Kumar was summoned to bowl the final over with Tendulkar in the mood to get to his milestone. Tendulkar guided the third ball through fine-leg for a four to move to 94. The Wankhede was now buzzing in anticipation. The fourth ball was hit back past the bowler and the batsmen sprinted across the wicket. Sensing the occasion, Rayudu called for two to allow Tendulkar to take strike, but was run-out at the bowling end.

With two balls to go, Tendulkar needed five runs and suspense gripped the ground. The crowds almost didn’t notice Kieron Pollard walking to join the legend at the wicket. Tendulkar knew it was a unique opportunity and hit the fifth ball through long-on for four and took his score to 99. The fielders were mere spectators and were diving around in vain. The master was bisecting the gaps perfectly.

When Tendulkar bats in the 90s, the nation comes to a standstill. While this may not have been for India, everyone wanted him to get to the three figure mark. As Vinay Kumar ran in to bowl the final ball, there was tension. Tendulkar merely pushed it to long-off for an easy single and walked off to a rousing reception from his home crowd. The master had shown that even after years of breaking records and setting milestones, his thirst for conquering unscaled peaks remained.

However, Kochi stole Tendulkar’s thunder as they overhauled a target of 183 in the penultimate over of the game. Brendon McCullum and Jayawardene’s opening partnership set the tone for the innings and they dominated throughout the run-chase. In the end, Kochi sealed an eight-wicket victory as Mumbai rued the fact that they couldn’t celebrate Tendulkar’s milestone with a win.