After suffering a humiliating defeat in the first ODI, Ireland have a big task ahead of them as they have to mnake amends from the opener and bounce back to make the 2 match series 1-1

Pakistan have had a terrific tour of England, so far, as they drew the four-Test series against the hosts before moving to Ireland to dominate them, winning in the first One-Day International (ODI) by 255 runs. Pakistan did not put a foot wrong in the series opener versus the team who has defeated them in the ICC World Cup 2007, and ran over them easily. The visitors cannot afford to get complacent as they have a tough five-ODI series against England before signing off from their tour of Europe. Ireland, on the other hand, have an uphill task ahead in they have any chance of a comeback. FULL CRICKET SCORECARD Pakistan vs Ireland, Live Score, 2nd ODI match

In the first ODI, Ireland won the toss and elected to bowl. Their bowlers had a poor show in the series against Sri Lanka and the script remained the same for them, in fact, it got worse for them. Their bowlers did not bowl wicket taking deliveries and sprayed the ball in all corners of the pitch, with Sharjeel Khan making a mockery of them to set an imposing target of 338 runs. Ireland also looked spineless with their batting managing only  82 runs.

Top Order: Paul Stirling should open the innings alongside Ed Joyce again. Both of them got out cheaply with the aforementioned player not even opening his account. Next to walk-in should be captain William Porterfield.The Ireland top order has a big task as they have to face Pakistani pace attack comprising of  Mohammad Aamer and Umar Gul. So it is very necessary that the opening pair be calm in the first few overs and not try risking their wicket.

Middle-Order:  Ireland’s middle order will mostly comprise of Kevin O’Brien and Niall O’Brien. Again these two also failed big time against Pakistan’s bowling. After loosing top 3 batsmen one after the other, it was quite obvious for these two to take the responsibility on their shoulders. But they couldn’t get going at all, so it will be necessary that the understand their roles. Gary Wilson should be the next to come in and his selection should be obvious choice. He remained the top scorer for Ireland in the first ODI with 21 runs. Next should be Stuart Poynter to walk-in. Poynter also succumbed quickly but he has a decent record behind the stumps so it is very unlikely that he would be kept out of starting XI.

Lower Order and Bowling: Tim Murtagh will be sure name in the starting XI. He was the most economical bowler for Ireland as the fast bowler finished with 38 for 1 in 10 overs. Except for Murtagh every other bowler ended up with more then 6 RPO. Peter Chase might be replaced with Craig Young as Chase was pelted for 70 runs in his 7 overs. So there is high possibility for Young coming in for Chase. Barry McCarthy was one other influential bowler for Ireland as he took 4 wickets in the match, but he will have to work on keeping his line and length tight as he finished with figures of 4 for 62 in 10 overs. Andy McBrine will be another how will be most likely to play. McBrine leaked runs in the first ODI, but again he will have to learn from their past mistakes. 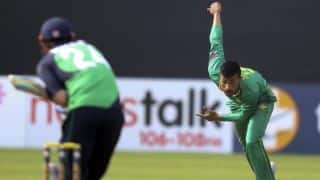