Much of Kumar Sangakkara’s cricketing life has been an argument, where like a lawyer he has had to defend his own case.

Much of Kumar Sangakkara’s cricketing life has been an argument, where like a lawyer he has had to defend his own case. Be it when he made his debut replacing the crowd favourite Romesh Kaluwitharana, or while keeping his place in Sri Lanka’s limited-overs side for three years without scoring a century. He has defended himself with as much élan, grace and poise with which he masterfully strokes the ball through covers — like a crisp, neat and sophisticated gentleman. [Also Read: Kumar Sangakkara and Sachin Tendulkar: How they compare]

More importantly, rarely did he fail to mesmerise spectators with the quintessential elegance of a left-hander. In an age of heavy bats and muscular men, Sangakkara avenged his cause for runs with sublime artistry, turning the bat into a paint brush, caressing the ball through gaps and reforming the game of cricket into a Michelangelo art. He rarely decimated the opposition; he instead charmed them into believing that everything is alright while the scoreboard moved at a good pace. [Also Read: 15 memorable quotes by Kumar Sangakkara]

Through the process, he has had to emerge out of the shadows of his teammates. First it was Sanath Jayasuriya, then his best friend Mahela Jayawardene, and eventually his own idol Arvinda de Silva to stake the claim of being island nation’s greatest batsman ever. The adulation didn’t come easily. In fact, despite being considered an important cog of Sri Lanka’s most successful years, he hogged the limelight only in the last couple of years of his career. Till then, he avenged his cause for runs under the shadows of someone else’s heroics.

But his fight didn’t end there. He asked the cricket world whether he was the best left-hander they had seen. Is he better than the likes of Neil Harvey, Sir Garry Sobers, Graeme Pollock, Brian Lara and Mathew Hayden? He validated his argument with a pile of statistics. And statistically, he beats them all. Not only does he boast of an average far superior to them in conditions away from home, but also scores at an average of over 67 in the 85 Tests he has played without donning the wicketkeeper’s gloves. [Also Read: Despite the hullabaloo, Kumar Sangakkara stays focused on the job]
It also raises arguments as to whether the Sri Lankan is the greatest batsmen of the 21st century. Again, all it took was a bat to score runs and a statistical tool to aid the argument. In terms of innings taken, he was the fastest to reach 7,000, 8,000, 9,000, 10,000, 11,000 and 12,000 runs in Tests. He has scored more than 1,000 runs and 100 boundaries than the second best in this millennium. [Also Read: Legend Kumar Sangakkara receives Guard of Honour in his last Test in Colombo]
Is the greatest left-hander ever? Is he the greatest batsman of the 21st century? Is he the greatest wicketkeeper-batsman ever? You can all pass it of as a yes, with or without a proceeding ‘arguably’.
Today, there isn’t much to argue. The verdict is already out on his career. The final shot attempted in the middle will only give him the stamp of a complete career, one that will give the complete data for all-time great’s analysis.
He batted, he kept wickets, he spoke up about the malfunctioning of the Sri Lankan Cricket Board and fought for better salary for younger cricketers among other things. As he walks out for one final time against India in his Test whites as his court dress, piles of runs and records as files and a cricket bat as his tool of expression and argument, Sangakkara’s final defense will be whether he is the greatest Sri Lankan cricketer ever. 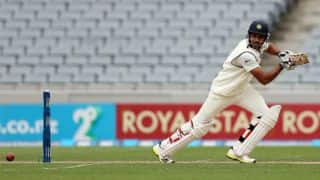