As many as 57% of voters in a Times of India’s opinion poll want Sachin Tendulkar to quit ODIs — a huge percentage considering that the maestro is revered by many as 'God’ in India. In the past few days, Kapil Dev, Sourav Ganguly & EAS Prasanna have also joined the voices against Tendulkar. Are we witnessing an unprecedented wave against the cricketing icon? 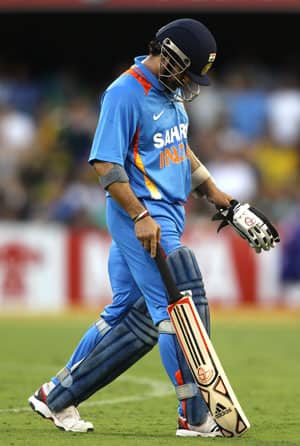 Over the past two decades, the cricketing world has been used to Sachin Tendulkar looking up to the heavens in gratitude after completing yet another hundred. But, sadly, the CB series has seen the great man repeatedly making his way back to the pavilion with head bowed © Getty Images

With every passing day, the number of voices asking Sachin Tendulkar to call it quits from the One-Day Internationals (ODI) has been increasing at a steady pace. If Times of India’s (TOI) opinion poll is anything to go by, then as many as 57 per cent of voters feel that it is time for the maestro to bid adieu to ODIs. Although opinion polls must be taken with a pinch of salt, to see this kind of an unprecedented mood change in India against the man who is considered the ‘God of cricket’ is something that has never been witnessed before.

In the last few days, many eminent cricketers like Kapil Dev, Sourav Ganguly, EAS Prasanna and Kirti Azad have voiced their opinion on this matter. Prasanna felt that people will have a wrong impression of Tendulkar if he continues to fail like this, whereas Azad stressed on the importance of calling it quits at the right moment. “A player should retire when people ask ‘why’ and not ‘why not’. When Sunil Gavaskar retired, I was surprised,” he said.

Kapil Dev felt that there surely was no greater cricketer than Tendulkar, but his decision to retire from the shorter format should have been announced soon after the 2011 World Cup. It came as a surprise that these statements were made by a player who himself had outstayed his welcome chasing Richard Hadlee’s record, but perhaps — and this is just a guess — Kapil has realised the repercussions of getting the timing of retirement wrong and doesn’t want a highly respected cricketer like Tendulkar to go through that pain.

Sourav Ganguly, too, threw his weight behind Kapil’s statements and opined that Tendulkar should reconsider his ODI career. Ganguly’s statements may be inflammatory, but the former captain did make sense when he spoke about Tendulkar’s sporadic appearances in ODIs. This is Tendulkar’s’s first tournament since the 2011 World Cup. He opted out of the West Indies tour and the home series that followed. The fact that Tendulkar selects which tournaments to play and which ones to miss is something that can possibly upset the team’s rhythm. Depending on Tendulkar’s availability, the batting order is subject to change. This does not augur well, especially when you are looking to build a team for the future, with the defence of the 2015 World Cup as the focus. It is important that the younger players acquaint themselves with the position they bat at rather than floating up or down the order; or in some cases — floating in and out of the side like Manoj Tiwary and Ajinkya Rahane.

Tendulkar has nothing left to achieve in ODIs. At the end of the World Cup victory might have been a good time for him to quit this format. His dream had been realised and he had achieved the one thing that eluded him for so long. Almost a year later, it’s a pity that a player of his stature has been made a subject of this unwanted discussion. Agreed, Tendulkar deserves to decide on his own if and when to leave the ODI scene, but had he quit after the World Cup triumph, he would have bowed out with enormous respect.

It’s going to be a humungous task to find a suitable replacement for a player of Tendulkar’s calibre, but it’s time India to learn to stop depending on him, at least in this format. It’s going to require a lot of effort and match exposure for the youngsters to fill those big shoes. There is currently no youngster who can contribute to the team’s cause like Tendulkar in Test cricket, and that’s why there is no call yet for him to be replaced in the game’s longer format. However, there are plenty of youngsters who are capable of performing decently well in ODIs, and they deserve to be given more opportunities, because it’s important to keep the future in mind for the shorter formats. Manoj Tiwary scored a hundred in his last ODI, yet he is made to warm the bench in Australia, still waiting for his first game in the ongoing CB series.

Tendulkar has faced similar challenges in the past and has managed to let his bat do the talking. He may yet come back strongly and silence his critics for the umpteenth time, but what’s most painful is to see him lose the enormous respect he once commanded as the decibel levels of former players and fans clamouring for his retirement are increasing by the day. That we would live to see such a day was almost unthinkable a year ago.