Has Virender Sehwag’s One-Day International (ODI) career come to a close? The 34-year old batsman’s axing from the squad for the England series has put a cloud over his future in one-day cricket as India begin planning for the 2015 World Cup. 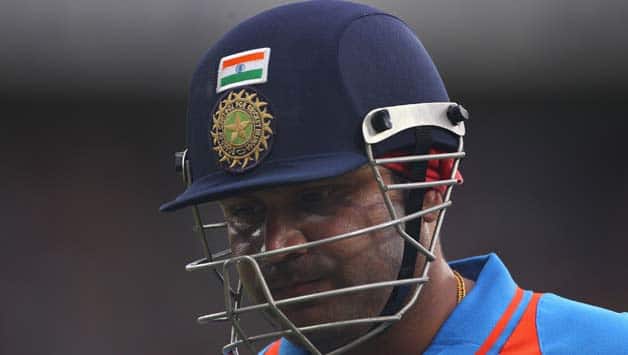 Virender Sehwag is 34-years old and isn t the fittest man on the field. The dashing opener has based his game on a simple yet risky approach © Getty Images

Has Virender Sehwag’s One-Day International (ODI) career come to a close? The 34-year old batsman’s axing from the squad for the England series has put a cloud over his future in one-day cricket as India begin planning for the 2015 World Cup. The hard-hitting batsman’s poor form in ODIs was a huge cause for concern and his reputation couldn’t shield him from the axe any longer. Sehwag has returned to domestic cricket with the intent of making a statement, but is India ready to move on?

The Sachin Tendulkar–Sehwag partnership at the top was one of the most exciting in the history of ODI cricket. Tendulkar mellowed down when compared to his early days, but still managed to score at a fantastic rate. It was Sehwag who took on the mantle of playing the blinders and getting India off to good starts. Since the end of the 2011 World Cup, this partnership has featured in only one series without showing their prolific form of the bygone past.

Tendulkar has now retired from ODIs saying that India must move on and plan for the next World Cup.

Sehwag is 34-years old and isn’t the fittest man on the field. The dashing opener has based his game on a simple yet risky approach. Sehwag doesn’t have the footwork, but makes up for it with impeccable hand-eye co-ordination. However, those key areas slow down as age catches up and Sehwag. Maybe it has with Sehwag, who isn’t known for his fitness. By the time the mega event arrives in 2015, he would be 36. and going by his current fitness levels he doesn’t inspire much confidence. Off late, some of his fielding efforts have also been a letdown.

With two years to go for the tournament, India need to put their plans in place and perhaps the axing of Sehwag is the first step taken by the selectors in that regard. He hasn’t had a good run in ODIs since the 2011 World Cup and he has been struggling to maintain consistency.

Here is his track record in ODIs since India’s memorable triumph at Wankhede:

When compared to Sehwag’s career average of 35.05, the corresponding figure in the table doesn’t look too bad. However, that number has bloated up because of that fantastic 219 Sehwag hit in December 2011. Take that away and he hasn’t scored more than 300 runs in the remaining 14 games.

To get a clearer picture, one must look at his numbers in ODIs since the beginning of 2012. Here they are:

An average of 22.54 isn’t acceptable from a batsman of his calibre. In eleven games, he has scored only one fifty and doesn’t have much to show apart from that. There have been three scores in the thirties, but that doesn’t seem to be enough for him to keep his place in the side. The selectors have taken the long run in perspective and taken the call.

Ajinkya Rahane has been on the bench for time immemorial. The youngster can consider himself unlucky as he has often been treated as a stop gap option without a prolonged run in the side. If India want to get the best out of his talent, he must be given a long rope i.e. a number of games to prove himself and settle into the Indian scheme of things.

Cheteshwar Pujara comes into the squad in place of Sehwag and it wouldn’t be a surprise if he is asked to open the batting sometime in the near future. Gautam Gambhir’s form has been patchy and Pujara might challenge him. He has done the job for Royal Challengers Bangalore during the last Indian Premier League (IPL) and could be a potential candidate for the Indian spot.

Having said that, this isn’t the first time Sehwag has been dropped. In 2007, he was axed from the side, but fought hard to regain his slot. However, he had age on his side then and backed it with big runs. India also have the tendency of falling back on the tried and tested options and if the youngster’s fail, the selectors may recall Sehwag.

All is not over for Sehwag in ODIs, but time is certainly running out for him.