Ishant picked up three for 64. It is not earth-shattering. But it could be a sign that he is breaking the shackles.

Having sent back Hashim Amla and Jacques Kallis off successive deliveries, Ishant Sharma ran in to bowl for a hat-trick. The ball went well outside off, left alone safely by the batsman — AB de Villiers. The lanky bowler appeared disappointed. But given the way his recent past has been, he would take this any day.

A four-ball duck, 18 overs, three wickets and a warning for running onto the danger area — Thursday was nothing short of a swinging day for Sharma. But it is nothing compared to the roller-coaster that his career has been off late. The days when he was a bad dream for Ricky Ponting are long over.

Owing to a string of prolonged bad shows, Sharma had been reduced to a Facebook joke, a pun intended on the Twitter. However, on the second day of the first Test against South Aftrica at the Wanderers, it was the 25-year-old bowler who had the last laugh.

When the last ball of the day was bowled, the pacer had picked up three for 64. It is not earth-shattering. But it could be a sign that he is breaking the shackles.

It is not a sudden revival. Sharma had showcased his form with his five-for against Haryana in a Ranji Trophy tie late in November. On Thursday, he took India well ahead of South Africa. That Vernon Philander and Faf du Plessis stemmed the rot is a different story.

Disciplined but largely unlucky during the first two sessions — he did get Alviro Petersen early — but Sharma reaped the benefits after the tea interval. He got Graeme Smith to play and miss, and when he did find the edge, the ball sped to the boundary in streaky fashion. Sharma got the length right — pitching it up worked for him.

At 130 for one, South Africa seemed to be running away with it. Just then, Sharma stormed in from nowhere to hand the hosts a double jolt and the crowd a flurry of flying kisses.

Amla had no answer to Sharma. Getting the ball to reverse, he got the right-hander to shoulder arms to a delivery bowled outside the off stump. Kallis got a fuller, straighter and one on middle stump, he had the all-rounder caught in plumb for a first-ball duck.

There is a TV commercial doing rounds, based on skipper MS Dhoni’s surprise decision to hand the ball to Sharma in the rain-affected Champions Trophy final and how it proved to be a correct choice. Many had questioned Sharma’s selection for the ongoing series, seems like Sharma is proving them wrong all over again. 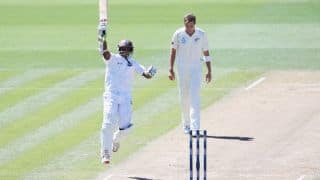