He has been the highest wicket taker of the Test series so far.

Ishant Sharma surprised everyone with a devastating spell against New Zealand in the second Test in Wellington on February 14, 2014. His six-wicket haul helped India bowl out New Zealand cheaply at the Basin Reserve. Shikhar Dhawan’s quick half-century put India in a strong position at the close of play on Day One. Shrikant Shankar analyses Ishant’s bowling in New Zealand’s first innings.

If anyone would have predicted that Ishant Sharma would be the leading wicket-taker in India’s two-match Test series against New Zealand, it would have been brave. But before the second day of the second Test begins, Ishant has almost made that prediction come true. The lanky pacer already has 15 wickets in three bowling innings. He has seven more wickets than the nearest challengers. His spell in New Zealand’s first innings of the second Test was as good as he has bowled for a long time. The conditions were in the bowlers’ favour, but Ishant still outperformed everyone else.

MS Dhoni won the toss for the seventh time in seven matches in the tour and as expected, elected to bowl first. The pitch at the Basin Reserve had a lot of grass on it and the ball swung sharply right from ball one of the match. India had gone in with an unchanged side from the first Test match. That meant, the pace bowling attack had Zaheer Khan, Ishant and Mohammed Shami. All three fast bowlers got the ball to swing, but initially found it hard to find the right length. Since the conditions helped were conducive for swing, bowling a touch fuller would not have been a bad idea.

But the seamers bowled a bit shorter on a length and the New Zealand batsmen were able to negate the movement. Ishant, though, used his height to good effect. He dug one in short and Hamish Rutherford could only glove it to Murali Vijay at first slip. Moments later, Ishant trapped Peter Fulton on the front-foot with an in-coming delivery and got him out leg-before. Soon after, debutant Tom Latham also got one similar to Rutherford and he feathered it to Dhoni behind the wickets. The wickets did not stop as Shami dismissed Brendon McCullum.

After the lunch break, Ishant dismissed Corey Anderson and BJ Watling with seaming deliveries that found the edges of their bats. He could also have picked up Kane Williamson, but he dismissed him on a no-ball. Ishant altered his line and length to great effect and that caused the New Zealand batsmen to lose their wickets. Shami was a bit expensive, but that is also due to the fact that he bowled fuller in the later part of the innings and the New Zealand lower-order batsmen were throwing their bats at every delivery.

Zaheer beat the bat on a few occasions, but was largely ineffective. This goes to show how good Ishant was on the day. On swinging conditions, it was Ishant and not Zaheer and Shami who was better. He has come under a lot of criticism in recent years, but on Valentine’s Day, 2014, he deserved full credit. He does not have the variations of either of the other two seamers and hence used his strengths well. New Zealand were bowled out for 192. Later, Shikhar Dhawan scored unbeaten 87-ball 71 to help India to 100 for two at stumps on Day One. They now trail by 92 runs and look good to build their innings and eventually a good lead too.

Ishant’s finished with figures of six for 51. These are his best bowling figures in test cricket. This is also his fifth five-wicket haul in the longest form of the game. India trail 1-0 in the two-match series. They are winless in the tour, but if in the end, India manage to win the second Test, it will be down to Ishant’s wondrous bowling on Day One. 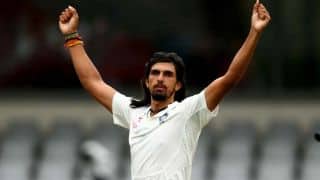 Ishant Sharma believes he has been bowling well despite criticism