"It breaks my heart to see what has happened to Junaid Khan" : Mohammad Zahid

"It breaks my heart to see what has happened to Junaid Khan" : Mohammad Zahid

Let’s start on a positive note. How good was it to see Pakistan defeat England 2-0 in the Test series? The Pakistan Test team has really forged itself into a formidable unit in United Arab Emirates (UAE) and the stability within the team is fantastic to watch. The top six knows its role and once the runs are on the board then the bowlers particularly Yasir Shah know what to do and what is expected of them. The scare in the first Test really brought the best out of Pakistan in the remaining Tests and the whole unit deserves a lot of credit for their recent record and performances.

Over the years, our strength mainly has been in the shorter formats and it’s horrifying to see the Pakistan limited overs teams in such poor shape. Our cricketers are brought up playing limited-overs matches so there is no excuse at all for such inept performances.

No Pace and No Yorkers

Historically, our fast bowlers have relied on reverse swing, pace and yorkers. I look at our limited overs team, apart from Wahab Riaz, I do not see any pace or any yorkers from them. Opposition batsmen must be thinking that it’s their lucky day when they see the medium pacers we are playing in our current T 20 Internationals (T20Is)and 50-over teams, jogging up to the wicket and bowling friendly half-volleys or half-trackers. You cannot win matches on flat decks with medium pacers who cannot bowl quick and cannot bowl yorkers.

He must be tearing his hair out at watching the lack of thought and skill currently being shown by Pakistan’s pace bowlers in the limited overs formats. He of course was a great bowler himself but once the players walk onto the field then the coach cannot do anything but watch. He must be doubting his own abilities as coach after watching some of the lovely dishes being served up by our pace bowlers. It is very easy to blame the coach when the team loses but the coaching staff can only prepare the players, once battle commences then it is down to the players to perform. It seems that too many Pakistani players of the modern era need hand-holding and lack the skill or temperament to succeed without being pampered by coaching staff.

There is absolutely no excuse for international cricketers not being fit and agile. Yes, players will get injured, players will pick up long-term injuries but what I have seen in the limited-overs series are some players, who clearly do not look fit enough to be playing international cricket. Players can pass bleep tests, read diet plans, players can go to the gym now, but it is their individual responsibility to ensure that they are eating the right things and maintaining their levels of fitness. When comparing the England and Pakistan levels of fitness, it was like chalk and cheese as was shown by the quality of fielding and running between the wickets. The top cricketers over the years have maintained their levels of fitness and have been in excellent condition throughout their careers. Sadly, several of our current crop of cricketers are simply unfit and overweight. This needs addressing by the Pakistan Cricket Board (PCB) and they need to adopt a strict policy against cricketers who are not conforming to the required levels of fitness.

The downhill slump of our ‘talented’ batsmen

It seems to be a recurring theme that Pakistani batsmen show a lot of promise at the start of their international careers but then there is a downhill slump. It happens too often and I think it is down to complacency and overconfidence. These boys need to be selfish, when I say selfish I mean they need to have this attitude that I will be the player who grabs this innings by the scruff of the neck and win the match for my team. I want to be the hero, I want to be the match-winner and show the world what I am capable of. Sadly what happens is that we see our so-called talented batsmen play one fine innings and then flop in the next 10 innings. Look at the levels of consistency of Virat Kohli and AB de Villiers this is what our boys should be aiming for.

It breaks my heart to see what has happened to Junaid Khan. Here was a bowler who was World-Class and could bowl with real pace, had skill and could swing and seam the ball. These days he looks a shadow of the bowler we once saw. My advice to Junaid is to stand up, get back on your feet and lift yourself and raise your performances once again. Whatever is going on behind the scenes is resulting in Junaid’s career being ruined. If there are issues with his attitude, fitness, or if there any issues that he needs to be addressed, then he needs to be told and not kept in the dark. If he is out of favour and not amongst the favourites at this moment, then he needs to be told why. Dropping him and then not addressing any issues is resulting in a fine bowler being lost to Pakistan cricket. I would urge all parties to resolve this situation as soon as possible.

I think it’s fantastic to see Aamer back playing cricket once again. What has really impressed me has been the way he has bounced back after 5 years. It is almost like he has never been away from cricket. So far he has stood up to the challenge and to the doubters, who thought he would not play top-level cricket again. It will have been mentally tough for him and a huge challenge but he has impressed me very much in domestic cricket in Pakistan and also at the Bangladesh Premier League (BPL). There will be tougher challenges ahead from him and the road back to being one of the finest bowling talents once again will be a long one, but all the signs are promising and I look forward to seeing him in a Pakistan shirt soon.

(Mohammad Zahid, a former fast bowler, took four for 64 and seven for 66 on his Test debut against New Zealand in 1996. But he went on to play just four more Tests. He also played 11 ODIs. The above article is reproduced with permission from PakPassion.net) 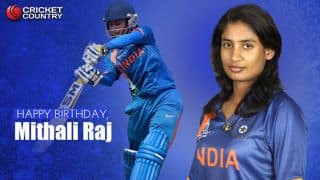