Ravi Shastri's recent comments proves that why he would have been a bad choice for coaching Team India.

You are given a date for a job interview, you choose to be vacationing in another country and give your interview online. Once a better candidate is chosen, you cry foul, ‘I was promised that the CEO, COO and MD will all be there, why the COO was missing?’ Can an interviewee decide on the internal dynamics of how the process is conducted? ALSO READ: Shastri vs Ganguly: Manjrekar, Bedi speak out

Maybe Indian cricket has different parameters with many luminaries’ thought-processes bordering on the lines of rights and inheritance. Ravi Shastri is clearly not a happy man. It is not easy for a straight-speaking man who wears a lot of pride on his sleeve to accept rejection. Before setting off to Bangkok, the former Team Director might have envisaged himself in the chair of Team India’s Head coach but unfair that a fair selection process ensued and shattered those dreams.

India great Bishan Singh Bedi speaks about “rights” that “Shastri has every reason to be peeved with selection process when one selector played truant.”

Going by Bedi’s words, Shastri was peeved with the entire process then why just target the “one selector”. The man in question, Sourav Ganguly, was one one of the four panelists alongside Sachin Tendulkar, VVS Laxman and co-ordinator of the committee, Sanjay Jagdale, who were entrusted with the job on finalising the head coach of the national side.

Ganguly had taken prior permission from the board to be excused for a particular time slot for a prior official commitment and therefore Bedi’s ‘truant’ word seems a little harsh; however, given his history of making personal attacks on Ganguly, it is not surprising. ALSO READ: Ganguly: Shastri should have shown bit more maturity

Coming to Shastri, the point arises again: can one question the internal dynamics?

Needle once: By questioning Ganguly’s absence in the panel, Shastri has set a cat among the pigeons. He could have dealt with the matter with dignity, with a touch of confidentiality, perhaps with a phone call or an email to the officials, perhaps. He has himself been a part of several BCCI committees in the past.

Mistake Two: Shastri’s comments in recent past made little sense. He has kept speaking about the team’s stupendous achievements under his guidance. Were India absolutely in doldrums when he took over? The Test series in England tour in 2014 was expectedly a disaster, but have India really pulled off anything unexpected? Yes, except the loss in Bangladesh.

Gautam Gambhir told ABP: “Ravi Shastri has been claiming that Indian team was very successful under him, but he never told us that India lost ODI series to Bangladesh, lost ODI series to South Africa at home. So, if you see, you played two World Cups and one of them was held at your home where you could only reach the semi-finals. That’s not a big achievement. You are trying to show that India became No. 1 in T20Is and Tests during your tenure, but what did India win in the last 18 months? You did not win an overseas series, you lost to South Africa at home, you went to Bangladesh and lost.”

Can one refute Gambhir’s claims?

Let us still give it to Shastri because the players’ morale had improved under him, and most of them spoke highly about him. However, several statements he made during his tenure bordered on the lines of boasting and carelessness. When we recall the successful coaches of Indian team in the past, the likes of John Wright and Gary Kirsten, we surely do not recall such lose talks. ALSO READ: How BCCI can end Sourav Ganguly-Ravi Shastri conflict

When Wisden India asked him on how disappointed he was, Shastri had said, “It is like planting a tree and then cutting it down just as it’s beginning to bear fruit.”

Can’t the hose graciously be handed over to Kumble, who would water the plant further so it gives the desired fruits? Maybe, for one rare instance Sanjay Manjrekar is right: “More than Sourav, I think Ravi is miffed with the rejection. It’s a new experience for him. BCCI have made the better choice as coach.”

Needle again: Shastri has a habit of repeating things and as a commentator; he has been dearly trolled for his clichés. Maybe that is where he got the habit. Ganguly did not react the first few times Shastri commented on the former’s unavailability during the interview; however, Shastri overstepped again when he went on air to say that Ganguly was being “disrespectful” to him and the job he was trusted as he decided to remain absent. This time, it was a free-hit for Ganguly, a man reputed for going loggerheads with bigwigs.

Grave mistake: Shastri should have raised the matter with BCCI instead of targeting Ganguly. His loudmouth caught the wrong target. By not deciding to hold back, he targeted one of India’s most loved cricketing icons with an incredible fan base, a man who once was reputed for his penchant of making detractors eating up their words.

Good, Shastri was not considered

There have been debates over Kumble’s appointment as India’s head coach with a section believing Shastri, who has done a reasonable job with the side for over 18 months, was a more deserving candidate. Winning and losing are a part of the game, and Shastri has surely not taken rejection in his stride and moved on, as he claims.

Shastri’s cricketing acumen is highly rated. There is no doubt over his noble intention. But his conduct reflects on lines of arrogance often makes him come across as a loud-mouthed man whose ego is bigger than his achievements. For once, Ganguly and his old foe Nasser Hussain will nod together in agreement.

It is fitting the four wise men zeroed in on Kumble as the head coach. While many are asking details on the transparency over this matter, Shastri’s conduct has made it clear on why he was not the right choice.

For the ugly volley of words that has marked this unwanted episode of Indian cricket and overshadowed Kumble’s day one in the office, BCCI should step in and ensure nothing else is spoken by these two big personas; otherwise, the media circus will only hamper BCCI’s efforts to regain the long lost trust. 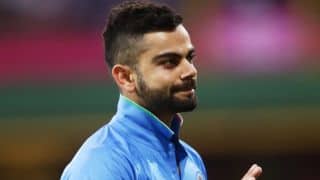