The Jack Crapp anecdote is perhaps not true. Or perhaps it is too good to be true.

According to the House of Names website, the surname Crapp dates back to at least the 11th century. The word originates from the Old English cropp ( to cut ). Crapp, typically used by mowers and field labourers, became a popular surname in Lancashire. This piece of information, as we will find out, is not as irrelevant as it sounds.

Jack Crapp was the most of that surname in the realm of cricket. He played 7 Tests for England and stood as umpire in 4 more. He scored 23,615 First-Class runs at 35 and was Gloucestershire s first professional captain. He went past the 1,000-run mark in 14 of his 15 English seasons, topping even 2,000 in 1949. He was also an excellent slip fielder.

Crapp was a contemporary of the Bedser twins, and the anecdote concerns one of them. The story, retold in numerous versions, is probably made up. However, I have to agree with Brian Johnston when he said it was probably untrue but I hope not. Indeed, it is too good a story to be not retold.

Don Bradman s men were all over England that summer, finishing the tour without a single defeat and earning the rightful moniker of The Invincibles. They demolished one county after another, and arrived in the fourth Test at Headingley with a 2-0 lead.

Crapp had proved himself earlier that month when the Australians had thrashed Gloucestershire by an innings and 363 runs at Bristol. Up against a total of 774 for 7, Crapp had scored 100 and 32 out of totals of 279 and 132. He earned a Test cap for the rain-hit Test at Old Trafford. He scored 37 and 19*, and was retained at Headingley.

England did have a serious chance of winning at Headingley or everyone thought so after they set Australia 404. Nothing remotely close happened. Arthur Morris got 182 and Bradman himself remained unbeaten on 173. At one point Australia actually threatened to win by 9 wickets. They eventually reached there after losing only 3 wickets, scoring at 3.53 an over. Alec Bedser bowled his heart out, as did a young Jim Laker, but to no avail.

Our story dates back to the evening before the Test. The English cricketers had been put up at Queen s Hotel, Leeds. Crapp had arrived late, apparently at the same time with Bedser. Johnston cites a Surrey vs Gloucestershire match earlier that day as the reason for their delay, but nothing of the sort took place. But then, Johnston himself is unsure of the story, so we can let that one go.

As Crapp approached the counter, the female receptionist asked her perhaps out of habit: Bed, Sir?

It is not clear whether she had inserted the much-needed pause between the two words of the question. Even if she did, Crapp failed to notice. He assumed that she had mistaken him for Bedser.

No, Crapp, he corrected her.

Without a change in tone, the receptionist informed second door on the left . Then she returned to her register. 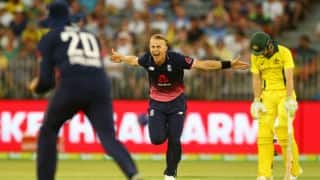 England one of the favourites to lift 2019 World Cup: Trevor Bayliss