Alexander Cowie was as erratic as he was quick. However, on that day at Fenner s he found Jack Hobbs too hot to handle.

On May 9, 1911, Alexander Cowie announced he was going to hurl them faster than anyone in the history of Fenner s. Abhishek Mukherjee chronicles the response of Jack Hobbs.

Alexander Cowie could be genuinely fast, but he could also be ridiculously erratic. Nothing exemplified this more than the Oxbridge match of 1907, where he, to quote Wisden, caused a sensation in his first over by bowling a couple of wides and dismissing A.J. Evans and R. Sale. The almanac added that he was the most successful of the Cambridge bowlers that season.

His numbers tell the story eloquently. His First-Class cricket economy rate was 4.23, an absurdly high number in the pre-War era. But he also took a wicket every 34 balls, which brought down his average to 24. Some fast bowlers are like that.

He played for Hampshire twice, and in one of them he had characteristic match figures of 44-4-179-7 against Lancashire. But nothing exemplified this more than his performance on First-Class debut, when he returned figures of 13-0-67-5 against Surrey in 1910. He played against Surrey once more, next year, which is the match we are concerned about.

The undergraduates opened bowling with Cowie and Henry Grierson, a left-arm medium-pace bowler, against the outrageously strong pair of Tom Hayward and Jack Hobbs. Earlier in the match, Hobbs had taken new ball with Rushby and had taken a wicket.

Cowie was all pumped up one he got a chance to bowl at Hobbs. Do you want to see the fastest ball ever bowled at Fenner s? he demanded of Grierson. Grierson urged him on, keeping in accordance with usual college student behaviour.

Then watch it, Cowie announced as his face broke into a broad smile, and steamed in. Let me quote Grierson for what followed: Down he came like an ox, puffing and blowing and his arms awhirl. Hobbs leant backwards just a trifle. Crack! Third man on the boundary never sniffed as it went over the ropes, first bounce!

Cowie was obviously peeved, but there was no way he was going to give up. Sorry, not a very good one, but keep your eye on this for speed, he told Grierson as he passed the latter.

Hobbs moved a fraction forward. Crack! Fine-leg never got a move to it, much less a hand, recollected Grierson.

Cowie bowled no more than 9 overs. He conceded 55, included 2 wides. John Berry hit him to bits that day, recalled Grierson. As for The Master, he scored 93 before he was caught and bowled by Grierson.

Cowie was 25 when The Great War broke out. Like all able-bodied Englishmen, he was commissioned to the front. He survived a wound in 1915, but not the second one.

Alexander Gordon Cowie, cricketer at Charterhouse School, Cambridge University, and Hampshire, and Captain in the Seaforth Highlanders, passed away at Amara, Mesopotamia, on April 7, 1916. He was only 27. 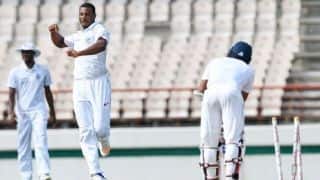