Kallis took a special liking to the Indian bowling which frustrated fans rooting for the Men in Blue.

Jacques Kallis quit international cricket after a tough series in Sri Lanka. The Indian fans wouldn’t forget him as he was a thorn in their flesh for numerous years. Even in his last Test, he smashed a ton against the Indians to leave a lasting mark. Nishad Pai Vaidya writes how the Indian fans would remember Kallis.

An Indian fan will never forget Jacques Kallis! Though he didn’t have that exuberant personality that often endears a player to the fans, Kallis more than enough made up for it with remarkable poise on the field of play. Though there wasn’t that flamboyance of Shahid Afridi, or the danger of Inzamam-ul-Haq, there was always that lurking danger when Kallis strode out to the middle. When in form, nothing seemed to come in his way — even if the bowlers had bowled from half-way down the track, he would have defended it with assured confidence.

Kallis had been a thorn in India’s flesh a fan would say. ‘He didn’t even spare us in his last Test’ they would say. With criticism surrounding his poor form in Test cricket, he called it a day before the Durban Test in 2013. It was an emotional moment for the South African side as this South African would leave the white flannels. A colossus was leaving, but not without one final flourish. Though that innings wasn’t Kallis’ best, it was another account of his greatness. On such a moving occasion, he didn’t get swayed by emotions and essayed a remarkable knock to help South Africa win.

But, Kallis’ liking for the Indian bowling goes back to the 1999 World Cup. At the Hove, he scripted a calm knock to rescue South Africa from trouble. Indian fans had felt, the game is done and dusted. They had after all troubled the top order. But, this unshakable rock was just making his mark in international cricket. It was just a sign of things to come for India. Though he had played a few good knocks during the tri-series in 1997, but this was where the Indians were left to rue what might have been.

The next year, Kallis was at it again, but in Test cricket. A calm 95 at Bangalore was instrumental in sealing a South African series win, their first and only one till date in India. The list just goes on. There was that 116 not out at Durban in the first One-Day International (ODI) in 2006, an innings that looked slow but outscored the whole Indian team. And, then there was that maiden double ton at Centurion in 2010, which very nearly overshadowed Sachin Tendulkar’s historic 50th Test ton. Later in the series, as India tried for a victory at Cape Town, he essayed two tons to keep them out, the second one was on a minefield.

These are only some memorable knocks, but when South Africa will play India again, there won’t be that feared figure. Bowlers won’t focus on getting that one many out, who would calmly take the South Africans to victory. Those typical drives off the backfoot when the fast bowlers erred outside the off-stump would no longer frustrate the Indian captain. That character, a man who overcame the rigours of all the formats with distinction, will always have a special place in the memory of the Indian fans — that is respect! 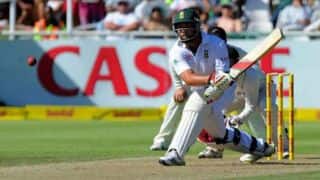 Jacques Kallis will be remembered for consistency with both bat and ball, says ICC Chief Executive David Richardson 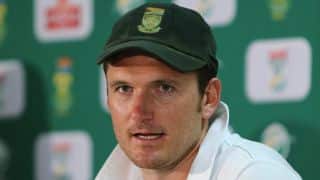 Graeme Smith: Great to see Proteas back as No 1 Test team