Kallis announced his retirement after a great career for South Africa.

Jacques Kallis, the greatest among the great South African all-rounders, has finally bowed out of all forms of cricket. Abhishek Mukherjee pays a tribute.

Finally it has happened. It came out on Twitter first. The first person in the newsroom yelled the dreaded news. There was silence before the articles were assigned and keyboards sprung into action. Jacques Kallis, arguably the greatest all-rounder of all time, has bowed out of all formats of international cricket.

It was different from any other news: when he called it quits from Tests in December 2013 we knew he would still go on till World Cup 2015; there were still hopes of getting a slice of the greatest all-rounder across formats (with 25,534 runs, 577 wickets, and 338 catches from 519 matches he outdoes others in sheer volume of numbers) in action.

Kallis did make it to the Sri Lanka tour. He scored zero, one, and four, and we had joked that he was scoring in square numbers, and by the World Cup he would be accumulating gargantuan scores. He had looked out of sorts, but it did not look like there was an issue he could not get around — especially with South Africa clinching their maiden One-Day International (ODI) series victory on Sri Lankan soil.

Those broad shoulders, that barrel chest, those bulging biceps, those intimidating wrists will not take field in whites or greens anymore; when South Africa will be down at 15 for two, those reassuring oversized boots will not tread the grass again to show the broadest of blades to the bowlers; when the opposition will have a 150-run partnership the captain will look around, somewhat helplessly, in search of the man with receding hairline who would have given him the break.

South African cricket will never be the same.

Cricket will never be the same.

It was the same Kallis who had stood up in a dejected South African dressing-room at New Wanderers after Australia had set them a nigh-impossible target of 435. With the plainest of faces he came out with the line that changed it all: “Okay, guys, I think the bowlers have done their job. Now it’s up to the batsmen. They’re 15 runs short; this is a 450 wicket”; and South Africa chased it down.

There would be no one this time. No one to tell them in that all-too-familiar gruff voice to go ahead with their jobs; if anything happened, he was there to hold fort. He was the grand patriarch who played alongside Fanie de Villiers and AB de Villiers; he held the South African batting together as time witnessed the man at the top being metamorphosed from Andrew Hudson to Alviro Petersen and the new ball was passed over from Brett Schultz to Vernon Philander.

He was there all along. He had to be there. He was the man who linked the eras. He was the rock that stood the test of time. Finally, after decades of shielding the men in green and gold from storms and fires and floods, the Colossus fades into sunset, robbing the sport of a massive chunk its grandeur.

Adieu, King Kallis: you will be missed. 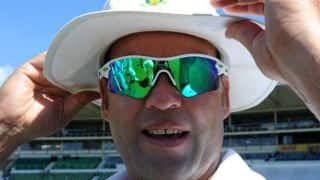 Jacques Kallis is one of the greatest players to grace cricket: Haroon Lorgat 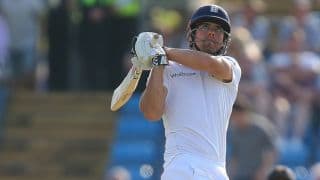