Jail may not be the best solution to punish match-fixers

Jail may not be the best solution to punish match-fixers

Once they start doing time, they are mixing with hardened criminals

I have quietly observed the latest proceedings on match-fixing over the last few weeks, but have been doing so quite closely since 1997 where I was approached by an illegal bookmaker in Sharjah whilst captaining the England cricket team. Whilst my story has been written about, my thoughts on the whole matter remain solely in my head.

I am aware how strongly people feel about their sport and no one is more of a sport fanatic than me. However I have tried to look at the topic of match-fixing as a whole rather than in isolation – which is quite difficult to do.

Firstly, let me start by saying that I am not sure that sending people to jail for cheating in a game of cricket is where we should be at as a society. For me jail should be reserved for the dangerous members of society – murderers, rapists, armed robbers, pedophiles, people who commit other violent crimes etc. I don’t feel that match-fixing fits into this bracket.

So what punishment should the match-fixers get? Well, that is the million-dollar question! The punishment for me has to serve as a measure to prevent people from doing it again. Not as some weird way of making all of us people who feel let down by the match-fixers achieve some sort of revenge. I have to add at this point that match-fixers are not the only people I feel shouldn’t go to jail for their crimes. There are a host of other crimes that I feel there are better measures – that would enable rehabilitation – than sending people to jail with as well.

An example of this would be Michael Jackson’s doctor. By all means prevent him from ever being able to practice again as a doctor, but jail? He was just doing what he was told to do by his boss – and his patient was one of the most powerful men in the world – and most likely a whole host of people around him. Unless he was deliberately trying to kill his patient, then I think to prevent him from working as a doctor ever again is punishment enough. Does he deserve to go to jail? I think not. Does he deserve the honor of practicing again as a doctor? Definitely not! He has proved that he doesn’t possess the qualities that differentiate doctors from most other professions.

Back to match fixing. Like Michael Jackson‘s doctor, when you take on the title of international cricketer, a whole host of behaviors become unavailable to you. And by accepting to be an international cricketer you also accept the responsibility that goes with it. It is such an honor – yes, even for those who match-fix – to play for your country. Just as Michael Jackson’s doctor was probably the proudest man in the world when he received his qualification as a doctor and swore to make decisions that were for the best interests of his patients. To have this taken away from you is a massive punishment and possibly enough.

So what goes wrong? Why do these people fall for the lure of match-fixing? Well, why do people fall for any illegal behavior? For me, in most cases it is greed. But there is more to it than this.  A lot of the guys who have been caught match-fixing in recent times come from very poor backgrounds. For most of these people it is a way out of a life of poverty. And I am not talking about for just them; I am talking about their families. Put yourself in this situation…You are pulled out of your village and given a job in a highly- paid position. Your village has no electricity of clean running water, yet you are thrust into the world of international cricket. For your entire village, you may be the one chance at a better life for all of them. Now let’s presume this job could end for you at any time. You can be injured, dropped or even just not be quite good enough. If you are lucky and remain the best in your country – in a sport where everyone wants to be the best – you may have a career that lasts 5 to 10 years – compared to most people whose career lasts 45 years. During the time you are playing international cricket you really need to make the most of it.

Add to the fact that you enter a changing room and are offered large sums of money to perform simple things like bowling a no ball – not necessarily throwing a game or underperforming. A lot of you may still be saying that this doesn’t excuse the behavior. Ok, what if you were told you would be dropped from the team and sent back to your village if you didn’t? This would end not just your hope but your entire villages hope of a better life. Add to the fact that players you respect and have looked up to are also doing it. Add to the fact you are a teenager or in your early 20s – when we have all made bad decisions. I know as a youngster coming into the England team if all the other players were doing it the chances of getting involved would have been higher, especially if the senior players told you to do it. A final point on this matter is that once the individual succumbs to the temptation once – that may be one no ball – then they are at the disposal of the illegal bookie forever, as this will be held over the head of the player performing the act for the remainder of their career.

My reason for pointing these things out isn’t by any means a way of excusing match fixing – far from it. I want more than anyone a game clean of match-fixing. Can I comprehend ever match-fixing? Not in a million years. But was I exposed to conditions like I mentioned earlier? No! Did I come from a fortunate background and play with a whole team of other people from fortunate backgrounds? Yes! So I don’t truly understand what it’s like to be that desperate for money? Probably not! I think that any player from England or Australia or just players from fortunate backgrounds that commits match fixing has more to answer to for me. That doesn’t mean match-fixers should be excused – far from it. I believe the way to do it is to humiliate and take away the persons chance of playing again.

Let’s look at what we want from this. Do we want people to be punished immeasurably for our own revenge? Or do we want a game clean of match-fixing? Certainly the latter. The sole goal is to prevent match-fixing, .not to crush people’s will to live. I feel our game has a responsibility/opportunity to look after as many people as possible who choose to play it, and not just international players.

Ok, let’s presume we send the match-fixer to jail. What is gained? I think only a feeling of revenge from us the onlookers. Once they start doing time, they are mixing with hardened criminals – potentially opening up doors to bigger crimes for them – and we “the tax payer” are paying for them. By publicly shaming them and banning them for five years – longer than most players play for anyway – and offering them a job on very basic wages to go and preach against match-fixing, we are helping to rehabilitate the match- fixer and spread the word against match-fixing – and that is the goal. I am a firm believer everyone deserves a second chance for crimes like these.

When I was approached, I was mortified – in fact, angry. I was angry that someone actually thought I would be in any way interested in being involved in that type of behavior. My thoughts then were that people should go to jail. And I wouldn’t have listened to anyone else’s opinion otherwise. Now I have been around for a couple more decades and have seen a lot more and witnessed some of the proper crimes going on in our world. I realise that these things deserve more thought. Are my thoughts correct? Probably not. But what I do know is that sending the match-fixers to jail isn’t a black and white topic. There are many deeper facts to consider. All I ask is we think about the topic and engage our brains to come up with the best and fairest way of preventing this from blighting our great game.

(Adam Hollioake is an ex-captain of the England One-Day cricket team. He led Surrey CCC to an unprecedented nine trophies in seven years of captaincy and was named Wisden Cricketer of the year in 2003. You can follow his blogs at adamhollioake.com or follow him on twitter at twitter.com/adamhollioake) 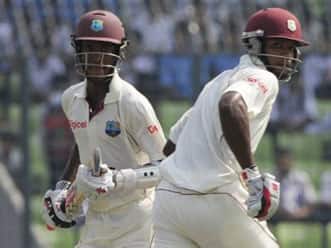 Baugh’s brilliance behind the stumps a sight for sore eyes