Anderson crossed the laxman rekha in not addressing Jadeja as Sir.

James Anderson may be guilty of offences graver than “pushing and abusing” Sir Ravindra Jadeja, which is a Level 3 offence under the International Cricket Council (ICC) Code of Conduct. The England fast bowler allegedly failed to address Sir Jadeja as Sir during the course of a colorful exchange of views. Anderson may face a mere two Test ban for the first offence but if found guilty of failing to address Sir Jadeja by the requisite honorific, he could be slapped with a life ban. “It’s a very grave charge, one that completely goes against the spirit of the game. This could spell the end of Anderson’s career, I’m afraid,” an ICC lawyer opined.

The disturbing incident allegedly took take place during India’s second innings when Anderson managed to get Sir’s prized wicket and proceed to give him a send-off. However, in the process of telling him where the pavilion is, Anderson failed to add “Sir” at the end of the robust exchange. Sir walked away in a huff, seething with rage. The Indian dressing room reacted with shock after Sir informed them of what had transpired. “Colorful exchanges are fine, these things happen. But Anderson crossed the laxman rekha in not addressing Sir as Sir. After the internet knighted Sir, even the potty-mouthed Aussies have been scrupulous about addressing him with respect,” a member of the Indian camp disclosed.

With the alleged altercation now threatening to snowball into an even bigger controversy than the infamous Monkeygate incident, the ICC has flown in a special lawyer to mediate between the two sides. The English Cricket Board (ECB) for its part is completely backing Anderson. “Jimmy is incapable of behaving so ungraciously as to fail to accord the respect that is due to Sir Jadeja in light of his legendary exploits with both bat and the ball. The truth, according to Jimmy, is that there was a lot of background noise when Jimmy was telling Sir where the pavilion was and the ‘sir’ part may have been lost in the din. Jimmy is devastated that such grave charges have been leveled against him and he is determined to clear his name through due process. The ECB fully stands behind Jimmy,” the official ECB press release stated.

Considering that Anderson’s career now hinges on the legal outcome, the Indian team is being cajoled into withdrawing the charges and only pressing ahead with the relatively lesser offence of “pushing and abusing” Sir Jadeja. 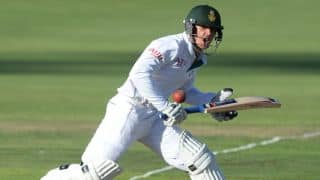