J & K were 253 for 5 in the first innings before they lost their last 5 wickets for a single run.

Playing at Wankhede Stadium, Jammu and Kashmir created history by inflicting a four-wicket defeat upon Ranji Trophy giants Mumbai, pulling off one of the biggest upsets in the history of the major Indian domestic tournament. Abhishek Mukherjee looks at a few other unexpected Ranji Trophy encounters.

Parvez Rasool must have been a worried man. Chasing 215 at Wankhede Jammu and Kashmir (J & K) were cruising on 171 for 3 when Mumbai gnawed back into the match. Pradeep Khajuria hit one back to Iqbal Abdullah, and on the same score, Rasool himself was bowled by Vishal Dabholkar.

J&K were 253 for 5 in the first innings before they lost their last five wickets for a single run. But Hardeep Singh and Waseem Raza would not let that happen again. They added a crucial 44 before Shardul ran out Raza, causing a small distraction — but Obaid Haroon hung around with Hardeep to create history.

The Wankhede encounter would go down in history as one of the biggest upsets in Ranji Trophy history. Let us look at a few others:

Having won back-to-back Ranji titles, DB Deodhar’s Maharashtra were certainly the favourites going into the West Zone encounter against Nawanagar. Deodhar even won the toss and batted first — before his side — one that boasted of BB Nimbalkar, Chandu Sarwate, Ranga Sohoni, Wazir Ali, and Deodhar himself, ran into Shute Banerjee.

Banerjee bowled unchanged with figures of 9.2-3-25-8. Bowling alongside him was Mubarak Ali, who played the perfect foil with 9-3-13-2. Between them they routed the defending champions for 39. Then Maharashtra hit back, reducing Nawanagar to 78 for six, but once again Banerjee came to their rescue; he was last out as Nawanagar secured a crucial 120-run lead.

This time it was Vinoo Mankad’s turn: he took the first five wickets, and though there was resistance from Krishnarao Jadhav, Banerjee struck two crucial blows, and Maharashtra were bowled out for 189. Walking out at 24 for two, Banerjee hit out as Sorabji Colah held one end up; Nawanagar won the match by eight wickets inside two days.

Bombay’s golden era was about to start. They had won three titles between 1941-42 and 1948-49, but they were yet to become the all-conquering side of the 1960s. However, when they locked horns with Gujarat that season, the side boasted of Dattu Phadkar, Madhav Mantri, Vijay Merchant, Rusi Modi, Gulabrai Ramchand, Vijay Manjrekar, Sadu Shinde, and Subhash Gupte.

To be fair to them, Gujarat boasted of Mankad, Polly Umrigar, Gogumal Kishenchand, Jasu Patel, and Deepak Shodhan, but Bombay was easily the more dominant side of the two. Their batting, especially, was matchless: in their previous game, against Maharashtra, both Phadkar and Ramchand had slammed double-hundreds before Phadkar had declared on 725 for 8.

It was different this time. Pheroze Cambhatta put Bombay in, and none of the batsmen really got going; Mantri and Modi put up some fight, but after being 118 for 2, Bombay were bowled out for 229. Five Gujarat batsmen scored fifties in response (three of them went past eighty); though Shinde bowled a marathon spell Gujarat managed to reach 110.

Then the drama began. The unheralded Hussain Reshamwala (who took 19 wickets from 13 First-Class matches) suddenly reduced Bombay to 15 for 4. Bombay never recovered, and were bowled out for 110, losing by an innings and plenty.

Daljit Singh’s Bihar did not top the East Zone table in the season; they qualified as the runners-up, but their famous run started after that. They were certainly not the favourites going into the semi-final at Kotla, but Ramesh Saxena’s hundred lifted them to 392. Chetan Chauhan hit back with a hundred, but Sumit Shome and MR Bhalla gave them a 58-run lead.

Delhi’s only chance was to go for an outright win, but the Bihar openers added 72. A late collapse left Delhi to chase down 266, but this time Sekhar Sinha decided to step in. Bowling unchanged he returned figures of 17.3-2-65-6, while Ajay Jha supported with 18-4-38-2. Delhi collapsed for 108.

Karnataka had stopped Bombay’s famous run in 1973-74, and had come runners-up the following season. They were probably happy with the fact that Bihar had toppled Delhi. Though the main Karnataka players were out on Test duty, Vijay Kumar’s men were still favourites.

They came down crashing to 157 on Day One against Sekhar Sinha, who bettered his 6 for 65 in the previous innings with 7 for 79. Though Bihar were reduced to 119 for 4 at one point, Saxena (143) almost equalled Karnataka’s score single-handedly. Tilak Raj (not of six sixes fame) and Daljit contributed as well, and Bihar secured a 237-run lead.

Vijay Kumar and Roger Binny added 74 for the opening stand, but Bhalla and Shome kept on making steady inroads. Karnataka were eventually bowled out for 268, with only AV Jayaprakash (of Anil Kumble’s ten-wicket fame) standing firm with an unbeaten hundred. Bihar chased down the paltry target without losing a wicket, but went on to lose to Bombay in the final.

The minnows of South Zone, Goa were almost never taken seriously by the major sides. Karnataka, on the other hand, were the defending champions, and went on to win the trophy in 1997-98 and 1998-99 as well. On this occasion, however, Goa got off to an excellent start thanks to their captain VB Chandrasekhar (former Tamil Nadu star). There were contributions lower down the order, and though Dodda Ganesh claimed 5 wickets, Goa managed to reach a competitive 346.

The rest of the match belonged to the medium-paced bowling of Jayaraman Gokulakrishnan, who finished with match figures of 11 for 114. It was easily the highest point of his career. Sujith Somasunder stood firm with 70, but Karnataka — mighty Karnataka — collapsed to 114. Following on, they were again skittled out, this time for 151. It was easily one of the greatest upsets in the history of Indian domestic cricket — more so because of the inexplicably one-sided result.

Lt Col Hemu Adhikari had turned Services into one of the strongest domestic sides of the mid-1950s (they came runners-up in 1956-57 and 1957-58). Barring Adhikari, the nucleus of the side consisted of stalwarts like Chandrasekhar Gadkari, Raman Surendranath, Apoorva Sengupta, Venatappa Muddiah, and Narain Swamy.

Things were different half a century later. Uttar Pradesh had lifted the Trophy in 2005-06, and had reached the final in 2007-08 and 2008-09. Anyone would have backed Mohammad Kaif’s men (who came into the quarter-final with most points) against Services, who had qualified from Group C (Plate Group).

Day One proved the critics wrong. Soumik Chatterjee put Uttar Pradesh in on a pitch that offered both bounce and seam movement, and before they realised what had hit them the favourites found themselves reeling at 76 for eight just after lunch. The medium-paced trio of Services — Suraj Yadav, Nishan Singh, and Shadab Nazar — turned out to be more than a handful. Air Corporal Nazar, who hails from Uttar Pradesh, finished with five for 51.

Ferocious hitting from Imtiaz Ahmed took them to 134 with a 35-ball 53, but despite some persistent bowling from Imtiaz, Ankit Rajpoot, and Sudeep Tyagi, Services managed a 20-run lead at stumps on Day One. They extended it to 129 next day, thanks to a dazzling 112 from Rajat Paliwal — an innings that came off only 133 balls. The Uttar Pradesh bowlers bounced Paliwal throughout an innings; he took blows on his body — but it is never easy to push soldiers out of your way.

The Uttar Pradesh spinners — Piyush Chawla and Ali Murtaza — bowled a mere 10 overs between them. There was, however, bad news for Services: down with a knee injury, Chatterjee limped out at No. 11, and was trapped leg-before by Rajpoot for a golden duck. He was clearly unfit to walk, let alone bat.

Then began Yadav’s battle against an Uttar Pradesh fightback. Tanmay Srivastava scored a fifty, as did Arish Alam — but Yadav kept taking wickets (he finished with seven for 71); they led by a mere 65 when the seventh wicket fell, but Imtiaz came to the forefront again, this time scoring 40 not out off 37. Uttar Pradesh added only 43 during his stay, and Services need to score a mere 113.

But Rajpoot was yet to give up. During a fiery spell alongside Imtiaz, Rajpoot took out five Services wickets. They still needed 59, and perhaps for the first time in the match they were pushed on the backfoot. Then Chatterjee, a Sergeant in the Air Force, emerged to play one of the bravest innings Ranji Trophy had witnessed.

Chatterjee could not walk; the era of runners was history; he could not take the sharp singles, and hobbled to the other end only when there was enough time. When he realised he may not make it, he hopped on one leg to the other end. The target started to come down. The ruthless Uttar Pradesh bowlers bounced at Chatterjee, but he responded with two pulled sixes off Tyagi and Rajpoot.

Encouraged, Paliwal slog-swept Chawla for six. Finally, with the scores level, Chatterjee skipped on one leg to dispatch Imtiaz over mid-on to finish the match. He had to be carried out of the ground by his teammates. 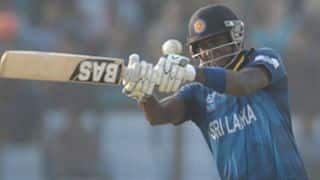