Jasprit Bumrah lashes out at Jaipur Police for using his ‘no-ball’ picture as road safety campaign, and rightly so

Jasprit Bumrah lashes out at Jaipur Police for using his ‘no-ball’ picture as road safety campaign, and ri

At 23, Jasprit Bumrah has 59 international wickets form 40 matches at 21.59. He has emerged as one of the finest death bowlers in the game.

Sportspersons try. At times they succeed. At times they fail. The success-failure eventually determines their legacy. But they try. A popular saying goes by, If they deserve the laurels and accolades, they should also be prepared for the brickbats.

The emotions travel a pendulum path for India-Pakistan games. If it s a final, for fans it s no less than war. India s defeat in hands of Pakistan in the ICC Champions Trophy 2017 final was received with extreme reactions. Just like another human being from the planet Earth, Jasprit Bumrah had one bad day in the office. And he became a subject of ridicule.

It was his no-ball that produced the edge of Pakistan s centurion Fakhar Zaman that carried to MS Dhoni s gloves. The batsman walked back. The umpire was fine. Only a third umpire intervention proved that Bumrah had overstepped. Zaman paved the way for Pakistan s 338 and the win.

The dim-witted armchair fans that are out aplenty fail to notice that even the umpire had erred, and it was Bumrah s skill that produced the chance. Making scapegoats is an easy job. Bumrah s one off day became his reason for the escalating unpopularity. ALSO READ: Jasprit Bumrah s no-ball used by Faisalabad s traffic police for safety campaign

At 23, Bumrah has 59 international wickets form 40 matches at 21.59. He has emerged as one of the finest death bowlers in the game. He has replaced Lasith Malinga as Mumbai Indian s preferred death bowler. All of it counted to nothing and the young kid on whose shoulders rest hopes of India s bowling fortunes became a subject of hate jokes.

Remember, a young Zaheer Khan and an experienced Javagal Srinath had failed to rise to the occasion of the 2003 World Cup final.

The buck did not stop for the fans. From Jaipur to across the border in Peshawar, police have used Bumrah s no-ball still for road safety campaign. Don’t cross the line. You know it can be costly, reads the Jaipur billboard at the bus stand.

A hurt Bumrah reacted to the same on Twitter:

@traffic_jpr well done Jaipur traffic police this shows how much respect you get after giving your best for the country. pic.twitter.com/y0PU6v9uEc

@traffic_jpr But don’t worry I won’t make fun of the mistakes which you guys make at your work .because I believe humans can make mistakes

It is easy to forget that a 23-year-old was representing a nation against a good side and battling nerves. Celebrities are easy targets and scapegoats. Would they have done the same for a politician?

But good senses prevailed, finally. The Jaipur traffic police in return apologised to the 23-year-old bowler, calling Bumrah an inspiration for the youth.

Dear @jaspritbumrah93, our intent was not to hurt your sentiments or the sentiments of millions of cricket fans.

.@jaspritbumrah93, we only intended to create more awareness about traffic rules.

.@jaspritbumrah93, you are a youth icon & an inspiration for all of us.

Bumrah has made a statement with his tweets by not crossing the line of rudeness or sarcasm with his tweets. In return, he has got an apology as well. It remains to be seen if Jaipur Police make an example out of this and go on to remove the billboard as well. 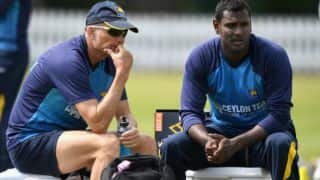 Sri Lanka will have a little piece of my heart, says former coach Graham Ford