Born September 14, 1958, Jeff John Crowe is a former New Zealand captain and currently a renowned ICC match-referee. On his 57th birthday, Suvajit Mustafi looks at 12 facts about the man who turned up to answer the calls of his homeland.

Jeff is the son of Dave Crowe, a New Zealand First-Class player, who has played for Canterbury and Wellington.  His younger brother, the gifted Martin Crowe, went on to be one of the greatest New Zealand batsmen and led them to World Cup semis in 1992.

Both Jeff and Martin are cousins of Hollywood superstar Russell Crowe. The cousins share a close bond.

Crowe decided to ply his trade across the Tasman Sea. He made his First-Class debut for South Australia against the touring Indian side. It was an inauspicious start as he scored a naught and one. However his Shield debut was impressive and he scored 48 and 54.

Crowe had a prolific 1978-79 season and in 1981-82, he scored 704 runs at 50.28. It’s believed Australian selectors were keenly monitoring his progress and he had a chance to turn up for Australia but he returned to New Zealand and played for Auckland to boost his chances for playing for his country of birth.

Quite ironically, he made his international debut for New Zealand against Australia. In a One-Day International (ODI) at Melbourne, he managed only seven. Two months later, he played his first Test and scored 12 against Sri Lanka.

New Zealand were absolutely steamrolled by West Indies in the 1985 tour. Against the likes of Michael Holding, Joel Garner and Malcolm Marshall, Crowe put up a gutsy effort. He top-scored for New Zealand with 252 runs at 36. He scored 64 in the first innings of the first Test at Port of Spain and then a 112 at Kingston. New Zealand went on to lose the Test series 2-0.

In April 1987, Crowe scored a ton at Colombo in his first Test as New Zealand captain. That was also his last hundred in Test cricket. Crowe captained the side in six Tests, winning none. In ODIs, from 16 matches, he enjoyed success in four.

He moved his base to Florida, US and tried his luck in business. He ran a business for golfing holidays.

His love for the game pushed him back to it. Crowe became a ICC match-referee in 2004.

11.  The goof-ups in the consecutive World Cup finals

Crowe is a respected match-referee and has had a good run in the role however there are some notable glitches. The 2007 World Cup final ended on a sorry note, in utter darkness. He failed to manage the situation but he did accept the blame with dignity. In the following World Cup final, he failed to hear Kumar Sangakkara’s call at the toss at a noisy Wankhede Stadium and the coin had to be flipped again.

12.  Leaping one milestone after another 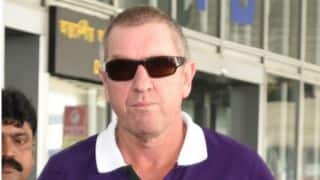