Jesse Daniel Ryder is one of the most talented cricketers to have emerged from New Zealand.

Jesse Daniel Ryder, born August 6, 1984, is one of the most talented cricketers to have emerged from New Zealand. For a batsman with abundance of talent, Ryder has really not lived up to his immense potential. On his 33rd birthday, Suvajit Mustafi looks at 20 interesting things about the Kiwi cricketer who has had a rough, tough yet a fascinating journey.

1. Difficult childhood: Ryder s parents divorced and he lived with his father Peter. In an interview with stuff.co.nz, Ryder said, I didn t really have the best upbringing in Napier because my old man was always going out and coming in late. My mate and I would just stay at home on our own at least two or three times a week just playing PlayStation or backyard cricket. My dad would turn up in the early hours of the morning .

2. Huge blow: When Ryder was 14, his father dropped him to a friend s place and buggered off to Australia, never to return. His mother lived elsewhere and he didn t want to leave Napier. Those were tough times as he began to party, he spent time at friends places and slept on their couch. His encounter with drinking began then. However it didn t impact his cricket.

3. Under-19 World Cup: By the time he was 16, Ryder was playing for Central Districts Under-17 side. He performed consistently and in International Academy Challenge 2002 at Townsville, playing for New Zealand Academy, Ryder at the age of 18, slammed 181 against Australian Academy. He was soon picked for the under-19 New Zealand side in the World Cup 2002. Ryder was the highest scorer for New Zealand in the tournament with 178 runs from five innings. He played alongside Ross Taylor, Neil Broom, Rob Nicol and Peter Borren.

4. Contracted terminated for missing flight! Despite Ryder s good form with the A side, New Zealand selectors ignored him. Hurt by that, he opted out of selection and left for England. Ireland had offered him a lucrative contract of 1,000 a match. But when he missed a flight and didn t turn up at London in time; his contract was subsequently terminated. Such instances went on to become too frequent in his controversy-marred career.

5. Eying an England spot: Ryder played club cricket in England and was extremely successful. He considered playing English County full-time and pondered the idea of playing for England as both his grandfathers were British.

6. A Black Cap, finally! February 2008, finally saw him making his international debut and it came against England. He made an impact in the very second One-Day International (ODI) when he scored an unbeaten 79 from 62-balls in his second match.

7. Brawl and ban: After the ODI series against England, Ryder got involved in bar brawl where he injured his hand. He later verbally abused a medical staff and earned himself a three-month ban. It only delayed his Test debut.

8. Finding trouble, again: In January 2009, when West Indies were touring New Zealand, Ryder, after a late night drinking session missed a team meeting the next morning and then he missed the training session. He was dropped for the following ODI.

9. Targeting the Indians: When India toured New Zealand in 2009, India dominated the ODI and Test series. Ryder was New Zealand s highest run-getter in the ODI series piling 225 runs at 56.25 and at a strike-rate of almost 107. The highlight was his 105 from 80 balls at Christchurch while chasing a massive 393 for win. He once again topped the charts for the Kiwis in the Test series scoring 327 runs at 65.40. Coming in at dire straits he scored two hundreds, the second one being a double.

11. Indefinite break: That s not something usually heard, especially from a sportsman at his peaking years. But Ryder is Ryder, and he decided to take sabbatical from cricket. The reason for the indefinite break was his off-form, injury concerns and the history of prolong disciplinary problems.

12. Bar incident 1: On March 28, 2013, Ryder was assaulted outside a bar in Christchurch in the early hours. He was brought to hospital in a critical condition. It was then reported that he suffered a fractured skull and a collapsed lung and was in a medically induced coma. Later in 2015, the assaulters were punished by the court of law.

13. Ryder-Anderson show: Ryder fought his way to the national side in late 2013. Though he made a duck on his comeback game on Boxing Day, he made his New Year special against West Indies at the picturesque Queenstown. On January 1, 2014, Corey Anderson scored the then fastest ODI hundred off 36-balls. He was involved in a 191-run stand for the fourth wicket with Ryder; the runs came from just 75-balls! Ryder scored 104 from 51-balls. Ryder brought up his hundred from 46-ball and it remains seventh in the list of fastest hundreds in the ODI format.

14. Bar incident 2: Ryder was selected to play India in an ODI series in early 2014. However, he didn t get going and during this time, he was Ryder was filmed by customers in an intoxicated state along with all-rounder Jimmy Neesham outside a bar in Auckland after a dramatic tied game at Eden Park.

15. Bar incident 3: Ahead of the Test series against India that year, Ryder was named the backup of Ross Taylor for the first Test and could have played. On the eve of the Test, Ryder was seen drinking along with bowler Doug Bracewell at a bar and left the place at 2.00 am. His teammates and the board were livid over the incident. Ryder was dropped from the second Test and also the Twenty20 World Championship side that followed the next month. He didn t play for New Zealand again.

16. Fat but fit! Adam Parore once told New Zealand Herald, He s [Ryder] too fat. He s in no fit state to play for New Zealand and if I was still in the national side, I wouldn t want him in my dressing room. He claims to have lost 10 kg, in which case you can only wonder what shape he was in before that. However his weight never came in the way of him being an exceptional gully fielder. Take that for a catch!

17. Most sixes: Auckland batsman Colin Munro in March 2015, smashed the record for the most sixes (23) in a First-Class innings in his innings of 281 against Central Districts in the Plunket Shield. The previous record of 16 was held by four players Symonds, Graham Napier, Mukhtar Ali and the one and only Ryder!

18. Mr Popular a party-man: Ryder is one of the most popular cricketers in the world and Daniel Vettori once said that he was the most popular New Zealand cricketer he has seen. Partying since his troubled teens, Ryder is believed to have an extensive collection of music and is the DJ in the dressing-room.

19. Underrated bowler: Ryder is a very effective medium-pacer who is often undervalued. He has 139 wickets at 27.65 with the ball in First-Class cricket. Now, that s a brilliant bowling average for someone, who scores at almost 41 in Tests and over 45 in First-Class. Last month, Ryder took a 10-wicket haul for Essex against Glamorgan helping the side emerge victorious. Perhaps, New Zealand and Ryder, both lost on an opportunity a world-class all-rounder.

21. CPL: In 2017, Ryder received call from St Lucia Stars as a replacement for David Miller.

Anyways, any Ryder article is incomplete without this piece of swagger… 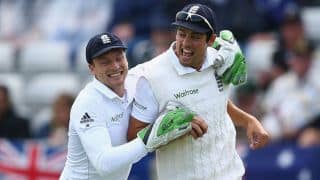