Jill and Jane Powell: Yorkshire twins who played for England

Jill and Jane Powell: Yorkshire twins who played for England

Jill and Jane Powell both went on to play Tests and ODIs for England Women, adding to the list of twins in women’s cricket.

Born January 19, 1957, Jill and Jane Powell both went on to play Tests and ODIs for England Women, adding to the list of twins in women’s cricket. Abhishek Mukherjee looks back at the twins matched by none in the history of Yorkshire.

It all started with the Shevill twins, Rene (later Rene Blade) and Fernie (later Fernie Harris), the first pair of twins to play Test cricket, albeit never together. The first Women’s Test in history featured Essie Shevill (later Essie Nann), elder sister of Rene and Fernie, alongside Fernie. Fernie did not play again, but Rene played alongside Essie in the second and third Tests. Neither sister played international cricket again.

Elizabeth ‘Liz’ and Rosemary ‘Rose’ were the first pair of twins to play a Test together, male or female, for New Zealand Women against England Women at Headingley, 1984.

Stretch beyond the Test world, and more surprises lie in store: Brazil Women have Narayana and Erika Reinehr; Argentina Women, as if to compete with their Brazilian counterparts, have Dirce and Violeta Yuli as well as Lucia and Clara Culley!

In between all this, there were Jill and Jane Powell of Sheffield, Yorkshire. Jane, of course, was the bigger name of the two, playing 6 Women’s Tests and 24 Women’s ODIs (16 as captain), while Jill played one of each. Interestingly, Jill’s career was over before Jane’s took off.

The Powells moved to the antipodes when the sisters were young, and Jill started playing serious cricket for Western Australia Women before she turned ten. On return, Jill made it to Yorkshire Women; by this time Jane had also broken into the side, and played under Jill.

It was an all-round performance against Middlesex Women that probably catapulted Jill into international cricket at 22. She bowled splendidly for 7-5-16-3 to help bowl out Middlesex for 132 (Jackie Court, by then an established Test player, scored 89 of these). Then Jill led the chase, finishing on a 34-minute 40 not out (Court took 2 wickets out of 3).

England Women had already taken a 1-0 lead when Jill made his debut in the last Test of the series. Susan Goatman and Enid Bakewell added 140 before a mini-collapse reduced England Women to 148 for 3. Jill walked out, scored 17, and helped the legendary Rachael Heyhoe-Flint add 46.

Jill also played an ODI, scoring 2 before being stumped. Bakewell top-scored (again!) with 57 as England Women finished 167 for 6. West Indies Women scraped through by 2 wickets with 2 balls to spare, though Bakewell had figures of 10-3-14-0. Jill did not play international cricket again.

As Jill returned to domestic cricket, Jane grew in stature. The sisters played for numerous teams, including one called Vagabonds Women. Led by Court and featuring the Powell twins and likes of Jacqueline Wainwright and Helen Slother, Vagabonds Women won the National Club Knockout of 1983.

Jill migrated to Western Australia, and continued to play for them after that season. Jane made her ODI debut in June 1984 against New Zealand Women, scoring 16. In her Test debut a month later she made 37 and 8.

Jane’s finest moment came during the 1986 Test at Blackpool. Sandhya Agarwal led the way with 132, and India Women declared on 426 for 9. Jane walked out after Carole Hodges and Lesley Cooke added 105 for the opening stand. She batted through, allowing her teammates to accelerate around her. When Hodges declared 74 runs behind, Jane was unbeaten on 115.

The Indians refused to take the challenge, batting on, setting England Women an unrealistic 253 in about two hours. The hosts finished on 54 for 2, Jane scoring 11 not out. It was an impressive effort, against the likes of Diana Edulji, Shanta Rangaswamy, Shashi Gupta, and Shubhangi Kulkarni.

Unfortunately, Jane never got going after that. From 6 Tests, she finished with 281 runs at 35.12. Her hundred at Blackpool remained her only score above 40.

Leading at the highest level

If the Test hundred was the Jane’s greatest achievement, the biggest honour came in 1987-88, when she led England Women to the final of World Cup 1988.

England Women started off on a high. After their Kiwi counterparts were bowled out for 186, Jane walked out to join Hodges at 25 for 1. They added 64 (Jane scored 31), setting the platform; Patsy Lovell then finished things off, and England Women won by 3 wickets.

Australia Women were a different proposition. They reached 210 before skittling out the Englishwomen for a mere 84. Batting at three, Jane was left stranded with 36.

Ireland Women turned out to be pushovers, and Jill scored 24 not out as England Women chased down 127 comfortably with 7 wickets in hand. Bowled out for 97, Netherlands Women suffered a 9-wicket defeat.

England Women started the return leg with a 15-run win over Australia Women. Ireland Women lost by 10 wickets and Netherlands Women by 180 runs. In between, they lost their return match against New Zealand Women. It did not matter, for they qualified with 6 wins (24 points) from 8 matches, behind only Australia’s 28.

Unfortunately, the final at MCG turned out to be a one-sided affair. To be fair, the English were completely unprepared for a ground that humongous. Janette Brittin (46) was the only one to get some runs, and though England Women batted out the 60 overs, they got a mere 127 for 7. The boundaries simply did not happen.

Two quick wickets reduced Australia Women to 14 for 2, but that was it: Lindsay Reeler and Denise Annetts saw the hosts through. Janie finished the tournament with 160 runs at 40.

Jane also led England Women in Women’s European Championship, 1989, one where her women triumphed easily. Against Denmark Women at Nottingham she registered her career-best of 98 not out from 103 balls. She outscored her opposition, who folded for 64. Jane’s tournament numbers read 171 runs at 86.50.

Jane did not play international cricket again. Both Jane and Jill turned out for an ‘England Women’ side against Goatacre.

Jane also became Head of Physical Education at Chase School, Malvern (Worcestershire), and Head of Coaching in England Hockey Board. 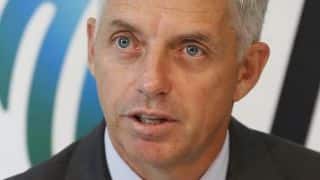 Do you think I am a homosexual? : Martin Crowe asks journalist