Their commiseration towards Rahman was laudable and will indubitably go down as one of the most memorable moments in the cricketing folklore.

Cricket has been customarily acknowledged as ‘the gentlemen’s game’ but quite habitually there have been instances, which have hampered its image. The game has turned out to be more aggressive over the years and sledging has been a norm. Despite all the murky moments, yet there are times when cricketers do show respect and share the pain of their opponent. And one such instance was observed during the first Test between Bangladesh and England at Chittagong on Monday. The match saw a dramatic end as the game went down the wire on the final day, which saw Bangladesh requiring 33 more runs to win with just two wickets in hand. England on the other hand had a task in hand as a well set Sabbir Rahman was engineering the Bangladeshi run chase and looked good to hunt down the target. FULL Cricket Scorecard: Bangladesh vs England 1st Test at Chittagong

In the morning session of Day Five, Bangladesh resumed their batting with Taijul Islam and Rahman at the crease. They came out hard and garnered 10 priceless runs in no time. But the new ball made all the difference as Ben Stokes steamed in and got the job done for England. When Bangladesh needed 23 more runs to win, Sabbir was at non-strikers end while Stokes was putting in the hard yards. He caught Taijul leg before as the review overturned Kumar Dharmasena s decision and Shafiul Islam walked in next, carrying his nation s hope. His job was simple, to survive the over and let Rahman take most of the strike, but Stokes definitely had other ideas.

Stokes has a natural tendency to get the ball move into the right-hander, a quality of which Shafiul was perhaps not aware of. The very second ball to Shafiul was pitched outside off and swung in; he didn t offer a shot as the red cherry struck his pads, further ruled it as out. Decision reviewed, with thousands of Bangladeshi hopes pinned on the big screen. Since there was no shot offered, the impact, which was outside the line was out of equation. Dharmasena got it right as the English team pushed the boat out in the Lion s den. There was jubilation in the English dugout and frustration in Bangladesh s. Sabbir at the non-striker s end was shattered and heart-broken as a victory was snatched from right under his nose and he was helpless at the other end. A Test defeat is not easy to digest, especially after being on the brink of a victory. Sabbir fought hard and had all the reasons to be upset. A win would have certainly changed a lot of things for Bangladesh cricket and Sabbir was aware what he has lost. Nevertheless, losing after putting up such a fight is never a shame instead moment to be proud of.

It was a huge moment for Bangladesh and a heart-wrenching one as many hopes were crushed and the hosts almost defeated a giant team in their own game. Rahman played valiantly for his 64 and remained unbeaten but ran out of partners. He was on the ground with a dejected look on his face, when English cricketers walked to him for consolation. Joe Root, Stuart Broad and Alastair Cook kept the spirit of the game alive sympathizing Sabbir after loss and help him feel better. This is what cricket teaches us; winning or losing is just a part of the game but playing is more important.

One shouldn t forget that things got out of control between both the teams as couple of heated moments were witnessed during the second One-Day International. There was a heated moment between Mahmudullah and English skipper Jos Buttler, which further carried on during the handshakes after the game between Jonny Bairstow, Ben Stokes and Tamim Iqbal. The incident attracted enormous attention and the fire did not extinguish here. Stokes further refused a handshake from Tamim in the tour game, which added fuel to the fire. But this gesture by Cook, Root and Broad have certainly won many hearts and testified the true spirit of the game. Their commiseration towards Sabbir was laudable and will indubitably go down as one of the most memorable moments in the cricketing folklore.

Illustrations like these have happened in the past and the most famous one being the one in the 2005 Ashes between Brett Lee and Andrew Flintoff. The episode between Dale Steyn and Grant Elliott after South Africa s World Cup semi-final loss in 2015 was also heart-wrenching for many Proteas fans. But Elliott did a good job in showing compassion to Steyn.

(Suraj Choudhari is a reporter with CricLife and CricketCountry. He is an avid follower of the game, and plays the sport at club level. He has a radical understanding about the subtle nuances and intricacies of cricket, and tries to express it through paper and pen.) 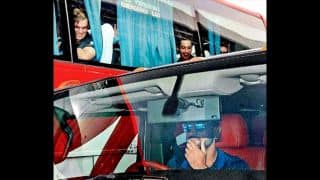