A flashback of the life of John Wisden, the founder of cricket's most well-known reference book.

John Wisden, born September 5, 1826, was more than the man behind the Bible of cricket. He was a fantastic quick bowler and a leading all-rounder of his day. Arunabha Sengupta looks back at the life and career of the man who is synonymous with the last word in cricket.

More than just the name

His name is stamped on almost all that we know about the history of the game. However, he was more than just a publisher of the ultimate reference book on cricket.

John Wisden stood just five feet six inches, and weighed around 44 kilograms. Yet, he became one of the best fast bowlers of his era, running in with a relaxed action followed by very accurate deliveries. He was a good batsman as well, who played with an extremely straight bat.

According to Fuller Pilch, the leading batsman of that era, Wisden was the finest of all-rounders. At Lord’s in 1850, playing for North versus South, he claimed all 10 wickets in the second innings, each and every one of them clean bowled (a feat that has no parallel in First-Class cricket)!

As is well known, what he did after leaving the game makes his name immortal. In 1864, after rheumatism had forced an early retirement from cricket, Wisden launched the Cricketer’s Almanac that bore his name. With time, the yellow covered annual volumes became the veritable Bible of cricket, the refuge of scholars and historians associated with the game.

Wisden was born in Crown Street, in the seaside town of Brighton, Sussex. His father, a builder, passed away when he was just a boy. At that time Wisden was attending the Middle Street School. After his father’s untimely death, he moved to London, taking up residence with the Sussex wicketkeeper Tom Box.

It was Box’s influence that saw him take to the sport. By the time he was 18, he hardly looked more than a boy but was already making his debut for Sussex against Kent. The success was instantaneous. The wisp of a lad ran in and bowled round arm, generating surprising pace. Six wickets resulted in the first innings and three in the second — the second essay earning him the prize scalp of Nicholas Felix.

The following match was against MCC and Wisden took six wickets in all, including the great Alfred Mynn in the second innings. His small physical stature combined with the surprising success led his fellow cricketers to name him ‘Little Wonder’ after the winner of the Epsom Derby of 1840.

His place was thus cemented with these excellent performances, but Wisden did not restrict himself to playing for Sussex.  In 1846, he joined William Clarke’s All England Eleven. The alliance was more than just cricketing. The great Nottinghamshire batsman George Parr was  Clarke’s lieutenant and later took over as captain of the All England Eleven after the death of the founder. In 1849, Wisden got engaged to Anne, Parr’s sister. However, tragically, Anne died before the scheduled wedding and Wisden remained a lifelong bachelor.

Whether he was spurred on by love or not is debatable, but 1849 saw Wisden score a fluent 100 against Kent at Tunbridge Wells. Centuries in those ball dominated days were rare, and Wisden knew it more than anyone else. He himself averaged around 10 wickets per match with his round arm pace.

Ten out of ten

He did better in 1850, when the North of England, came down to take on the South in a contest between the best players of the country.

Wisden, born in Sussex, should have been playing for the South. But he cast his lot with the Northerners, teaming up with Clarke and Parr. The South had their own heavyweights. Mynn, Felix, John Lillywhite and Billy Caffyn made a formidable line up.

Who won the toss is a snippet of history buried in the sands of time, but South batted first. Soon, John Wisden with his round arm fast bowling and William Clarke’s under-arm leg spin created havoc. No one reached double figures, Caffyn came closest with nine. The South were bowled out for 36, with Wisden taking three wickets and Clarke six.

Thomas Sherman of Surrey hit back for South. Parr made a quick 17, but soon the North were 8 down for 53. Now Wisden and Lord Guernsey shared an excellent partnership. The exact number of runs they put on has again been lost with some page of history gone missing. But Wisden scored 22, Guernsey remained unbeaten on 27 and, with 14 byes and five leg byes boosting the total, the South ended with 131.

The rest of the match was all Wisden. He ran in ball after ball and kept hitting the stumps of the South batsmen. Caffyn batted well again for 24. Mynn, who had fallen to Wisden in the first innings, remained unbeaten on 17. But Wisden struck timber 10 times. North were literally bowled out for 76. The three day game ended before stumps were drawn on the first evening. As many as 25 of the 30 wickets to fall were bowled. There were three run outs as well, making it 28 strikes on the wickets.

There have been 79 instances of a bowler taking all ten wickets in a First-Class match, apart from three more in 12-a-side games. The first of these had taken place just two years before Wisden’s haul, when the Kent left arm round-arm bowler Edmund Hinkly had blasted out ten batsmen of England in 1848. Hinkly’s feat and Wisden’s subsequent ten wicket haul remain the only ones without fully available bowling analysis.

Among the others, Hedley Verity leads the way with 10 for 10 for Yorkshire against Nottinghamshire in 1932. Wisden remains the only bowler to have got all his wickets by knocking over the stumps. Only Eric Hollies, who took 10 for 46 for Warwickshire against Nottinghamshire in 1946, managed to capture all ten without the help of teammates, with seven bowled and three leg-before.

Jim Laker in 1956 and Anil Kumble in 1998-99 performed the feat in Test cricket. The last person to achieve thisin the First-Class game was the Warriors seamer Mario Olivier who took all ten against the Eagles at Bloemfontein in December 2007. Tich Freeman managed it three times for Kent in successive seasons — 1929, 1930 and 1931. Vyell Edward Walker, Verity and Laker are the only other bowlers to have achieved this twice.

In 1852, the man from Brighton switched allegiance to the United England Eleven, becoming the joint secretary with James Dean.At the same time he continued to represent Sussex with phenomenal success. In 1855, the summer in England saw just one century, and it was a magnificent 148 scored by Wisden against Yorkshire.

By this time, Wisden was also heavily into cricket centred business. His first venture was manufacturing cricket equipment at Lemington Spa in 1850. He spent three years from 1852 as the cricket coach at the Harrow Public School. Later, in 1855, he teamed up with Fred Lilywhite to set up a cricket and cigar shop near Haymarket in London. The shop ran for three years. And like many other cricketers of his day, he also owned a pub — The Cricketersat Duncton in Sussex.

In 1859, Wisden teamed up with George Parr to recruit an England team to play in Canada and United States. The side played matches in Montreal, Hoboken, Philadelphia, Hamilton and Rochester. By then Wisden’s pace had slowed considerably, but he still remained the best bowler in the country — sending down medium pace and also some underarm slows with canny cricketing sense.

When he moved away from the cricketing scene in 1863, it was due to rheumatism aided by a sprain he had picked up while playing racquets. By then he had captured 1109 wickets at 10.32 and scored 4140 runs at 14.12 in First-Class cricket. The batting average, let us underline, was excellent for those days.

In the initial days he was known for his ‘very fast and ripping deliveries’. But, there was no intimidation about him. He was noted for his genial outlook even as he played his game with a keen sense of purpose and indefatigable stamina. As a batsman he was correct, patient and his bat, as has been mentioned, was straight enough to make Euclid proud.

The publisher and businessman

Still a moderately young man at 37, Wisden turned manufacturing and selling sports equipment, and, significantly, turned his hand to publishing as well. The first of his annual Cricketers Almanac was published in 1864. It was a  slim 112-page book, detailing the 1863 cricket season, with the remaining space listing canals and English Derby winners. The inaugural edition sells for whopping fortunes today.

There were several similar publications at that time, but Wisden left the others behind with scrupulously accurate statistics and proud editorial independence. It remains the one stop shop for most cricketing facts, the final word in any fact based argument.

Wisden also published a book on Cricket and How to Play it in 1866. In 1870, the shop at Coventry became John Wisden and Co, and from 1872, Wisden operated his sports goods shop from 21, Cranbourn Street near Leicester Square.

The pioneering cricket chronicler passed away in 1884 from cancer.

According to their brochure, the firm of John Wisden and co. continued to produce equipment for athletics, badminton, basketball, baseball, boxing, bandy-sticks, cricket, croquet, fives, football, golf, hockey, lawn tennis, lawn bowls, lacrosse, netball, polo, quoits, racquets, squash racquets, stoolball, table tennis and water polo. It is not known which of these sports were favoured by King George V, but in 1912, John Wisden and Co became the ‘Athletic Outfitters to the King.’

The Wisden Almanac has come out every year since 1864, in its trademark yellow cover. And that includes the years ravaged by World Wars.

In 1913, to mark the 50th edition of Wisden, the regular feature of Wisden Cricketers of the Year was abandoned. Only one Wisden cricketer was chosen for that particular year — John Wisden himself. 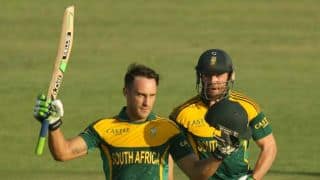