Despite having a long list of support staff and some glamorous players, Mumbai Indians kept failing in their quest to win the Indian Premier League (IPL) title. The arrival of John Wright as the head coach of the franchisee brought about a dramatic change as Mumbai Indians not only won the IPL but also the 2013 Champions League. Sudatta Mukherjee looks at the contribution of a coach who prefers to stay in the background and allow the results to speak for itself. Despite having a long list of support staff and some glamorous players, Mumbai Indians kept failing in their quest to win the Indian Premier League (IPL) title. The arrival of John Wright as the head coach of the franchisee brought about a dramatic change as Mumbai Indians not only won the IPL but also the 2013 Champions League. Sudatta Mukherjee looks at the contribution of a coach who prefers to stay in the background and allow the results to speak for itself.

When John Wright was appointed coach of the Indian team, ignoramuses wondered: “What can a New Zealander with a Test average of 37 teach a legend like Sachin Tendulkar?” By that token Duncan Fletcher (six One-Day Internationals and no Test appearances) and John Buchanan (just seven First-Class outings) or Dav Whatmore (seven Tests and a single ODI outing) should never have come anywhere near coaching. Yet, Fletcher, Buchanan and Whatmore have been among cricket’s most successful and respected coaches.

It’s not about how many Tests and ODIs the coach has played. It’s about a discerning eye, the stuff inside the cranium, the ability to strategize and the skill to man-manage — not just the players but the varying egos of the players.

In 2003, John Wright masterminded the Sourav Ganguly-led Indian team to the final of the World Cup. Two years later, he bid farewell to Team India. But the man had done enough to gain immense respect as a coach. He never tried to be bigger than the players. He was mild, but behind the weather-beaten, salt and pepper handsome visage was a man who was tough without being officious and overbearing.  If he could coach the Indian players — easily the most pampered bunch in international cricket — and get the best out of them, then it was a no-brainer that he would be a sought after man by other international teams once his tenure with India was over.

In 2010, he took over as New Zealand’s coach. And despite lacking adequate preparations, he guided the Kiwis to semifinal of the ICC 2011 World Cup.

Fast forward to 2013. Mumbai Indians (MI) needed someone who could help them break the jinx of not winning the IPL. It came as no surprise to anybody when MI roped in Wright as the head coach after experimenting with Lalchand Rajput — coach of India’s maiden World T20 win, Shaun Pollock and Robin Singh in the previous editions.

When Wright first arrived in India, he was faced with the challenge of maintaining the balance between skill and fitness. As Jaideep Vaidya wrote sometime back in this very website, “When it came to batting practice, the challenge was getting them to stop; with physical fitness, it was getting them started.”

Wright laid down the “non-negotiables” to the team: punctuality, honesty and intensity. “The rules were simple and clear; they applied to everyone from the global superstar to the teenaged debutant, and could be understood and adhered to by a graduate or a dropout.”

Wright encouraged the lads to be honest, open and upfront. “I wasn’t backward in letting them know what I thought of their performances, and I had no problem with them doing the same to me.”

In the MI set-up, the situation was slightly altered. He not only had to work with senior cricketers like Sachin Tendulkar, Ricky Ponting and Harbhajan Singh, but also exuberant young players who brought freshness in the field. Players like Ambati Rayudu, Rohit Sharma, Aditya Tare gave the side the aggressiveness. Wright had to merge the cultural, national and international barriers to yield a perfect blend of teamwork. And unlike working with national teams, working for a franchisee was a completely different cup of tea. He was highly paid and had to be accountable — almost every single day. And it wouldn’t have been easy for him as a coach – for that matter any coach in the IPL — to explain to team owners who just did not have the cricketing IQ [intelligent quotient] to appreciate the moves, game plans and decisions.

With the assistance of a strong support staff,  that had the likes of Anil Kumble and Jonty Rhodes,
Wright did a marvelous job — and in quick time. 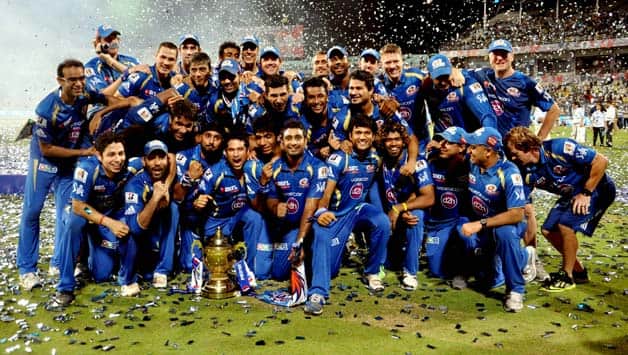 Mumbai Indians with the Indian Premier League 2013 trophy. Coach John Wright is standing in the extreme right in the last row © IANS

On May 26, 2013, Mumbai Indians lifted the IPL Trophy at the Eden Gardens — Sachin Tendulkar farewell game in IPL. “It is an amazing feeling. It is unbelievable! It is the big league, and there are tough games in it. I always wanted to come here and experience it as a coach. I am just thrilled for the franchise and everyone involved. I am so thrilled for the boys. They have worked very hard. We have tried to create an environment, so they can go out and express themselves and fight hard. We have played well as a team and have really come together, particularly in our fielding and our bowling,” Wright on the tournament’s official website.

The 2013 Champions League opening match and the final were all about two legends — Tendulkar and Rahul Dravid. Wright has always expressed his utmost admiration for Tendulkar – someone whom he has played with. When he took over as MI coach, Wright said: “I hope he [Tendulkar] really enjoys the time with the new people in the management. I just want him to enjoy his cricket and have fun playing. I think it’s important that we celebrate the way Sachin has played his cricket and I know that Mumbai loves him. I will be encouraging him to go out there and have fun, express himself. I’m just looking forward to watching him bat for as many overs as he can bat.”

After winning the IPL and Champions League T20 (for the second time), it came as no surprise to hear Tendulkar say that “all my dreams have been accomplished”. Tendulkar will be the first to acknowledge that Wright had a part to play in making those dreams a reality.

Sir Alex Ferguson had once said, “From the moment I got to Manchester United, I thought of only one thing: building a football club. I wanted to build right from the bottom. That was in order to create fluency and a continuity of supply to the first team. With this approach, the players all grow up together, producing a bond that, in turn, creates a spirit.”

There were shades of Sir Alex when Wright said soon after joining MI: “I coach the way I coach. I’m a bit older and perhaps, a bit wiser. It’s a different sort of game and I think coaching is all about creating a management group that allows and encourages the team to play without fear; to create a tough team that doesn’t have any fear of failure. A team that fights hard, works hard and prepares well. It’s just a matter of being together and working towards the common goal of winning. We’re very happy with the players we’ve signed. We have a great mix of some really exciting players who know how to win.”

Wright dared to rebuild his team, without controlling the players. Tare summed up Wright perfectly: “Soft-spoken, but not soft.”

Sourav Ganguly is not an easy person to handle, as Greg Chappell will vouch. But Wright handled him beautifully. As he said on taking over as coach of the Indian team, “My relationship with Sourav [Ganguly] was obviously going to be critical. I thought I could help him tactically, but I began with the basics, suggesting that he get a new watch as it was important the captain was on time. I talked about setting an example and the importance of body language and how those sorts of things were more pertinent to leadership on and off the field than what you said. We came from different backgrounds, but had plenty in common. We were both ambitious and desperately keen to succeed in our respective roles; to do that we’d need each other’s help. And our destinies are linked: we’d sink or swim together.” The IPL and Champions League triumph are more feathers in Wright’s crowded cap. Indeed, he has been Mr Right for Mumbai Indians.