March 25, 1889. Johnny Briggs claimed an incredible 15 wickets for just 28 runs against South Africa at Cape Town, of which all but one were bowled. Arunabha Sengupta looks back at the historic tour and the amazing feat notched up by the Lancashire spinner.

It is rather incredible when one reflects that Johnny Briggs got his Lancashire contract mainly due to his fielding at cover. According to Wisden: “In those early days he was played chiefly for his fielding, his quickness and energy making him from the first a special favourite with the crowds at Old Trafford.”

It is even more surprising that he did not get a bowl in his first Test. When he did so in his second, it was a measly 8 overs as the seventh bowler tried out, and he did not take a wicket. And then he did not bowl again until his seventh Test.

Briggs toured Australia as a middle-order batsman who was also an electric cover fielder. Yes, he could be a batsman of fluctuating substance and curious style. As Abhishek Mukherjee observed, “Briggs could take on any bowling on his day. He batted with panache, often playing the most outrageous strokes (which turned to be too outrageous at times, quite frequently leading to his downfall)”.

However, when he eventually did bowl in the Lord’s Test in 1886, he captured 11 Australian wickets for 74 runs.

By the time he arrived in South Africa on England’s first official tour of the country, he was acknowledged as the best left-arm slow bowler of England.

The side was led by Charles Aubrey Smith, who later graced the silver screen as a character actor in Hollywood. The tour itself was not supposed to feature Tests. It took place more as a result of a personal venture by an army officer named Gardner Warton.

Warton, while based in the Cape from 1883 as a captain of the army, had been a member of the Western Province Cricket Club led by William Milton. By 1888, he had made his way up the ranks to a major and moved back to England. There he made arrangements for a side of English cricketers to tour the country.

The team, whose name has been documented in record books as Major Warton’s XI, set sail on SS Garth Castle in late November, 1888. The side carried with them a prize — a cup donated by the ship’s owner Sir Donald Currie, to be presented to the local team which “excelled the most against the visitors.” This was the origin of the Currie Cup that would go onto establish itself as South Africa’s major domestic tournament.

Aubrey Smith’s side was not a full strength English team by any means. Sir Aubrey, as he later became, himself did not win more than the solitary Test cap on the tour. Charles Coventry, Basil Grieve and Emile McMaster were three other men, amateurs all, who would play the Tests and that would constitute their entire First-Class careers.

The English team actually started with a loss. Of course it was an odds match with 22 men turning out for Western Province. However, given the relative experience and strength of the sides, it had been expected to be a cakewalk for the visitors. However, the batsmen needed a while to settle down on the matting wickets, and Western Province won by 17 runs. In fact, the visitors lost 4 of the first 6 matches.

If the pitches were not matting, they were made of clay with abundant quantities of salt sprinkled on them to absorb the moisture. The England batsmen struggled in such conditions, and the bowlers could not really make out how to get the wickets. According to Wisden, a lot of the poor performance also had to do with the lavish hospitality. Some of the banquets — such as one in Kimberley — went on too long to allow players to catch a wink before journeying to the match in the morning.

However, just as the local press started harping on the ineptness of the visitors, the team started winning. From late January they won almost everything in sight, and by huge margins. When the Grahamstown 22 was defeated by an innings and 54 runs, Briggs gave an indication of things to come with figures of 39.1-24-39-8 and 29-15-36-14. A haul of 22 for 60 was mind-boggling, whatever be the quality of the opposition.

Finally, on March 12 at the St George’s Park in Port Elizabeth, a match was organised to meet the visitors on as equal a footing as was possible by the local men. It was made an even-side game on demand, and eleven men led by Owen Dunnell took on Aubrey Smith’s troupe in a three-day encounter. It was billed as Major Warton’s XI vs South Africa XI, but later went down as the first ever Test played by South Africa. Even Wisden acknowledged it grudgingly, writing, “It was never intended, or considered necessary, to take out a representative English team for a first trip to the Cape.”

The match was played on a green matting wicket, and South Africa took first strike. A crowd of around 3,000 men gathered to watch the proceedings. And Briggs, by then the most renowned of the England bowlers, opened the attack and skittled the top order, taking four for 39. The captain himself, with his curious run up that dubbed him ‘Round the Corner Smith”, destroyed the rest of the batting. The home side was bowled out for 84.

England did not do much better, but 46 by Bobby Abel from the top of the order and 32 by Arnold Fothergill from No. 11 carried them to a lead of 64. Fothergill followed it up with 4 wickets to restrict the home side to 129 in the second innings, and England triumphed by 8 wickets within two days.

The game now acknowledged as the second Test, was played from March 25 at Cape Town. Unfortunately, at Johannesburg the captain went down with enteric fever, and Monty Bowden of Surrey led the side.

That peerless professional Bobby Abel was once again among runs, scoring 120 as the hosts batted almost all through the first day to compile 292. Gobo Ashley, left-arm medium pacer from Cape Colony, played his only Test and captured 7 wickets.

By the end of the first day, Fothergill had already made a dent into the South African batting and the hosts retired at 2 for 1.

“In those early days he was played chiefly for his fielding, his quickness and energy making him from the first a special favourite with the crowds at Old Trafford”

The next day was a blur of incoming and departing batsmen with the constant fixture of Briggs at the bowler’s end. Briggs had by now perfected his art of bowling on a matting wicket and the home batsmen had no answer to his gripping, shooting and sometimes climbing deliveries that turned away from them. Only Bernard Tancred managed to put bat to ball often enough to score 26. No, the South Africans were not good enough even to snick Briggs. Nicholas Theunissen was leg-before. The rest of the batsmen were bowled. Briggs ended with figures of 19.1-11-17-7 as the home side was demolished for 47.

George Ulyett had opened the bowling in the first knock along with Fothergill. However, in the second innings, Bowden did not think twice before offering the new ball to Briggs. The first dismissal was run-out, with just 1 on the board. The next 9 followed one after the other, all castled, eight to the Lancashire spinner one to Fothergill. The hosts lasted for just 28.2 four-ball overs. Briggs ended with 14.2-5-11-8. The match haul of 15 for 28 remains the most devastating figures ever.

Down the years many have taken more wickets in a match. Muttiah Muralitharan, Bob Massie and Narendra Hirwani have captured 16, Sydney Barnes 17 and Jim Laker 19. But, never has anyone taken as many for such paltry a total of runs. Seven years later, Surrey champion George Lohmann captured 15 wickets against the same opponents at Port Elizabeth. But he gave away 45 runs. Briggs’ feat remains unmatched.

The squad returned on board the SS Garth Castle. However, the men who had led England in the two Tests, Aubrey Smith and Bowden, stayed back and set up a stock broking firm in Johannesburg. In that city, Aubrey Smith appeared on stage for the first time before crossing the ocean to make a name for himself in Hollywood.

Bowden and Smith both represented Transvaal in domestic cricket. In the first Currie Cup match, Bowden scored 63 and 126 not out against Kimberley, playing as a wicketkeeper-batsman. Aubrey Smith led the Transvaal side in the game and picked up 7 wickets.

A few days after the match, Bowden travelled north to Rhodesia and settled there. He died in February 1892, at the Umtali Hospital — an establishment little more than a glorified mud hut. His body had to be protected from marauding lions before it was buried in a coffin made from whisky cases. 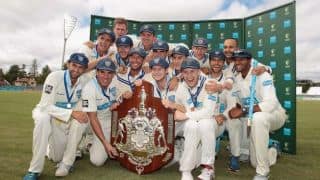