Jonny Bairstow has had a stunning start to the 2016 season. He has been tremendous form for Yorkshire, and has now carried on his form into the first Test against Sri Lanka, where he scored an aggressive 140. England were in a spot of bother when Bairstow came on to bat. England had lost half their side for just 83. He found a determined partner in Alex Hales. Hales was a bit shaky during the South Africa series (though he scored 60 at Newlands), but the fact that he was given a place in this match shows that the England selectors had faith in him. But their 141-run stand for the sixth wicket was all about Bairstow’s dominance. LIVE CRICKET SCORECARD: England  vs  Sri Lanka First Test at Headingley, Leeds

Bairstow played a counterattacking innings. Another wicket at that stage and England could have been bowled out for under 120. But not only did he hang on, but scored runs at a brisk pace, putting pressure back on Sri Lanka. But Bairstow was in scintillating form ahead of the series.

Bairstow has amassed 533 runs in six innings at 88.83, including a couple of tons. What is more staggering is he has scored them at a strike rate of 88.39. Bairstow bats at No. 5 at Yorkshire, but is no stranger in bailing his side out of trouble. He scored his highest First-Class score of 246 recently against Hampshire, when his team were 46 for 3. He scored 246 off just 270 balls and out on 205 for the fourth wicket with Adam Lyth. Live Updates: England (ENG) vs Sri Lanka (SL) 2016 Live Cricket Score, Day 2

Bairstow did himself a world of good with an unbeaten 150 in the Cape Town Test. But his innings was overshadowed by Ben Stokes’ 258.  But it was a match where England were slightly on the backfoot. Barring James Taylor, England’s top-order had gotten themselves on to good starts, but nobody converted. Walking in at No. 7, Bairstow took the attack to the opposition once again, and almost matched Stokes shot for shot. They built a 299-run stand in no time, and England managed to put 629 runs on the board.

Bairstow could be the man for England, especially when they are staring down the barrel. He has on more than one occasion dug his team — England and Yorkshire — out of trouble.  If he can carry his form on, he can be a threat to all teams after an on and off Test career. He can once and for all cement his place in the side — more so because he doubles up as wicketkeeper. 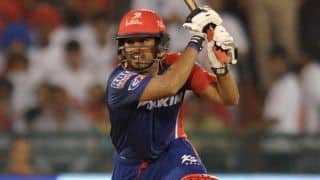