Born September 8, 1990, Joseph Charles Buttler, widely reckoned as Jos Buttler is an English cricketer, a right-handed batsman and a wicketkeeper.

Born September 8, 1990, Joseph Charles Buttler, widely reckoned as Jos Buttler is an English cricketer, a right-handed batsman and a wicketkeeper. Buttler is one of the most potent young guns in the English circuit and known for his manic approach in the middle-order. Buttler typifies modern arena of cricket, and has played a pivotal role in rejuvenating England s shorter formats fortunes. His canny improvisations and belligerent approach helped him scale newer heights but his run in whites has not been equally influential after a promising start. His batting is based on sound technique of timing and aggressive hitting along with ability to pick gaps. On his birthday, Suraj Choudhari walks down the memory lane and garners 25 lesser-known facts about the eccentric English superstar who can create wonders on the greens.

1. Impactful Test debut: Buttler made his debut in whites against India in the third Test of the Pataudi Trophy at Southampton in July 2014. He made his presence felt in his debut Test by smashing a brisk 85 in the first innings. Buttler walked in to bat when England were 420 for the loss of five wickets. All they needed was some quick runs to put Indian under the barrel. Buttler fired with all guns and and made 85 off just 83 deliveries, which contained nine fours and three maximums. His innings helped England post 569 and steered them in a commanding position. He also had scalps to his name in the Test behind the stumps.

2. Disheartening ODI debut: Buttler made it to the ODI side after a series of consistent performances. In the fourth ODI against Pakistan at Dubai International Stadium on February 21, 2012, Buttler walked out to bat for the first time in an ODI and had huge expectations on his shoulders bit it wasn t to be. Buttler was dismissed for a duck by Saeed Ajmal but England won the game convincingly by four wickets.

3. Prolific at junior level: Buttler featured for Somerset’s youth teams at the Under-13, Under-15 and Under-17 levels. His consistency at these levels made his presence unavoidable.

4. Replaced Justin Langer: Buttler made his First-Class debut against Lancashire at Taunton in 2009 when Justin Langer suffered a mistimed injury and had to be replaced.

5. Awards at a tender age: Buttler was awarded the Young Wisden School Cricketer of the Year in 2010 and made way for his T20I debut against India in August 2011.

7. Mindboggling? Buttler has four ODI tons to his name, which came against Sri Lanka, New Zealand, Pakistan and South Africa respectively. All these centuries were smashed a blistering strike rate but interestingly, the slowest out of these came against South Africa off 73 deliveries. The stat will leave one at sixes and sevens and is a testament to Buttler s potency.

8. Record: In late 2015, Buttler came out all guns blazing in the fourth ODI against Pakistan at Dubai International Stadium and went on to script history with his aggressive approach. Buttler plundered a 46-balls ton, which is also the fastest ODI hundred for England. His innings was a fine display of valiant batting as he smashed 10 boundaries and eight maximums. Buttler walked out to bat at four when Jason Roy was dismissed for a well played 102. Buttler had less that 15 overs to play but he didn t take any time to get the things going. England posted a mammoth total of 355 and won the game by 84 runs.

10. Salary: As per England & Wales Cricket Board’s central contract, Buttler s annual wage is reported to be around 350,000. Buttler was a part of Mumbai Indians that won the IPL title in 2017. He played a few very good knocks and was not available for the final due to national duties. However, his celebration post England’s win became an instant hit!

11. More talented than Ian Botham: Buttler was a consistent performer at the school level and looked promising. At the age of 14, his ability to garner runs was spotted and he also enhanced his technique and rectified his flaws. By the age of 16, Buttler averaged 95 for King s and his coach, Dennis Breakwell, the former Northamptonshire and Somerset slow left-armer, considered him more talented than legendary cricketer Ian Botham with the bat.

12. Second most expensive over in T20Is: In the third T20I against South Africa at Edgbaston in September 2012, Buttler collected some crucial runs in the last few overs. In a rail curtailed game, which was being played of 11 overs, Buttler went on to score 32 runs off 10 deliveries. The tenth over of the game saw 32 runs being scored off Wayne Parnell. Buttler smashed three sixes and couple of boundaries to record the second most expensive over in Twenty20 International 32 runs. Yuvraj Singh, who smashed six sixes off a Stuart Broad over continues to top the list.England won the game by 28 runs.

14. Tedious practice as a keeper: Buttler spoke about his hectic and taxing practice sessions as a wicketkeeper. He was quoted in a report from telegraph.co.uk saying, Sprint speed and quick reactions are really important for wicketkeepers so we train with vests that have bungee cords attached to them. You have to run quickly against the resistance so it s a good way to increase power.

15. Appetite before the game: Buttler opened up on his meal before the game. He said, For breakfast before a match I normally eat porridge with banana, blueberries and honey which sets me up nicely for the day ahead. I might have some salmon and scrambled eggs too. On the night before a game I like to have some form of pasta like spaghetti bolognese. I also quite like a steak – I m not sure it s the best option before a game but the protein must be good for muscle recovery anyway. I m average in the kitchen. I can follow a recipe and I could make you breakfast, a curry or a stir fry but that s it.

16. Eyeing Test comeback: Buttler s mere runs column saw him being axed from the Test side and is now drilling hard to regain his spot in whites. He played the Test series in India in 2016-17 as a batsman but did not contribute enough.

17. Inspiration: Every star or a budding talent has an inspiration during his playing days, and Buttler s motivations were Adam Gilchrist and Jonty Rhodes. In an interview with kookaburra.biz, Buttler was quoted saying, Adam Glichrist was an obvious one as a wicket-keeper/batsman and I really liked Jonty Rhodes as well as a kid. I like the way he threw himself around in the field and the way he played.

18. Hardest bowler to keep wickets: Many wicketkeepers face issues while keeping for a particular bowler and one such bowler for Buttler was Mark Wood. In an interview with kookaburra.biz, Buttler said, Mark Wood is quite tricky to keep wicket to because he s one of the fastest bowlers but he’s also quite short and skiddy so you have to stand very close and he makes it swing after it comes past the bat. You have to be on your toes when he s bowling.

19. Postman: If cricket would not have been his career, Buttler would have certainly opted take the career of a postman and prefer to play golf in the evening. In an interview with kookaburra.biz, Buttler said, I d like to be a postman. I could deliver the letters in the morning and then play golf in the afternoon!

20. Memorable day: On his most memorable day in his cricketing career, Buttler said in the same interview: Maybe scoring my first hundred for Somerset Under 12s against Gloucester U12s at Glastonbury. My dad said he d give me 100 when I got my first hundred so I remember looking over at him with a big grin thinking I was going to be rich.

21. Love for Indian food: People across the globe love Indian foods and are a huge fan of it. Buttler is a big fan of Asian food and while in India, he likes to have the odd curry. He also has a soft spot for chocolates.

23. Favourite venue: Every cricketer enjoys playing at a particular venue and for Buttler his favourite ground turns out to be the Trent Bridge and The Oval. In an interview Buttler once reasoned out, ” The Oval has always seemed to have memories of great matches and Trent Bridge is a nice ground with a great wicket so I ve got good memories there too.

24. England captain: Buttler is the vice-captain of England’s limited overs. When Eoin Morgan pulled out of the Bangladesh tour of 2015 citing security issues. Buttler led England to a 2-1 series ODI win in Bangladesh. It was a big achievement considering Bangladesh’s recent dominance at home where they sides like Pakistan, India and South Africa in ODIs.

25. When Aravinda de Silva made Buttler cry: Buttler was in the audience in the famous Taunton match of 1999 World Cup where Sourav Ganguly slammed 183 and shared the then record ODI partnership with Rahul Dravid. Buttler recalled an incident from the match recently.

I went to watch India against Sri Lanka at Taunton in a World Cup game, and Ganguly got 183 I think and Dravid got about 150 [145]. Taunton was Somerset my home. Watching these guys play against [Muttiah] Muralitharan and smashing him out of the ground into the river that was probably my earliest fanboy moments of cricket, watching those guys. I used to try and get everyone s autographs; You can run around the boundary and get autographs. I remember Aravinda de Silva, I was trying to get his autograph and then something must have happened. He took my pen, he had signed, and then he must have got moved or something, so he ran off. And he ran off with my pen. And I remember running back to my mum crying that Aravinda de Silva had stolen my pen, Buttler said 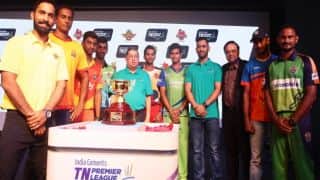