New Zealand and Australia continued to have controversies hitting them as Josh Hazlewood was caught using profane words for the third umpire on stump microphone.

The New Zealand vs Australia series continued to have controversies hitting them as Josh Hazlewood was caught using profane words for the third umpire on stump microphone during the fourth day’s play in the second Test at Christchurch. Hazlewood, evidently frustrated after a wicketless first session, lost his composure when a decision was turned down by the television umpire, and used words which he should not have. The incident died down sometime later, and Hazlewood admitted he was guilty for losing his cool, but the whole episode left another bad impression of the Australians who are known for their snobbish attitude on the field. The matter will die down in sometime, but it serves an important lesson for the Australians. FULL CRICKET SCORECARD: New Zealand vs Australia 2015-16, 2nd Test at Christchurch

Australia’s cricketing principle focuses on ‘good, hard cricket’, but nowhere it has any room for cuss words to be used by cricketers. Regular on-field spats, getting under the skin of the opposition and using words that should stay outside of the cricket field are not new to Australians. The incident that occurred on Tuesday certainly gets added in the list that Australia would not like to see. ALSO READ: Josh Hazlewood fined 15 per cent of match fees for yelling profane words during New Zealand vs Australia, 2nd Test Day 4

In the heat of the moment, Australia lost their composure and looked in sheer disbelief after the ground as well as the third umpire got their decisions right. Steven Smith and company could not believe how it was not out, and they were so assured of the wicket that they did not even check the big screen at the Hagley Oval to understand the ball had actually hit the bottom of the bat. ALSO READ: Josh Hazlewood pleads guilty after using profane words for 3rd umpire during final Test vs New Zealand

In hindsight, keeping the situation in the mind, Hazlewood can be excused for his outburst. He and Australia were trying really hard to make a breakthrough, which was denied to them by the pair of Kane Williamson and Corey Anderson. Williamson’s wicket was always going to be the most important one in the limited batting that New Zealand were left with, as they had lost the chunk on the third day evening.

It all boils down to the fact whether the young side under Smith and David Warner wants to actually focus on ‘good, hard cricket’ rather than carrying the unwanted legacy of being termed snobbish. Unfortunately, the recent incidences, like the one including Matthew Wade and Grant Elliott, do not suggest so.

Perhaps a calmer approach in the middle might have served Australia well. It was not the third umpire’s fault if they forgot to see the Hot Spot on Kane Williamson’s bat on the big screen. The Australian side under Smith is well on its way to become world No. 1 and stay there for a while, and it will not be exaggerating to say the cricketing world would not want to see the leaders of the table fighting on the field like school kids. 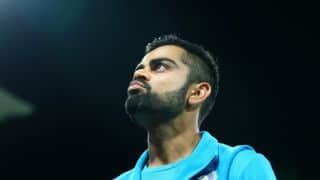