Stressed out after a wicket-less session, Hazlewood went on to over react when the third umpire ignored their appeal of leg before wicket during the fourth day of the ongoing second Test against New Zealand.

Josh Hazlewood, who is hardly a year old in Test cricket, has been handling the big responsibility of playing Australia’s spearhead bowler in the absence of experienced duo — Mitchell Starc and Peter Siddle. Stressed out after a wicketless session, Hazlewood went on to overreact when the third umpire ignored their appeal of leg before wicket during the fourth day of the ongoing second Test against New Zealand. “Who the f**k is the third umpire?,” an exhausted Hazlewood blurted out loud but not loud enough for the crowd or even fielders away from the stump microphone to hear those words. Sakshi Gupta writes that a fifteen per cent fine of the match fees was just harsh on International Cricket Council (ICC). FULL CRICKET SCORECARD: New Zealand vs Australia 2015-16, 2nd Test at Christchurch

Have we ever come across any controversy revolving around Hazlewood before this match? The 25-year-old pacer has been one of the calmest and composed cricketers of Australia, who have seen their players like David Warner and Steven Smith crossing lines in terms of behaviour on-field. Hazlewood’s condition during those overs explains the reason behind that outburst. The Australian became the victim of the moment after he went wicketless for almost 14 overs, despite being very economical and the one drop catch and one narrowly missing the bat in a span of few overs added to his frustration. Both the times, it was Kane Williamson who gained a life.

Peter Nevill dropped Williamson’s catch in the 67th over. The drop might have annoyed Hazlewood, because the wicketkeeper did not make the best effort when he dived to his left. An excellent inswinger from Hazlewood kissed Williamson’s pads before going into the gloves of Nevill. By the time the LBW moment came, the young Hazlewood was enough baffled. However, the point to be noted is, his outburst was never aimed directly to either umpire. He just shouted those words and went to continue with the game.

Hazlewood found support from former teammate and Australia’s most controversial and aggressive pacer Mitchell Johnson: “Maybe fans/supporters who go to the games and swear/abuse at players should be fined on the spot?! Just a question #notcondoningabuse,” Johnson tweeted after the end of Day Four’s play. Is it not unfair when the crowd have the freedom to express their emotions and the players cannot, especially when the latter are more with emotions inside them during the play that could set the result of the match?

There have been many occasions when players use unacceptable language one-on-one and go escape without any action because the stump microphone is nowhere close to them. A recent one was Virat Kohli’s send-off to Australian skipper Smith during an ODI when India toured Down Under in 2015. Kohli’s on-field gestures made it evident that he had directly targeted Smith; Hazlewood, on the other hand, was heard shouting the words in air and not directly to an umpire. While Kohli did not face any repercussions, Hazlewood faced a fine! 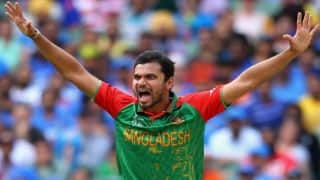