Not often do they find themselves in a position where they are spoilt for choices in the opening position.

A tour of India can test the best of teams. England are trailing 0-2 in the ongoing Test series but there have been a few bright spots. The emergence of the teenager Haseeb Hameed as Alastair Cook’s opening partner has been brightest amongst the lot. Or let s say at least till Mumbai Test that was the case. Solid technique and temperament, matched with a resilient attitude does not complement Hameed’s boyish-looks but the young man or let’s say boy did enough to earn Virat Kohli’s praise. The Indian skipper had no qualms in prophesising him as the “future batting star of English cricket.” Wait. Hameed, the answer to England’s opening woes? He breaks his finger, scores a gritty fifty with it, goes under the knife in London and is ruled out of the series. Indian black magic? No. Bad luck, perhaps. Now comes Keaton Jennings.

Gordon Greenidge and Desmond Haynes, Matthew Hayden and Justin Langer, Cook and Andrew Strauss these pairs feature in the top three opening partnership runs in career. The three teams West Indies, Australia and England’s success can be majorly attributed to these pairs coming out and dominating at the top. In 2011, Strauss led England to the No.1 ranking in Test cricket and the following year a home series loss against South Africa saw them lose the crown, and he retired leaving a vacuum in the top order.

The new captain, and Strauss’ trusted partner, Cook held the fort on one end while a game of musical chair ensued for the other spot.

But light can be spotted at the end of the England’s opening pandemonium tunnel.

Keaton Jennings, Cook s 12th opening partner in over four years, survived early scares on Day One of Mumbai Test a dropped catch and a close shout for leg before.The early nerves were on display.

I woke up at 5 in the morning thinking I missed the bus, he said after the first day s play in Mumbai.

He added more about his anxiety, When the ball looped up to gully my heart was in my mouth and I thought oh no you have got nought in your first innings but thankfully it went to ground and I went from there. At the time I thought the lbw was close. Again, I was really thankful the decision went in my favour instead of the other way round where you get an umpire s call pulled against you and you end up out and in a position at the end of the day when you are not really happy.

He went on to conquer Bhuvneshwar Kumar’s swing, Umesh Yadav’s pace and more importantly the spin trio of Ravichandran Ashwin, Ravindra Jadeja and Jayant Yadav to become England’s 19th debutant centurion. The third Englishman to do so against India, and 14th overall.

Uncomplicated is the word that defines his batting. He does not get to the pitch of the ball, keeping the bat ahead to prevent getting leg before. If it is short, he pulls and cuts without fuss. If it is up, he drives rather pushes with ease.

He keeps it simple and is an avid believer in sweep shot, something some southpaws have done successfully in India.

Cook, Hayden and recently Tom Latham did so with good success.

In another era, an English opener employing reverse sweep on debut would have invited crucifixion demands. The brave chap reverse swept on 96 to reach the elusive mark.

Perhaps that is the South African aspect. Something that comes so naturally to them. Jonty Rhodes, Hansie Cronje, AB de Villiers, Kevin Pietersen and the list goes on…

Son of Ray Jennings, former South Africa and Royal Challengers Bangalore coach, Keaton has captained South Africa’s Under-19 side. Ray was South Africa’s best wicketkeeper when the country spent time in isolation. He played for his country but in unofficial games.

Agonisingly, even his son suffered the same fate. But the important bit lies in him tasting international cricket, even if it is England.

Yet another one slips through our system. Well played Keaton Jennings.

He now becomes the first Englishman to score a hundred on debut after Trott in the Ashes 2009. Trott too is South Africa-born.

Making his First-Class debut for Gauteng in South Africa and then moving to Durham, until the end of 2015 season, Jennings’ career numbers read: 2,670 runs at 28.40.

2016 marked the turnaround. He was named County Championship player of the year 2016. He totalled 1,548 runs at 64.50 for Durham, eventually ending up as the leading run-scorer.

That still propelled his First-Class average to over 35, which by no means is even decent for a player to make a claim for international berth. But numbers do not reveal it all. England rewarded the 24-year-old for improvement.

Once upon a time, not long ago, a Yorkshire opener averaging in his mid-30s was drafted to the national side at 21, making his debut at No.6. He goes by the name Joe Root.

No, he would not play the reverse sweep. But if he were batting with the tail, he would not mind lofting the likes of Ashwin over midwicket for six.

He would gleefully leave deliveries all day long. But he can score a fifty with broken finger.

He is 19. Called Baby Boycs for his Geoffrey Boycott-like patience, in days of ultra modern strokeplay, Hameed is set to carve a niche for himself with orthodoxy.

As an opener in English conditions, playing pace comes naturally to him and along with his father Ismail and batting coach Mark Ramprakash, Hameed has worked on his game against spin. It was a process.

Hameed was training at Dilip Vengsarkar s academy in Mumbai at that time [Around 2010] when he met Vidya Paradkar. Actually, it was Vengsarkarji, who suggested his name to me. He [Hameed] learned his early skills of playing against spin from Paradkar, Ismail told Cricwizz.

Hameed s replacement Jennings scored a ton, something the former failed to do in the preceding 3 Tests. It was however heartening to see the young boy amidst the English fans applauding his competitor with his family.

Look who is supporting England Team from the stands #INDvENG pic.twitter.com/YHbpp3wAcC

His finger required a surgery. But he is back in India rooting for England.

Jennings scored aplenty in English conditions, and has shown good technique against quality Indian spinners in alien conditions. This versatility stands out. But Hameed, once fit, should walk in as Cook s partner for England s next assignment.

Kohli has given his verdict on Hameed and already sees him as the potential great across formats.

Inspiring generation next. Young @HaseebHameed97 is all ears to #TeamIndia captain @imVkohli pic.twitter.com/x1ZFgahwZm

By the time Hameed is of Jennings age, he could be amongst the best in the world. However, Jennings has made a strong case and can be looked as the man to step into the Gary Ballance role. A No. 3 maybe with Root pushing one spot down.

The southpaw from Northamptonshire is still 22, and has critics pointing their swords at him. Cook admitted about his weakness against off-spin but does not write him off.

It s unfair that he is judged on the basis of how he fared after being sprawled in lion s den.

Duckett s struggle against off-spin was apparent but the little man scored over 1,000 runs in County Cricket for two back-to-back years now. His strike rate is remarkable. In fact, his First-Class career strike rate stands at 70.29.

Hameed goes by another nickname ‘Bolton Blocker’ for his defensive technique and even Jennings was a renowned blocker at Durham. He brought the attacking aspect in his game only this summer.

Imagine judging Virender Sehwag after first 2-3 Tests in England? Duckett is no Sehwag but in Country Cricket, he has produced several astounding feats as opener, especially this season to draw such comparison.

With a List A average in excess of 53 and a strike rate of over 101, Duckett, who earlier this year scored a 220 not out against Sri Lanka A, could be an asset for England in ODIs too.

He may have slipped down in the competition ladder in Tests but remember even the likes of Haydens and Laxmans bloomed late in international cricket.

The English side have their focus fixated at the Mumbai Test, eyeing a comeback in the series that they are trailing 0-2 but they will be positive with their finds this season.

Jennings century has already put them in an advantageous position. On a difficult surface, England were 385 for 8. And with the wicket turning, it s advantage England at the moment.

The opening conundrum has hurt them over the years and may have had an impact on Cook s approach as well. This zone seems sorted for now.

Not often do they find themselves in a position where they are spoilt for choices in the opening position. 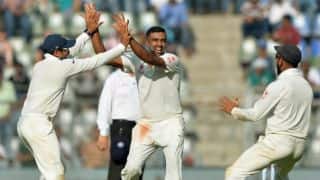