July 19, 1957. Ken Palmer, the fighting young Somerset all-rounder, battled the pace of Wes Hall and Roy Gilchrist to score 23 in difficult conditions. However, little did he know how close to dismemberment he had come until he went back to the pavilion. Arunabha Sengupta remembers the day.

The huge frame with the buttons undone to the chest, with the crucifix dangling and swinging as he ran in, he was a scary sight.

But he was still raw.

When West Indies embarked on the England tour of 1957, he had not yet picked up a single First-Class wicket. His one First-Class match had come against the touring EW Swanton s XI, and Colin Cowdrey and Mickey Stewart had slammed him for 34 in 3 overs in the second innings.

On arrival in England, he was played sparingly. He went wicketless at the Christ Church Ground, Oxford, as the University men successfully negotiated the raw pace. The West Indian attack was heavily dependent on spin, headed by Sonny Ramadhin and supported by a young Garry Sobers.

It was at the Fenner s that Hall flattened the stumps of Geoffrey Cook to claim his first ever First-Class wicket. He did get a few more Cambridge men, 5 in all across two innings, and there were louder whispers about his terrific pace. But again, it was Ramadhin who did the main damage.

The tour was a learning experience for the young fast bowler. Peter May and Colin Cowdrey blunted Ramadhin with their pad-play and England dominated the series, but Hall did not play a single Test.

Roy Gilchrist had a slightly better track record when he landed in England. And perhaps an even nastier reputation. He had played a few more matches and picked up a few more wickets.

He adjusted faster. Against Derbyshire he took his second five wicket haul in First-Class cricket.

Gilchrist played in the first four Tests and picked up just 10 wickets with his average in the unflattering mid-40s. In the tour matches he did just a shade better than Hall, finishing the visit with 37 wickets at 31 apiece.

But as they progressed through the summer, the reputation of the duo as a frighteningly fast pair of bowlers grew more and more ominous. They did not hit the wickets too often, but hit several batsmen rather painfully on their bodies. Black and blue cricketers were many in number during that season across the county grounds of England.

Ken Palmer was in the midst of his first full season for Somerset. He had hit his first fifty early that season against Warwickshire. There was not much success with bat after that. Batting was not really his main job. But, he had not blown oppositions away with the ball either. His medium pace had accounted for a few wickets, but he had not really been very impressive.

Hence, when he was left out for the big match against West Indies at Taunton, Palmer was disappointed but not really surprised.

But then Peter Wight reported unfit. And Palmer greenhorn, just turned 20 was drafted in. His best days were a few years away. He took the field with a lot of zest of youthfulness, eager to bowl at Clyde Walcott and Everton Weekes. There were other names in the line-up, such as Sobers and Rohan Kanhai, but not too many knew of them yet.

That day and the next, Palmer had no opportunity to bowl at the men from the Caribbean Islands. After most of the first day had been washed away by rain, on the second morning play started under overcast skies. Bryan Lobb and the old Australian Bill Alley revelled in such conditions. They swung the ball around, dismissing the visitors for just 78. No bowling change was required. West Indies, down in the series and in morale, were not going through the best of phases.

When Somerset batted, Gilchrist struck several times and was almost unplayable. Hall proved to be a bit expensive even in these conditions, but he did castle the other Australian in the Somerset line-up, Colin McCool. The score read a precarious 27 for 4 when Palmer walked in.

The fast bowling duo had bowled with varying degrees of success, but was proving almost equally adept at firing in the scorching deliveries, striking excruciating blows on the arms, legs and chests of the batsmen.

Against this torrid attack, Palmer played a steady hand that afternoon, remaining unbeaten on 5 when the day ended. Somerset tottered at 38 for 5.

The following morning Palmer was hit on the body several times by these two express bowlers. But he braved it out to extend his score to 23. The first innings lead was obtained. At 87, he was the seventh out going for a run that was not there.

It had been a brave effort. Applause was aplenty as he walked back, and the glances admiring as he took off his pads in the dressing room.

When the bruises on his arm were noticed there were murmurs of appreciation. It grew louder when he took off his shirt and the welts and contusions on the torso came into display.

And then Palmer reached down his trousers to pull out his box.

A mass of red, blue and black across his body, now his face suddenly blanched into white.

Palmer had faced Hall and Gilchrist that morning, playing them confidently, taking numerous body blows. And he had done all that without wearing his box. He had forgotten that precious piece of equipment when he had walked out to bat.

All the while, he had played an innings precariously out of the box.

He had never been more frightened in his life. In retrospect, we can perhaps say for Palmer it was a holding-willey moment.

As the West Indians batted again after conceding a 36-run lead, the 21-year-old Sobers stroked his way to 104. It was Palmer who got him as the match dwindled to a draw.

Both the batting and the bowling of young Palmer improved down the years. Perhaps the incident had made him stronger. He did the double in 1961, scoring his first hundred, against Northamptonshire and taking five wickets in an innings 7 times.

He was coaching in Johannesburg in the winter of 1964-65 when injuries to John Price, Tom Cartwright and David Brown together collaborated in a surprise call up by MJK Smith to bowl for England at Port Elizabeth. His figures, however, were 1 for 113 and 0 for 76; that was the end of his Test career.

But, one wonders how much of all these would have taken place had any of the many deliveries he faced that scary morning sneaked in.

Would he have lived? One cannot be sure.

Son Gary Palmer was born in 1965, and went on to become a fast-medium bowler like his father, playing 54 First-Class matches for Somerset.

Well let us just say that had Hall or Gilchrist managed to ping the unprotected jewels, Somerset County Cricket Club would have ended up at least two members short. Or three. 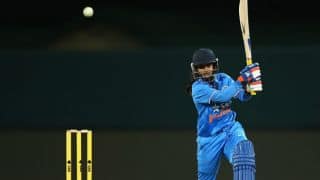