Benjamin bowled alongside Ambrose and Walsh for the West Indies in the 90s.

Kenny Benjamin, born on April 8, 1967, is a former West Indies fast bowler. His middle names were Charlie Griffith, after the former West Indies express bowler of the same name. Benjamin played along with the likes of Curtly Ambrose and Courtney Walsh. Shrikant Shankar looks back at his career.

Kenneth Charlie Griffith Benjamin was born at St John’s in Antigua. His middle names were after former West Indies intimidating fast bowler Charlie Griffith. He is a former fast bowler and played for the West Indies. In domestic cricket, Benjamin played for Leeward Islands in the Caribbean. He played for Easterns and Gauteng in the South Africa. In the English County Championship, Benjamin played for Worcestershire. Benjamin made his debut for the West Indies at the age of 25 in a Test match against South Africa at Bridgetown in Barbados on April 18, 1992. This was the debut Test for South Africa after their reinstatement into international cricket.

There was an issue with Benjamin’s selection into the West Indies team as local fast-medium bowler Anderson Cummins was not included. The match was played in front of an almost empty stadium at the Kensington Oval. There was even a banner that read “No Cummins, no goings”. Benjamin was dismissed for one, coming in at No 9 by Richard Snell in the first innings. He picked up the wickets of Andrew Hudson and Gary Kirsten in South Africa’s first innings. He was then dismissed for seven by Allan Donald. Benjamin did go wicket-less in South Africa’s second innings, but West Indies won a narrow match by 52 runs.

Benjamin made his One-Day International (ODI) debut on December 4, 1992, against Pakistan at Perth. He took the wickets of Rameez Raja and Saleem Malik, but Pakistan won the match. He then played against Pakistan at the Sydney Cricket Ground (SCG) on December 17. He accounted for the wickets of Inzamam-ul-Haq and Wasim Akram as West Indies won by 133 runs. This was in the Benson & Hedges World Series and West Indies made the best-of-three finals against Australia. West Indies won both the finals, but Benjamin could only pick up two wickets in the first final.

He then played one Test against Australia at the Adelaide Oval in January 1993. West Indies won this match by one run. Benjamin did not play a single Test till after one entire year. In between, he did play many ODIs though. His best ODI bowling performance came in that period as well. It was not something to boast about as he only managed to take three wickets for 34 runs. This came against Sri Lanka on October 28, 1993, at Sharjah. His three wickets were Aravinda de Silva, Hashan Tillakaratne and Sanath Jayasuriya. West Indies won the match by eight wickets.

Benjamin was selected in the West Indies squad to play against the visiting England team in 1994. He played all the five Tests. In the first Test at Jamaica, Benjamin ran through the England batting line-up in their first innings. He picked up six wickets for 66 runs as England were bowled out for 234 runs. This remained Benjamin’s best bowling figures in an innings. He took a further two more wickets in the second innings as West Indies won the match with ease. Benjamin then took a total of seven wickets in the second Test at Georgetown as West Indies won by an innings and 44 runs. Brian Lara had scored 167 runs and Jimmy Adams scored 137.

He didn’t pick up any wicket in the third Test at the Port of Spain and took only three wickets at Bridgetown in the fourth Test. He did take four wickets in England’s first innings in the fifth Test at Antigua. This was the match where Lara scored a then world record 375 runs in one innings. Benjamin played three matches in the ODI series in-between the Tests. His next Test was against India in Mumbai at the Wankhede Stadium in November 1994. Benjamin took seven wickets in the whole match, but India managed to win the Test by 96 runs.

The second Test was drawn at Nagpur. The West Indies though won the third and final Test at Mohali by 243 runs. Benjamin took three wickets in India’s first innings and then five in the second. These included Navjot Singh Sidhu, Sachin Tendulkar, Mohammad Azharuddin, Vinod Kambli and Anil Kumble. Benjamin and Walsh bowled 35 overs on the trot in India’s second innings. Cameron Cuffy bowled only two deliveries and took the last wicket. Benjamin only played one ODI in 1995 against New Zealand at Auckland on January 22. He would have to wait almost two years before he played another ODI for West Indies. In the meantime, he was still part of the West Indies’ Test squad.

Benjamin played an away series against New Zealand in the beginning of 1995. He then played all four Tests against Australia in the Caribbean in the Frank Worrell Trophy that same year. His performances were moderate as Australia won the series 2-1. This was the first time West Indies lost a Test series, home or away, in 15 years. He then toured England for a six-match Test series from June onwards. In the first Test at Leeds, Benjamin took four wickets in England’s first innings and one in the second. West Indies won the match by nine wickets. He missed the second Test at Lord’s as England won by 72 runs. He returned for the third Test at Edgbaston. It was the Walsh and Ian Bishop show as West Indies won by an innings and 64 runs.

The fourth Test was won by England by six wickets at Manchester. The fifth Test was played at Nottingham. Benjamin picked up five wickets as England posted 440 runs in their first innings. Lara’s 152 led West Indies to score 417, handing England a slender lead. Benjamin picked up another five wickets in England’s second innings. This was his only 10-wicket match haul in Test cricket. England though declared at 269 for nine, giving West Indies a target of 293 runs to chase with hardly any time left in the Test. The match ended in a draw and Benjamin was the Man of the Match. The sixth Test was also drawn at the Oval and both teams drew the series 2-2.

He was known as a bowler who bowled fast intimidating bouncers at even tail-enders. There was a dearth of Test matches for the West Indies from September 1995 to October 1996. Benjamin’s next Test assignment was against Australia away in a five-match series. He played the first three Tests. Australia won the first Test in Brisbane by 123 runs and the second at the SCG by 124 runs. West Indies did come back to win the third Test at the Melbourne Cricket Ground (MCG) by six wickets. Benjamin took one wicket in Australia’s first innings, but managed three in the second. He did not play the fourth Test at the Adelaide Oval. Australia won the match by an innings and 183 runs. West Indies cantered home with a 10-wicket win in the fifth Test at Perth, but the series was lost 3-2.

Benjamin played in the following ODI tri-series involving Pakistan as well. He only took two wickets in the three ODIs he played. West Indies made it into the three-match finals, but lost 2-0 to Pakistan. Benjamin did not play any of the two matches and that was the end to his ODI career. He took 33 wickets in 26 ODIs at an average of 27.96. Benjamin then played two Tests against the visiting England team. Both the matches were played at Port of Spain after the first Test at Jamaica was called as a draw after only 10.1 overs due to a dangerous track.

The second and third Tests at Port of Spain were the last of Benjamin’s career in Tests. He went wicket-less in his last Test match. Benjamin played 26 Tests and took 92 wickets at an average of 30.27. He took four five-wicket hauls and his strike-rate was 55.7. After his playing career, Benjamin coached the United States of America team as well. Former England captain Michael Vaughan, in his autobiography, praised Benjamin for helping him develop his game against fast bowling. Benjamin played for Sheffield Collegiate, where Vaughan played as a teenager. 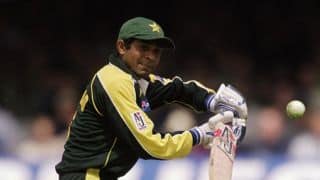 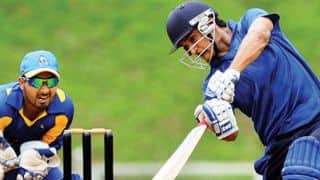