It’s taken five Tests, a great deal of soul searching, unceasing running repairs to increasingly damaged reputations and a dose or two of severe humiliation along the way. But England have succeeded in winning a Test match in Asia for the first time this winter, seizing their final opportunity to do so in a performance reminiscent of the rise to the summit of world cricket that garnered such widespread acclaim. 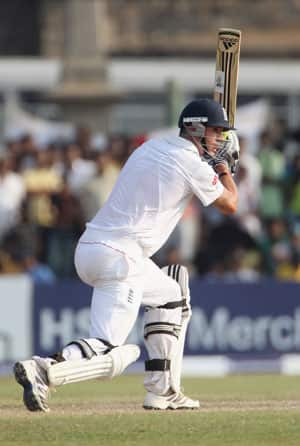 Kevin Pietersen has an impressive Test record of 6,654 runs at an average hovering a shade below the Holy Grail of 50 with 20 centuries ” just three away from becoming the most of any Englishman. Yet, the critics have not acknowledged his greatness © Getty Images

It’s taken five Tests, a great deal of soul searching, unceasing running repairs to increasingly damaged reputations and a dose or two of severe humiliation along the way. But England have succeeded in winning a Test match in Asia for the first time this winter, seizing their final opportunity to do so in a performance reminiscent of the rise to the summit of world cricket that garnered such widespread acclaim.

Numerous reports and blogs have already surfaced covering the issue of whether England have actually learnt to play cricket in the subcontinent – the conclusion to which, with the bat at least, is still very much contentious. I will thus steer clear of the particular debate and instead focus upon the indubitable protagonist of England’s eight wicket win in Colombo, a resplendent Kevin Pietersen.

Pietersen, lest we forget, arrived in Colombo having scored a paltry 100 runs at a rather unbecoming average of 12.50 across England’s overseas winter tours, and under more pressure than any of his colleagues, barring captain Andrew Strauss. Such a suggestion may superficially appear a little perplexing, given that Pietersen had spent the best part of 2011 laying waste to the bowling attacks of Australia, Sri Lanka and India when amassing 821 runs at a shade over 82, but swift and unremitting criticism has proved a perpetual companion of the South African born batsman at the first hint of failure throughout his England tenure.

It is an unfortunate facet of Pietersen’s England career, the source of which is difficult to pinpoint. Pietersen possesses many a characteristic that is at odds to those associated with the quintessential English cricketer. Unequivocal self-belief, little fear of failure and a demeanour suggestive of being the very best at what he does. When coupled with a willow-wielding style that is conspicuous by its absence from the MCC coaching manual, it is plain to see why, except for a handful of English traditionalists, few have failed to acquire the Pietersen taste.

Perhaps it is merely the South African name. We live in one of the most diverse multi-cultural societies in the world here in Great Britain, interacting with fellow human beings of differing race, religion and background on a daily basis, all of whom are widely embraced as British citizens. An acquiescent isle we may be, but that fails to avert the reservations of many over the number of players of South African origin bolstering the English ranks.

It is true that Pietersen is not alone within the current England setup. Strauss, Jonathan Trott and Matt Prior are all affiliated with other cricketing nations in conjunction with the three lions under whose banner they proudly ply their trade, yet scarcely a fraction of the vitriol aimed at Pietersen upon losing his wicket is afforded to those players. That suppresses the South African argument, then.

In reality, a combination of the above likely contributes to the amplified scrutiny Pietersen experiences at the first sight of a flaw. Some may indeed resent the South African association, whilst others undoubtedly dislike the outward displays of bravado. Hitched up sleeves presenting Pietersen’s powerful, tattooed limbs and a propensity for adding an element of extravagance to even the most rudimentary of strokes are all intended as a demonstration of purpose to a fielding side; this is Kevin Pietersen’s stage, not theirs. There will never be a “good morning, my name’s Pietersen” in the manner of a gentlemanly Colin Cowdrey. It hasn’t always sat well with the older generation unused to such pageantry and bluster; plenty are quick to label Pietersen a ‘show pony’ only interested in limited-overs cricket. Yet it is widely acknowledged that nobody puts in more hours of practice.

Preceding his exhibition of imperious magnificence in Colombo, an undercurrent that Pietersen was perhaps operating on borrowed time had existed. Having endured a miserable winter one wouldn’t have had to search too far afield to find an observer firm in this belief, despite the heroics of 2011. An impressive Test record boasting 6,654 runs at an average hovering a shade below the Holy Grail of 50 with 20 centuries – just three away from becoming the most of any Englishman – is seemingly superfluous to many Pietersen critics.

That very issue alone would suggest, at least, that the volatile reaction to Pietersen in almost any innings in which he fails to contribute may just be a direct consequence of his lavish talent. Few batsmen in world cricket are as naturally gifted, though many return similar statistics. Teammates Alastair Cook and Jonathan Trott provide two immediate examples, neither of whom can claim to possess comparable ability to Pietersen yet average very much the same per innings.

With Pietersen, there remains an underlying feeling that there is so much more. Such a comment may appear outlandish given his excellent track record, but it serves to highlight the enormous talent that Pietersen possesses. On numerous occasions there has been a sense that Pietersen has ‘thrown his wicket away’, perhaps trying to dominate a particular bowler in yet another show of bravado and paying a heavy price. Without those, Pietersen would arguably already be England’s leading Test century maker with an average comfortably north of 50.

There is little doubt that Pietersen is capable of becoming an all-time great of both English and world cricket, such is his extraordinary talent. To silence his staunchest critics, though, the soft dismissals would need to stop. But would it be the same Pietersen without the risk? Anything can happen at any moment in a Pietersen innings; suicidal run-outs, bizarre dismissals and an outrageous array of strokes are always on the agenda, making Pietersen conceivably the most watchable batsman in world cricket.

The choice is Pietersen’s alone. Greatness is within his reach but cricket may become a duller place should he attempt to grasp it. For now though his place as England’s No 4 should not be doubted. Here we have one of the most successful and entertaining batsmen to don the three lions in many a year, an astonishing talent likely to have smashed all English Test batting records by the time the curtain falls on an illustrious career. His tendency for combining the sublime with the ridiculous will likely continue to frustrate, but innings such as those in Colombo are a timely reminder that Pietersen remains a match winner for England, and a batsman that is deserving of considerably more slack than he is currently afforded.

Kevin Pietersen is a genius. A flawed genius, yes, but a genius nonetheless that will continue to win Test matches for England. Enjoy him whilst he is here.

IPL 2012: MS Dhoni is not under any kind of pressure, suggests Stephen Fleming