After all the pre-season work, the KXIP squad looks balanced and well-settled. As always, it looks to be a strong side on the paper. But will it deliver at the big stage, is the question.

The thing with players like Virender Sehwag, Glenn Maxwell, David Miller or even Yuvraj Singh is that they either fire on all cylinders or fail miserably. There are, with apologies to Ravi Shastri, no half-measures. This playing style of theirs often rubs on to their teams and has a big say in their fortunes in a particular tournament. All these players are former and/or active members of the Kings XI Punjab (KXIP) franchise in the Indian Premier League (IPL), and have had an impact on KXIP s performance over the years. When these players have fired, KXIP have done well; and when they have not (which is more often), the side has languished somewhere near the bottom of the table.

KXIP s story over the years has been of a few hits and plenty of misses. In nine seasons, thrice the team has finished with the wooden spoon. This includes last two seasons. Only once have KXIP made it to the final, in 2014, under George Bailey s leadership and on one more occasion to the semi-final. That was a long way back though, in the inaugural season with Yuvraj at the helm. The team has had near-misses too, in 2009 and 2011, when they finished fifth amongst 8 teams. On remaining two occasions, they have finished 6th amongst 9 teams in 2012 and 2013.

But a tournament like IPL and in cricket, in general is marked by fluctuating fortunes. Past records and reputations mean little, especially since the teams get a new look every season. It is always a fresh start. So, with IPL 10 less than a week away, KXIP will look to begin afresh, keeping past failures behind. The intent has always there, as they have proved with their actions by taking a fresh guard. Maxwell is going to lead Kings XI in IPL 10 after their doomed campaign in IPL 9 where they had to sack Miller and appoint Murali Vijay as captain halfway through the tournament.

Despite two poor outings in last two seasons, KXIP have retained majority of the players. They have kept the core of their squad same. They had released overseas players Mitchell Johnson, Kyle Abbott and Farhaan Behardien along with Rishi Dhawan ahead of the auction. Then they made some smart buys, bringing in Eoin Morgan, Darren Sammy, Martin Guptill (who has been ruled out of early stages of the tournament due to injury) and uncapped Indian pacer Thangarasu Natarajan, who has had a fairytale journey right from Tamil Nadu Premier League (TNPL) to Ranji Trophy to IPL in his very short career.

After all the pre-season work, the KXIP squad looks balanced and well-settled. As always, it looks to be a strong side on the paper. But will it deliver at the big stage, is the question. Let us assess Punjab s strengths, weaknesses, opportunities and threats through a SWOT analysis ahead of their IPL 10 campaign:

1) Presence of match-winners: This is KXIP s biggest strength. They may not have big stars in their line-up, but they have proven match-winners in their ranks. Maxwell, Miller, Morgan, Sammy, Wriddhiman Saha, Marcus Stoinis, Akshar Patel and Shaun Marsh are all capable of turning matches on their heads. Miller, in particular, has done it on several occasions for his franchise, bringing it back into the contest from the dead. Who can forget his 38-ball century against Royal Challengers Bangalore (RCB) in IPL 2013 that resurrected KXIP from 64 for 4 and helped chase down 191 eventually?

2) The Maxwell-Sehwag combo: Sehwag has been roped in as head of cricket operations at KXIP this year, and he has made his presence felt immediately, with letting Maxwell take over the reins. Both Sehwag and Maxwell play cricket the same way. Their no-holds-barred approach may well have an effect on the side s overall strategy this year. For all you know, they are likely to play aggressive cricket and aim to dominate from the start.

1) Bowling: The obvious chink in the KXIP armour is their bowling attack. Though they have tried to beef it up by including Varun Aaron and Natarajan, but it remains to be seen if Aaron can justify the 2.8-crore-rupees price tag. Aaron, who averages 34.04 from 36 matches, is yet to take a four-for so far and has leaked runs at 8.75. KXIP will have to rely on the two Sharmas Mohit and Sandeep in the pace department with Anureet Singh and Stoinis as the back-up. Furthermore, they replaced injured Vijay with Ishant Sharma in a weird move. KC Cariappa, the mystery spinner, did not live up to the hype last year. Unless he comes to the party, KXIP s spin hopes will largely be pinned on Akshar, with the unheralded Rinku Singh, Rahul Tewatia and Pardeep Sahu playing supporting role along with Maxwell.

2) Ability to self-destruct: KXIP possess some of the biggest hitters of the ball amongst their ranks. But they also possess the unwanted trait of self-destruction. The batsmen are highly prone to implosions, with the likes of Maxwell, Miller, Manan Vohra and Gurkeerat Singh invariably playing on the knife s edge. This is where the calmness of Morgan and Hashim Amla may come in handy; they may be expected to bat around this volatile bunch of batsmen.

1) Fresh guard: It is going to be a huge opportunity for the side to showcase its skills under Maxwell. Kings XI have taken a fresh guard following the unsuccessful past seasons. But IPL 10 will give Maxwell and co. and chance to prove its mettle. Maxwell, in particular, will be eager to prove a point or two to all his detractors. The Big Show will be leading a side at international level for the first time and would want to make it big.

2) New home venue: KXIP will be playing three home matches at a new venue this year. The Holkar Stadium in Indore will host KXIP s matches on April 8 against Rising Pune Supergiant (RPS), on April 10 against Royal Challengers Bangalore (RCB) and on April 20 against Mumbai Indians (MI). Conditions at Holkar Stadium have traditionally been batsmen-friendly. Thanks to short boundaries and a fast outfield, the batsmen have invariably made merry here. Sehwag had an ODI double-ton at Indore. The power hitters in his team will thrive in the conditions, which will provide an excellent opportunity to the side to set its house on order.

1) Too many cooks may spoil the broth: Vijay and Miller were the captains last year. The team also has Morgan, Sammy and Amla, who have led their respective national teams in their ranks (the first two actually clashed in the final of the World T20 last year). Punjab will hope that the presence of so many leaders helps them, but as is often the case, there may be a clash of egos.

Key players: We feel that the auctions provided us with the right opportunity to build a robust squad and overcome all the gaps and requirements which the team initially faced. I am very optimistic with the balance we have achieved with the team this year. Glenn Maxwell, Murali Vijay, David Miller, Wriddhiman Saha will be key players for us, Sehwag had said shortly after taking charge as the team s mentor. Indeed Vijay, Maxwell and Miller are going to be the key players for the team this year as well and how far it goes in the tournament will depend on their form. Vijay, however, got ruled out even before the tournament could start.

Maxwell, who finished with 552 runs from 16 matches in IPL 2014, was the biggest reason why they could make it to the final that year. The management will hope their skipper has a similar season with the bat this time as well. Miller has always been KXIP s biggest match-winner, and they will want him to play just the way he has been over the seasons. As for Saha, the centurion of IPL 2014 final, team would hope he translates his terrific form in Tests to T20 as well.

Prediction: Finding a strong XI with all bases covered early in the tournament is essential and key to success this year. Of course, that is essential for all teams, but given their knack of axing players at the drop of a hat, it is more crucial for KXIP than anyone else.

Their success also depends on how their important players fare this season. They have a slightly weaker Indian contingent, which may be crucial, given that they have to pick seven men from them every time. In fact, it is the Indian players who form the crux of the bowling department. Unless their home talent fires, KXIP will not be able to contain the big hitters from other sides.

The team will want to play Morgan for the period he is available as well as Sammy. However, with Maxwell, Marsh and Miller in the XI, that looks difficult at this time. 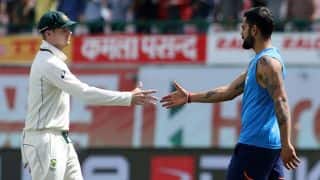 Steven Smith: Not sure if Virat Kohli was hinting at me