Kings XI Punjab (KXIP) sealed their third win against confident Delhi Daredevils (DD) by 9 runs in Match 36 of Indian Premier League (IPL) 2016. KXIP put up an all-round performance from the beginning but the star of the show was Marcus Stoinis with bat and ball. He secured his half-century and also finished with figures of 3 for 40. And then there was Wriddhiman Saha complimenting Stoinis by adding his first fifty in this edition. This win has not helped KXIP to go ahead in points table, but surely has restricted DD to be placed at No.3. DD did try out various combinations, unfortunately were sloppy on the field with missed opportunities in the form of run-outs or misfielding. There were some highlights to focus on from this game. Let’s throw light on some of them: Full Cricket Scorecard: Kings XI Punjab vs Delhi Daredevils, IPL 2016 Match 36 at Mohali

Hashim Amla’s unfortunate debut stint: Amla was called in as replacement for injured Shaun Marsh. A lot was expected from this T20 specialist after his performance in T20 World Cup but it turned out to be disappointing as he was unable to get the required runs on board at the top. He secured mere 1 run off 5 when he was expected to carry forward the momentum after the dismissal of skipper Murali Vijay. His innings was cut short by a run out.

Marcus Stoinis and Wriddhiman Saha’s thrilling fifties: Marcus Stoinis played unbelievably on his way to a fifty, supporting his skipper in the beginning along and later went on to carry the game single-handedly with his brilliant knock of 50 off 42. The impetus was carried forward by Saha securing his first fifty after 2014 edition of IPL. That led the foundation for KXIP to put up a huge total of 181.

Akshar Patel’s innings in death over:  Akshar Patel once again showed his batting prowess this time around at the death overs adding pressure on the pacers like Chris Morris and Mohammed Shami with unexpected blistering shots in 19th and last over of the KXIP inning that added the much needed 12 runs on scoreboard to give competitive edge against DD.

Quinton de Kock and Sanju Samson’s 70-runs opening partnership: Quinton de Kock’s comeback was a much-needed one after DD failed to give their best against Rising Pune Supergiants (RPS). That indeed worked this time around, unfortunately his half-century went in vain at the end of the game. This opening pair were successful putting up a sustainable partnership of 70-run by 7.4 overs, soon after which de Kock was dismissed for 52 off 30 by Akshar Patel.

Sanju Samson and Karun Nair’s 50-runs stand in middle: Sanju Samson seemed to be in control, opening the innings and continued his good form with Karun Nair, who came in at No. 3 adding 23-odd runs to keep the scoreboard ticking. They secured their 50-runs stand by 13.3 overs in style with a boundary towards extra cover. KXIP were once again successful in breaking yet another partnership in the next ball with Samson departing for 49 off 35.

Marcus Stoinis—the show stopper:  Marcus Stoinis bowling figures of 3 for 40 explains his all-round performance that KXIP required some wins in this league. He picked up three crucial wickets with first being of de Kock with a slower delivery that was easily caught by Akshar Patel. The second one was of Samson this time — a perfect delivery with Samson mistiming the ball and landing safely to Glenn Maxwell. The last one was of Sam Billings with a slower short ball going straight to the ‘keeper Wriddhiman Saha, giving Stoinis his third wicket of the match. 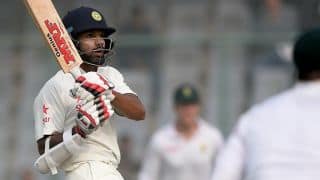