Catch the highlights of the KXIP vs RR IPL 2015 match here.

Rajasthan Royals got off to a perfect start in the IPL 2015 after they beat Kings XI Punjab (KXIP) by 26 runs, courtesy of some excellent all-round performances. KXIP will now have reassess their strategy going into the next match. Pramod Ananth brings you the highlights of the match.

KXIP strike early: One of RR’s start batsmen Ajinkya Rahane was dismissed in the second over of the match for a duck. Rahane had played a series of dot deliveries and he felt the pressure. He danced down the track to a short delivery outside off and the ball went up straight into the hands of mid-off. He was then followed by Sanju Samson, who was adjudged LBW by Sandeep Sharma in the very next over. Full Updates: KXIP vs RR

Mitchell Johnson bowls his first over: Johnson bowled his first over in the ninth over of the innings, which raised a few eyebrows. But it worled out well as Sandeep Sharma and Anureet Singh kept it tight throughout the first spell. FULL SCORECARD: KXIP vs RR

Steven Smith’s graceful innings: The stand-in RR captain Smith looked in sublime touch on his way to a 23-ball 33, with five boundaries punctuating his innings. Just when he looked set to get a big score, he hit the ball straight down the throat of the third man fielder and was dismissed by his Australian teammate Johnson. LIVE STREAMING: KXIP vs RR

KXIP strike with two quick wickets: After taking the wicket of Smith, Johnson struck again in the same over as he was caught behind. RR had lost half their side in the 11th over and were in a spot of bother, considering that they had two new batsmen at the crease.

Deepak Hooda, James Faulkner to the rescue: Hooda, who is an unknown quantity was excellent in his strokeplay as he smashed his way to a 15-ball 30 before he was cleaned up by Anureet Singh. His 17-ball 54-run stand with Faulkner gave KXIP the platform from which they can get a good score.  Faulkner too played his part as he finished his innings with 46 off 33 deliveries.

Anureet Singh’s excellent spell: Anureet finished with excellent figures of 3 for 23 in his four overs and got the wickets of Rahane, Faulkner and Hooda at crucial times. He has certainly justified his selection in the game after a performance like this.

Virender Sehwag out off first delivery: Sehwag was sent back into the hut very early in his innings as he fished outside off of a Tim Southee delivery, easily pouched by Sanju Samson behind the wicket. The entire crowd and the team would have been disappointed to see Sehewag get out like that.

Wriddhiman Saha’s Bizarre run-out: Saha was run-out after a Southee bowled a ball down the leg side. It was well taken behind the wickets by Samson, who had a shy at the wickets. He hit the wickets and Saha was well short of his crease. The fact that Saha was attempting the run was a big surprise and KXIP were not given a run for the wide, adding insult to injury.

Akshar Patel’s promotion to No.5: Skipper George Bailey, perhaps made a bad move when he promoted Akshar ahead of himself in the batting order. Akshar ate away too many deliveries and did not make much impact with the bat as he was dismissed for a very slow 24, which might have cost them the match.

RR struck at regular intervals: Despite a good innings by Murali Vijay (37), KXIP lost wickets just when a partnership would start to build. Hard-hitting Glenn Maxwell, Vijay and David Miller were dismissed with the required run-rate well over seven runs an over.

James Faulkner’s all-round show: Faulkner scored a 33-ball 46 with two fours and three sixes punctuating his innings. He also picked up three wickets with the ball for just 26 runs and was easily the best performer of the match. This is a good beginning from the all-rounder and has set the pace for the reminder of the tournament.

RR register emphatic win: RR put in a professional performance and won the game by 26 runs. They can go into the next game and the rest of the tournament with lots of confidence. 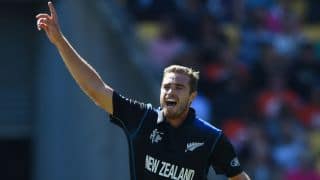