The young opener has decided to add the name to bolster his chances for selection.

Karnataka and South Zone batsman KL Rahul has decided to add an additional word to his name. Rahul is planning to add ‘Dravid’ to his name at last to improve his chances of playing for the Indian team. The opener has had a terrific year scoring over 1,000 runs in last domestic season. During the Duleep Trophy final, he became the 10th batsman to score a century in each innings of a Duleep Trophy match.

However the stylish right-hander is not satisfied. Rahul has decided to add Dravid to his name not just to make it to the squad but also find a place in the squad for the Australia Test series and score well (95 we assume!). Rahul revealed that famous astrologer Bejahan Daruwalla saw that adding an extra ‘a’ in Rahul wouldn’t have sufficed. “The word Dravid would have made a difference. The fact that he is also a Karnataka player and my role-model ensured that my stars will be in the right place whenever the selectors pick the squad,” Rahul recounted after speaking to Daruwalla.

Rahul hoped that the change in name will also help him to add an elegant square-cut to his already impressive off-side play and wrist-work. However, it wasn’t an easy decision to change his identity. Rahul had almost decided not to fiddle with his name as it could have possibly even affected his purple patch. But one moment on Day Five of the final, changed it all

“While walking back to the pavilion after being dismissed by Pankaj Singh in the second innings, a scary thought passed my mind. What if I make it to the squad but never get to play? And years later, get one chance on a tough pitch. I do want to see a hash tag on Twitter ‘#UnluckyRahul’, ‘#YoRahulSoUnlucky’. That was the thought which confirmed my decision.

The Indian team for Australia will be picked by the selectors in a week’s time. It will be interesting to see whether Rahul’s stars really shine like Dravid. 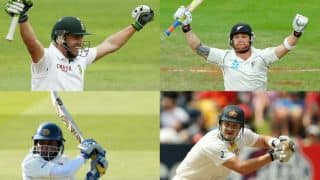