As their journey ends this season, Suvajit Mustafi reflects on individual players’ performance from the KKR camp and rates them accordingly out of 10.

Kolkata Knight Riders (KKR) failed to cross the Mumbai Indians (MI) hurdle as they crashed out of Indian Premier League (IPL) 2017 after a loss in the Qualifier 2 at M Chinnaswamy Stadium, Bengaluru. They kick-started their campaign with a bang and for a major part of the tournament competed with MI for a top of the table position, however, they gave it away towards the end of the league stages to slump to the fourth position.

A spot to Qualifier 1 knocked their door for a major part of the tournament but KKR have themselves to blame for letting that opportunity slip away. Nevertheless, Gautam Gambhir’s knights put up some extraordinary show in their month-and-half journey this season. From inflicting a 10-wicket humiliating defeat against Gujarat Lions (GL) to cleaning out Royal Challengers Bangalore (RCB) for 49, KKR provided this tournament with some of its most memorable moments.

As their journey ends this season, Suvajit Mustafi reflects on individual players’ performance from the KKR camp and rates them accordingly out of 10.

KKR will rue the fact that Coulter-Nile did not play enough games for them. However, in the ones he played he created an impact. In fact, he won three Man of Match awards this season. Coulter-Nile had to wait for his chance. Little could KKR experiment at the start of the tournament with Trent Boult and Chris Woakes as the other two overseas bowlers.

Had he played most of the games, Coulter-Nile surely would have been a Purple Cap contender. His finest performance came against RCB where his three-for triggered the collapse as they folded for a record low of 49. The pace and bounce at the newly-laid Eden Gardens track added as a catalyst but the Western Australian capitalised on it well.

Unfortunately, he was injured in the game against Rising Pune Supergiant (RPS) after being struck on the helmet grille. That led to him missing a few crucial games.

Gambhir led from the front and that has been a story in almost every season since he took KKR’s charge. Fearless like always, Gambhir did not shy away from experimenting and also played a few crucial knocks. His calmness with the bat saw KKR chase down a big total at Pune and then saw them through the rain-curtailed Eliminator against Sunrisers Hyderabad (SRH).

He was not as successful in the middle-order when compared to opening but he stuck to the plan in order to accommodate the power-hitters — Chris Lynn and Sunil Narine at the top.

However, KKR would have liked their captain to take charge and finish off some of the game they lost in the league stage. Even in the Qualifier 2, with the side three down inside Powerplay, the need for Gambhir was to show more maturity at the crease but he soon perished.

A stalwart for KKR for five seasons, Narine continues to be a revelation. Grabbing the spotlight due to his mystery bowling during the early days, Narine now turned heads with his batting and that too at the top order.

He provided KKR with brisk starts often catching the opponent off-guard. His exploits included a record 15-ball fifty against RCB. Despite his newfound batting mojo, Narine continued to excel with his bowling. He may not have bagged the desired number of wickets but his economy rate throughout the season remained under seven.

He was devastating at the top of the order. His injury during the initial phase of the tournament did not help KKR especially because of the form he was in. He returned and continued to excel. His early dismissals in the playoffs hurt KKR.

Lynn was undoubtedly the most entertaining batsman in this edition of IPL.

Umesh clearly is the most improved Indian cricketer this season. Extremely fit, Umesh continues to clock good pace and often responded with wickets. Though he has leaked runs at the death, Umesh played his role well. He has also added a deceptive slower ball to his armoury. Indian cricket will go to benefit in ICC Champions Trophy if Umesh continues his form.

Despite being successful at top of the order, Uthappa had to move to the middle order to strengthen it. He started with a bang and KKR benefitted from his consistency. He belted five fifties and all of them came at a brilliant strike rate. An injury halted his run, there were a few missed games and he disappointed on his return. Like Lynn, Uthappa’s failure in the playoffs and the end stages of league hurt KKR. Also, he continued to remain below par behind the stumps.

Considering the fact that he bowled a lot during Powerplay and also at death, Woakes’ numbers look impressive. However, the English all-rounder was not as consistent as KKR would have liked. There were the occasional highs and then some lows. Also, Woakes failed to get going with the bat, managing only 46 runs at 11.50 and a strike rate below 100.

Like Uthappa, his state mate Pandey started off brilliantly. His calm fifty helped KKR seal a thriller against Delhi Daredevils (DD). However, as the tournament progressed Pandey’s form dipped and that impacted KKR’s run. At the fag end, an injury ruled him out of the tournament as well as Champions Trophy. He was KKR’s fulcrum in the lower middle-order and with him gone, their chances took a jolt.

The young Chinaman bowler had his moments. He bamboozled MS Dhoni twice in the tournament. He was consistent but did not claim the desired number of wickets. It was unfortunate that Kuldeep had to miss out on the playoffs to accommodate his state mate Piyush Chawla. Maybe, KKR missed out a trick on playing both of them in the Qualifier 2.

His three-for against Mumbai Indians in the first round clash at Wankhede Stadium kept Kolkata in the hunt for long. He has been good in patches but nothing spectacular.

Chawla lost his place to Kuldeep but in opportunities, he got he did little to impress. His moments came in the playoffs. He got the big wicket of David Warner that played a massive role in KKR’s triumph in Eliminator. Even in the low-scoring Qualifier 2, his early strikes that sent back Lendl Simmons and Ambati Rayudu kept KKR in the hunt for a while.

With Chawla’s experience, KKR had expected more from the seasoned campaigner.

He did not get enough opportunities but did not disappoint either. He batted sensibly with Gambhir in the 48-run chase in the Eliminator against Sunrisers Hyderabad (SRH). He was involved in a vital 56-run stand with Suryakumar Yadav in the Qualifier 2 that helped KKR register a score in excess of 100. However, his wicket triggered another collapse. Also, his fielding was not up to the mark

Boult was amongst the unluckiest bowlers this season. Wickets simply eluded him. He did not get enough chances. When he got, he bowled reasonably well but with very little luck.

He got only a game. He hit the winning boundary. That is it.

Filling the massive boots of Andre Russell and consistently getting a nod over Shakib Al Hasan, much was expected from de Grandhomme. He started off poorly but in between came a string of consistent performances. However, there wasn’t any impactful show with either bat or ball. De Grandhomme was one of the stars in KKR’s famous victory against RCB at Kolkata, claiming figures of 1.4-0-4-3.

The Saurashtra batsman filled up for Uthappa in a few games but he hardly did anything noteworthy.

Perhaps, this was the setback of the season for KKR. Yusuf with his bundle of experience only disappointed. Barring his match-defining stand with Pandey against Delhi Daredevils (DD), Yusuf hardly did anything of note. In the game against MI at Eden, Yusuf’s madness cost KKR a game, in turn, two points, that could have seen them finish at top of the table. Chasing 174, Yusuf walked in at 53 for 4 in the seventh over. He belted a 7-ball 20 and gave away his wicket when the need was to support Pandey at the other end.

The madness continued in the Eliminator as well. His first ball run out brought jitters in the KKR camp. A string of failures and the above saw him lose his place in the Qualifier 2. Have we seen the last of Yusuf in the IPL? My guess will be yes.

Another massive disappointment this season was Suryakumar’s show with the bat. Though he made late amends with his quick 31 not out against RPS and 30 in the Qualifier 2 but KKR expected much more from their vice-captain. Also, he was terrible in the field as well.

The Bangladeshi superstar got only a game to play and he did not make any impact. A part of his restricted appearance can be attributed to the change of Eden track, which is now more conducive to pacers than spinners.

The team gets seven-and-half for finishing third in the tournament.

Suvajit Mustafi consumes cricket for lunch, fiction for dinner and munches numerous other snacks throughout the day. Yes, a jack of several trades, all Suvajit dreamt of was being India’s World Cup winning skipper but ended up being a sports writer, author, screenwriter, director, copywriter, graphic designer, sports marketer, strategist, entrepreneur, philosopher and traveller. Donning so many hats, it’s cricket which gives him the ultimate high and where he finds solace. He can be followed at @RibsGully [Twitter] and rivu7 [Facebook].
First Published on May 21, 2017 8:30 AM IST
Last updated on May 21, 2017 8:30 AM IST
TOPICS:
Chris Lynn Gautam Gambhir Indian Premier League Indian Premier League 2017 IPL IPL 10 IPL 2017 KKR Kolkata Knight Riders Manish Pandey Sunil Narine
SERIES:
Indian Premier League, 2017 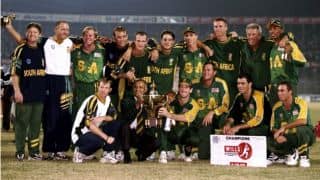 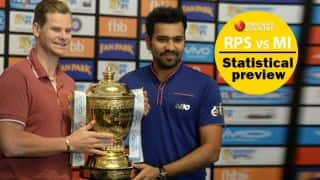