There was the Virat Kohli buzz to start with. The No.1 and No.2 Test bowlers were on display, the No.1 Test batsman slammed another ton. The setting for the fourth and the final Test is the spectacular HPCA Stadium in Dharamsala. Eclipsing them all, the spotlight grabber was a 22-year-old debutant by the name of Kuldeep Yadav, who became the first Chinaman bowler to play Tests (men’s) for India. His four-for restricted Australia to 300 on what was a very good batting surface. India were 0 for 0 at stumps on Day One. Suvajit Mustafi looks at the plays of the day and bring you the highlights. FULL CRICKET SCORECARD: India vs Australia, 4th Test at Dharamsala

Kohli’s pain, Rahane’s gain: Indian fans woke up with anxiety. So did the Australian media I believe. Kohli gets all the eyeballs, the TRPs soar because of him. Will he make it was the question? He did not. The shoulder injury he sustained while fielding on Day One at Ranchi forced him out of the final Test. Ajinkya Rahane walked out for the toss. He became India’s 33rd Test captain and the first from Mumbai since Sachin Tendulkar. Full Cricket Updates, India vs Australia 2017, 4th Test at Dharamsala, Day 1

He did a decent job though. Or let us say, Kuldeep brought India back in the game. He under-bowled Jadeja otherwise. However, he was good with field placements.

The ‘expensive’ drop: Bhuvneshwar Kumar has a knack of making superlative comebacks. He almost had his Sunrisers Hyderabad’s captain out the first ball of the Test. He got Warner to push at an away going delivery but Karun Nair at third slip dropped a regulation catch. Warner made India pay severely. He slammed 56 and added 134 for the second wicket with Australian skipper Steven Smith.

Commentators’ curse: The commentators were going gaga over how impressive Matt Renshaw has been in this tour. In was only the second over of the day when the southpaw went for an ambitious on-drive. Umesh Yadav got the ball to move in sharply to uproot the youngster’s stumps.

The high profile drinks carrier: Can Kohli be out of action for long? As soon as he got the opportunity to take the centre stage, he ran in with the drinks much to the crowd’s glee.

Perhaps the first high profile drinks carrier after this man. A man he is often compared with.

The Kuldeep moment: After Ravichandran Ashwin and Jadeja, Warner found a new nemesis in Kuldeep, who got the better of Australian vice-captain as his maiden Test wicket. Kuldeep surprised Warner with the extra bounce as the edge flew to Rahane at slip. But this isn’t about Warner. This is about the 22-year-old debutant, whom not many expected to be India’s 288th Test player today. The emotions ran high.

An emotional moment for @imkuldeep18 as he gets his first Test wicket #INDvAUS pic.twitter.com/jeizXiR8OW

Kuldeep aided by ‘divine intervention’: Australia dominated the first session and it seemed the track had 500 written on it. Kuldeep’s strikes helped India to come back. He was aided by another Yaduvanshi, Umesh.

Huge moment this for young @imkuldeep18 as he receives his Test cap #INDvAUS #TeamIndia pic.twitter.com/GvRQVUAfj8

Ravi Shastri called the former India leg-spinner three gods Siva, Rama and Krishnan. When Kuldeep got his third wicket, a brilliant googly to clean up Glenn Maxwell, Shastri mentioned in the commentary box that the young Chinaman bowler has got a wicket for each one of the gods.

There were four to be precise. Shastri probably forgot his first name ‘Laxman’. Never mind, Kuldeep appeased the Ramayana hero by claiming the fourth wicket (of Pat Cummins). Kuldeep’s 4 for 68 is now the second best figures by an Indian left-arm spinner on Test debut. Dileep Doshi got 6 for 103.

Kuldeep was truly out of the syllabus for the Australian batsmen who had prepared for the top two Test bowlers Jadeja and Ashwin. But then there was a certain gentleman named Steven Smith.

The Smith habit: If he does not stop, Smith may end up as cricket’s second greatest batsman. Hundreds are like a habit for this young bloke from New South Wales. Smith’s hundred at Ranchi was all about grit and composure, quite contrasting to that approach, at Dharamsala, Smith looked to attack right from the stand.

In what was a brilliant exhibition of batting, Smith slammed 14 boundaries en route 111, his 20th century in Tests. He fell at the score of 208 and became the first ever Australian skipper to be dismissed for Nelson. That was courtesy…

…an Ashwin special: Ashwin’s Rising Pune Supergiants (RPS) skipper has a liking for the former’s bowling. Ashwin has struggled big time against Smith throughout this tour. Ashwin produced a gem to send the Australian skipper walking back. The ball from Ashwin held its line, Smith played it for an off-break, only to edge it to Rahane at first slip. The Indian skipper took a sharp low catch.

With that wicket, Ashwin now has 79 wickets this season, the most in one season. He surpassed Dale Steyn, who claimed 78 in the 2007-08 season.

Wade’s fifty and the Australian ‘brain’ syndrome: Premature celebrations are generally a Bangladeshi thing but Australians fell in the trap. They celebrated Matthew Wade’s fifty even before the wicket-keeper batsman reached the milestone. First Renshaw’s tummy, then Smith’s brain; Australia continue to surprise.

However, taking nothing away from Wade’s grit, the knock helped Australia reach the 300-mark. Wade showed tremendous application. Cricket writer Jarrod Kimber tweeted, “Huge innings this for Wade. He’s been sub Nevill in every way bar mouth since his comeback.”

The tongue did enough. It was high time that the gloves and the bat did its bit of talking.

No Kohli, No DRS: There was no Kohli on the field. There was not much drama either. Mentioning drama; the biggest surprise was the fact that no side made a single referral. 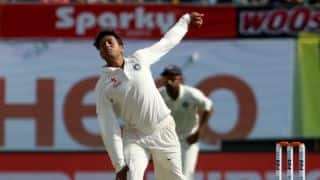 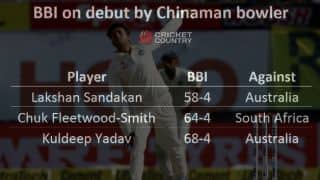